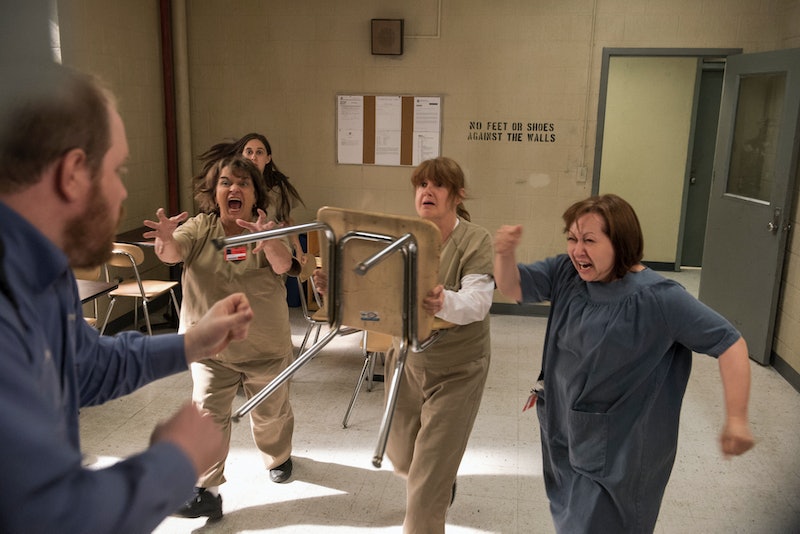 After four seasons and four years, Netflix's prison drama Orange Is the New Black was getting a little predictable, with each baker's dozen episodes taking a look at the lives of female prisoners in upstate New York and each episode structured around a flashback that told the audience something unexpected about how one character wound up in prison. But, at the end of the fourth season, when Taystee discovered that Captuo gave a public statement blaming Poussey for her own death, the prisoners broke out of the dormitories where they were being held, physically overpowered the guards, and began a riot. Season 4 cuts off there, but how many episodes will the riot last on Orange Is the New Black Season 5? The series is making a huge stylistic change, slowing down the timeline considerably in order to make the Litchfield riot last for the entire 13-episode season.

And as Danielle Brooks revealed on the SAG Awards red carpet in January, Orange Is the New Black Season 5 takes place over the course of just three days, as the women riot over the death of Poussey and the abuses of the correctional officers at the end of Season 4. Brooks' warning? "Get your popcorn, your tissues [ready]" before sitting down to watch the season, because a shortened timeline does not mean the show will he holding back.

And as Brooks tells Newsweek, this could be Taystee's last season on OITNB. "It’s one thing to think of a riot, but if you really think of it, whoever started that has to be willing to die. You started a riot! In a prison! She wants to get justice for her girl and she will do anything to do that." If Taystee winds up being killed or leaving the show because she is moved to a maximum security prison, it's even more understandable why the timeline has been narrowed to this degree — she's one of the series' most crucial characters.

As Brooks told The Hollywood Reporter after Season 4, her character is prepared to fight to avenge Poussey's unjust death at the hands of CO Bayley. "Taystee has nothing to lose, she’s lost everything that she cared so deeply about. It’s time to fight," Brooks explains. After the show went to such great pains to establish all of the different cliques and characters with different motivations going into the riot, depicting all of their reactions to the events must realistically take up thirteen hours, so it makes sense that the show isn't taking place over its usual ambiguous time frame.

According to Taylor Schilling, "although we’ve been watching for five years, only 10 months have passed in Litchfield," reports The Independent. Before Season 5, Piper was only sentenced to thirteen months in prison, but after participating in a riot, she could find herself behind bars for a lot longer. Perhaps that's another reason behind making the whole season just three days long — the aftermath of a riot would mean these women would spend a lot of time in court. If the post-riot rearrangements happen offscreen, then Season 6 (which was ordered back in early 2016) can start with the new status quo established and the series' regular timeline back to eating up several months over the course of 13 episodes, rather than just 72 hours.

Unfortunately, some critics claim that the much shorter timeline is an unsuccessful experiment, but with the challenge of depicting a riot with only 13 episodes and so many characters, the Orange Is the New Black writers decided on an elegant solution for how to dedicate enough time to the rebellion while still resolving it within a single season. The whole season may only last three days, but that means you can't accuse them of writing their way into this conflict without spending an adequate amount of time unpacking what a Litchfield Penitentiary riot means for the future of the show.

More like this
The 'First Kill' Cast & Fans Are Disappointed Over The Show’s Cancellation
By Brad Witter and Sophia Moore
Does 'Locke & Key’s Ending Mean There Could Be A Season 4?
By Sophia Moore
‘The Simpsons’ Will *Finally* Address How They “Predict The Future”
By Sam Ramsden
The 'Black Bird' Stars Are Both Heading Back To Apple TV+
By Brad Witter
Get Even More From Bustle — Sign Up For The Newsletter