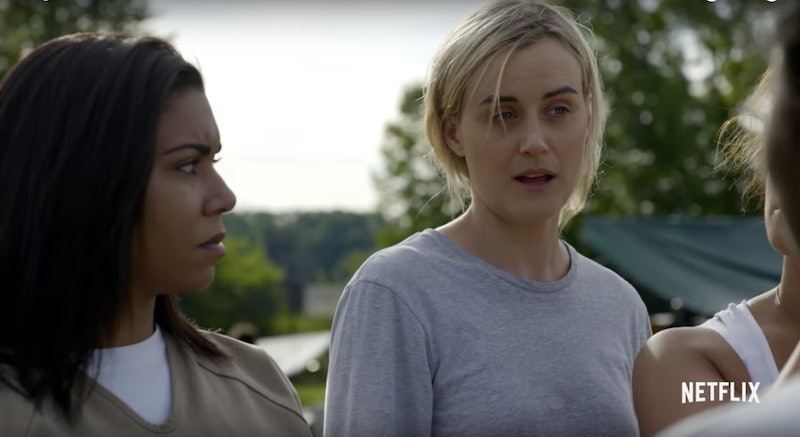 This is a weird time we're in right now, and it's easy to get overwhelmed, but the star of one of your favorite Netflix shows is here to help. Taylor Schilling says that storytelling is a form of activism, and as the star of a show that puts its money where its mouth is when it comes to speaking out, she would know. Over its four-going-into-five seasons, Orange is the New Black has taken on a wide swath of topics, including gender equality and diversity onscreen, racism, transgender rights, the fluidity of sexuality, the prison system, class struggles in our society, speaking truth to power, and much, much more.

But somehow, even with all those issues floating around, I believe the most honest and affecting moments of the show are sometimes just conversations between two characters getting to know each other better. That's when I feel like we learn the most and the show feels the most relatable. This seems to be a point that Schilling agrees on. The actor, of course, plays Litchfield inmate Piper Chapman on the dramedy, and she shared how important she feels the show and its varied storylines are during a Netflix junket on May 9.

"One thing that I love, that I heard [OITNB creator] Jenji [Kohan] say to me once is that the show is inherently political, but that she does not describe herself as an activist but rather as a storyteller," Schilling told a group of reporters at the junket. "And now I'm paraphrasing, so you'll have to fact check whatever she said, but that the deeper you dive into the personal and the more rigorous you are about honestly telling someone's story, the more universal it becomes. And then that becomes a political act, because you have people seeing themselves in people they once viewed as other."

And it's true — when you tell a story, or even when you listen to a story, you naturally put yourself in that person's shoes and begin to feel some empathy. And with such a wide range of characters represented in Orange is the New Black, there are a lot of different shoes to choose from, which is a really important thing.

Instead of having just one woman in a cast, or one person of color, or one queer character, and so on — basically an ambassador tasked with somehow containing and representing an entire group — OITNB instead represents entire groups. It takes the pressure off any one individual to be the token "other" in the show, and allows Jenji Kohan to write normal scenes with normal people talking to each other in a normal way, which then becomes a full-on radical act.

As Schilling explains, "That is radically political, but I don't think the genesis of that is the same thing as running for political office, so it's telling a story as truthfully and close to the bone [as possible] to get into the marrow. And then hopefully that's what great art does — it sparks a conversation because everyone can see themselves in it."

That's the power of storytelling: to restore empathy to the world. Schilling is right that it's a radical act — a necessary act and a radical one. And I'm so grateful to the cast and crew of Orange is the New Black for recognizing that and bringing this kind of energy and intention into the world.