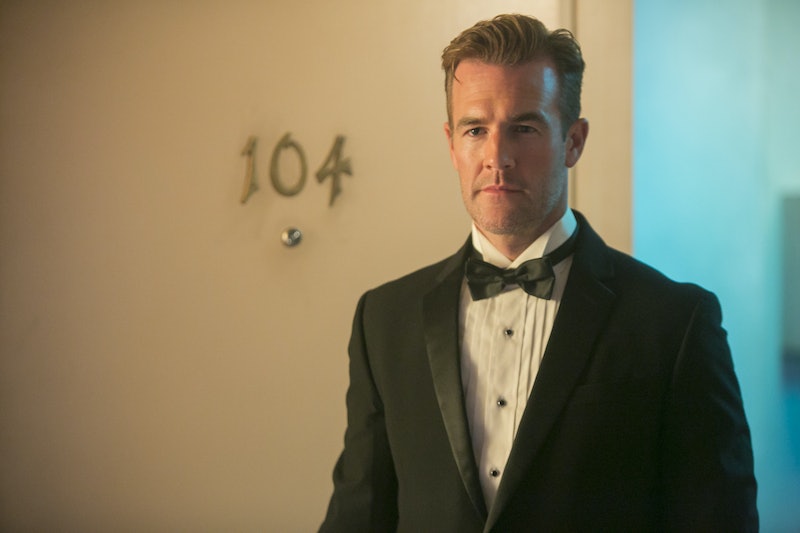 With the penultimate season of Game Of Thrones well underway and the sophomore season of buzzy comedy Insecure newly premiered, HBO is taking time for a debut of a more low-key variety: a new anthology from filmmaking brothers Jay and Mark Duplass (Togetherness). But how many episodes is Room 104? How many nights will audiences need to make their reservation to stay in this hotel where seemingly anything can happen?

According to Room 104's official episode listings, audiences will be able to check into the anthology series for 12 installments, starting on Friday, July 28, and ending on Oct. 13. Each episode will be a half-hour long, and will feature a brand new cast telling a brand new story every week. The only thing each episode will have in common with the others is the fact that they all take place within the confines of the same hotel room.

But just in case you're worried that Room 104 will be 12 weeks of boring stories about room service, uncomfortable beds, and crappy TV channels… well, don't be. The Duplass brothers are using the anthology format to experiment with genre, time period, and tone, producing episodes that vary from horror to comedy to action to relationship drama to political commentary to silent dance routine and more.

To be sure, not all of these genres will appeal to everyone. So, before you pick up your room key, here's a brief description of all 12 Room 104 episodes, so you can decide in advance which ones tickle your fancy.

Watch if… you think creepy demon children are totally the cutest.

Summary: "A pizza delivery boy gets caught up in a couple's twisted games."

Summary: "A woman seeking salvation is visited by a cult priest promising to help her transcend the ordinary world for another realm."

Watch if… you loved The Leftovers finale's ambiguous story about traveling to another dimension.

Summary: "A visitor in Room 104 seeks advice about his marital troubles from a long-lost friend."

Watch if… you're a fan of Duplass' similarly relationship-challenged character Josh Pfefferman on Transparent.

Summary: "In 1997, a son must teach his mother how to use the Internet over the phone after leaving behind an important document on his laptop."

Watch if… you've ever suffered through the agonizing torture of trying to explain modern technology to a parent.

Summary: "The past and present come face to face when a housekeeper reconnects with her younger self."

Watch if… you love modern dance.

Starring: Nat Wolff (The Fault In Our Stars)

Watch if… you still listen to the Book Of Mormon soundtrack on repeat.

Summary: "In 1969, the sole survivor of a plane crash is faced with a decision: go back to the life she had or seize the opportunity to start anew."

Watch if… you find catharsis in stories about personal tragedy and grief.

Summary: "When an aging Croatian tennis player reveals memories of his tortured past to a housekeeper, an unlikely bond is formed."

Watch if… your heart is warmed by stories of unlikely friendships and odd-couple bonding.

Summary: "Two young men plotting to disrupt a political convention are interrupted by nerves... and an AC repairman.

Watch if… you're nervous about how American Horror Story: Cult will handle a story about politics.

Watch if… you think pretty much every HBO show would be improved by the inclusion of some badass MMA fighters.

Summary: "An octogenarian couple returns to Room 104 to relive their first night together."

Watch if… you automatically cry at movies about elderly people in love.

Even if you're not a fan of horror or MMA or modern dance, it looks like there's a wide enough variety of genres on display in Room 104 to guarantee that there will be at least something for everyone to enjoy.