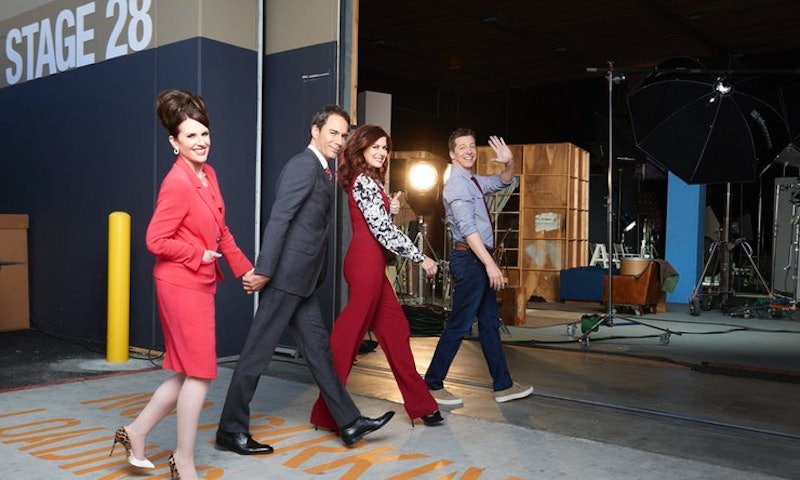 Fans are not just getting a brief revival of their favorite Must See TV sitcom this fall; in fact, it's seems like it could be here to stay. How many episodes is the Will & Grace revival? This won't be a quick reboot that ends before anyone truly has a chance to bask in the nostalgia of it all.

Originally, back in January of this year, The Hollywood Reporter reported that the Will & Grace revival had been greenlit for a 10-episode run, which is less than half of the standard episode count for this particular series (throughout the 8 previous seasons of the original run, the length of each season varied between 22 and 27 episodes). But in the Peak TV era, shorter seasons are more common, and it would still be a good amount of time to really tell a story. In August, Variety that not only was the first season of the Will & Grace revival set for a 16-episode season, but that NBC has also already ordered another season to follow it.

And showrunners David Kohan and Max Mutchnick are not ruling out the possibility of taking this revival past the those confirmed episodes. Kohan told THR, "As long as we feel that we can maintain a level of quality that we feel good about it. If it started to dip, we would stop. If we felt like it could keep going then we would encourage everybody to let us keep going."

Every time a revival of a beloved series comes rolling around, fans and critics inevitably question whether it will properly respect the original run that made it so successful in the first place, a perfect example being Gilmore Girls: A Year in The Life. It is great to see that Kohan and Mutchnick respect the series and respect the fan enough to say that if the quality of the storytelling starts to drop away from what fans have come to expect from the series, that they are willing to concede and shut it down to avoid really messing up something that so many people really enjoy and love.

The fact that they have so much time to work on the two revival seasons, means that there is a real possibility of delving into stories that may include characters who either recurred, guested, or made cameos on the original series. Some nostalgia-filled posts to Debra Messing's Instagram confirmed that Bobby Cannavale, who played Will's cop ex-boyfriend Vince, will definitely be making an appearance. And Harry Connick Jr., who played Grace's ex-husband, will also be returning briefly to reprise his role. Expect to see more faces from the first eight seasons of Will & Grace as the revival moves along. And the next season could reasonably draw in even more returns.

Since Entertainment Weekly reported that the revival would ignore the events that occurred in the original Will & Grace series finale, Will and Grace are no longer married to Vince and Leo and they no longer have children when the revival beings. With all of the time the writers are going to have to built these stories back up for the returning seasons, maybe fans will actually get to see more of Vince and Leo than initially was planned or expected. Maybe Will and Grace will both move on with other relationships and end up happily committed to other people. Or maybe they'll just stay single together forever.

Whatever transpires throughout this 29-episode confirmed run of the revival, it's bound to bring back a lot of memories. Time will tell whether more seasons of the Will & Grace revival are warranted, but it sure is an exciting prospect right now that this show could go on for another eight years.