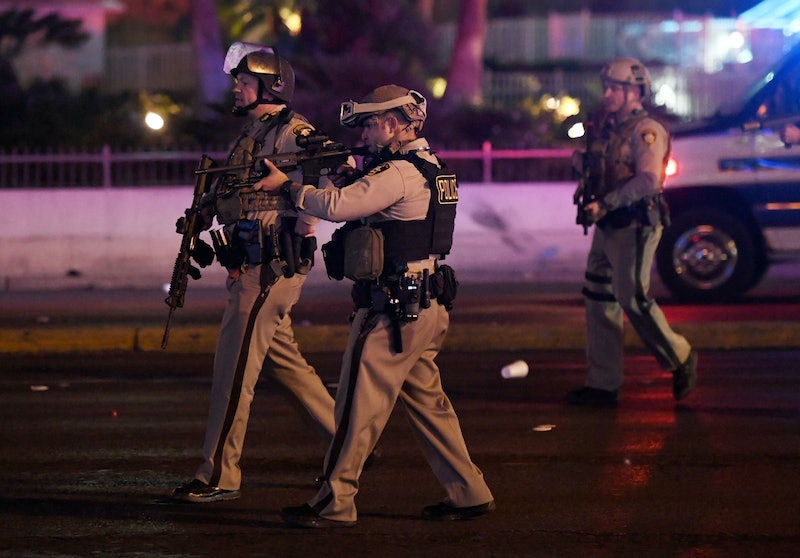 The mass shooting in Las Vegas on Oct. 1 has officially been deemed the deadliest in American history, but tragic events like this one have become all too common. At this point, according to Vox, there are more guns than people in the United States, an overwhelming statistic for those hoping to curb gun violence with new regulations. So exactly how many guns are there in America at the present moment? It's difficult to calculate, but in 2015, The Washington Post estimated the number of firearms nationwide at 357 million. That's already a staggering figure, but it becomes even more so when compared with the country's population, which at that time was 317 million.

The data they were pulling comes from a 2015 report from the Bureau of Alcohol, Tobacco, Firearms and Explosives that uses data from 1986 to 2013. That means that four years ago, there were already 40 million more guns than there were people in this country. And that doesn't even take into account illegal gun activity. The 357 million figure comes from federal manufacturing tallies, from subtracting the number of firearm exports from the number of firearms imported to and remaining in the United States after manufacture. It's the data that many sources use when calculating the number of guns in America, but it isn't exact.

One thing that no estimate can account for is the unregistered firearms that constantly cross our borders, in both directions. These transactions circumvent the law and go unmonitored, so they're impossible to include in any federal accounting. Similarly, the number of guns that have become unusable through damage, destruction, or loss is also an unknown value. And it's one that some critics think that ATF isn't taking seriously enough in its counts.

In the Washington Post article cited above, Duke University professor Philip J. Cook estimated that as many as one percent of all guns are rendered unusable every year. It might sound like a small amount, but the record-keeping goes back as far as 1899. So trimming the the civilian firearm estimates by one percent a year actually has a huge affect; when the totals are reconsidered with this theory in mind, it brings the number to around 245 million as of 2011.

That figure is on the low end of estimates, and taking into account a 2011 U.S. population of 311.7 million, would translate out to 79 guns per 100 people. Using the more standardized 357 million number, in 2013, with a population of 317 million, we were looking at 113 guns per 100 people, or 1.13 guns per person. And since gun sales have been increasing faster than the population, the divide has likely only widened in the intervening four years.

Ironically, gun sales boomed during the Obama era, as the gun debate was pushed to the forefront. In 2016, the National Shooting Sports Foundation (NSSF) published a report that said the gun industry had expanded by 158 percent during the eight years of President Obama's time in office. Some of this increase can be attributed to firearm-owning civilians boosting their arsenals, worried that they might soon lose the opportunity. But history has also shown that gun sales spike after a mass shooting, and tragedies like Sandy Hook, San Bernardino, and the Pulse Nightclub shooting fell within Obama's two terms, steadily driving gun ownership upward.

In fact, it was during his tenure that America first tipped into a country inhabited by more guns than people. By WaPo's Christopher Ingraham's math, 2009 brought us not only Obama's first year in office, but also an American population of 306.8 million and a firearm estimate at 310 million. And things didn't slow down — six years later, Black Friday 2015 was estimated as the biggest gun sales day in American history. Even now, in the wake of the deadliest massacre in our modern history, the gun lobby already appears to be benefiting.

The Guardian reports that less than 24 hours after the attack, stock prices were already on the rise at America's two largest gun companies. The country's largest manufacturer, Sturm Ruger, is up two points, or over four percent; at American Outdoor Brands, it's close to six percent, as some nervous Americans search for some sense of security.

But as history has shown, that security is hardly forthcoming. More guns don't lead to fewer gun deaths; in fact, the numbers seem to show just the opposite.

Correction: A previous version of this article included a mathematical error. It has since been updated.