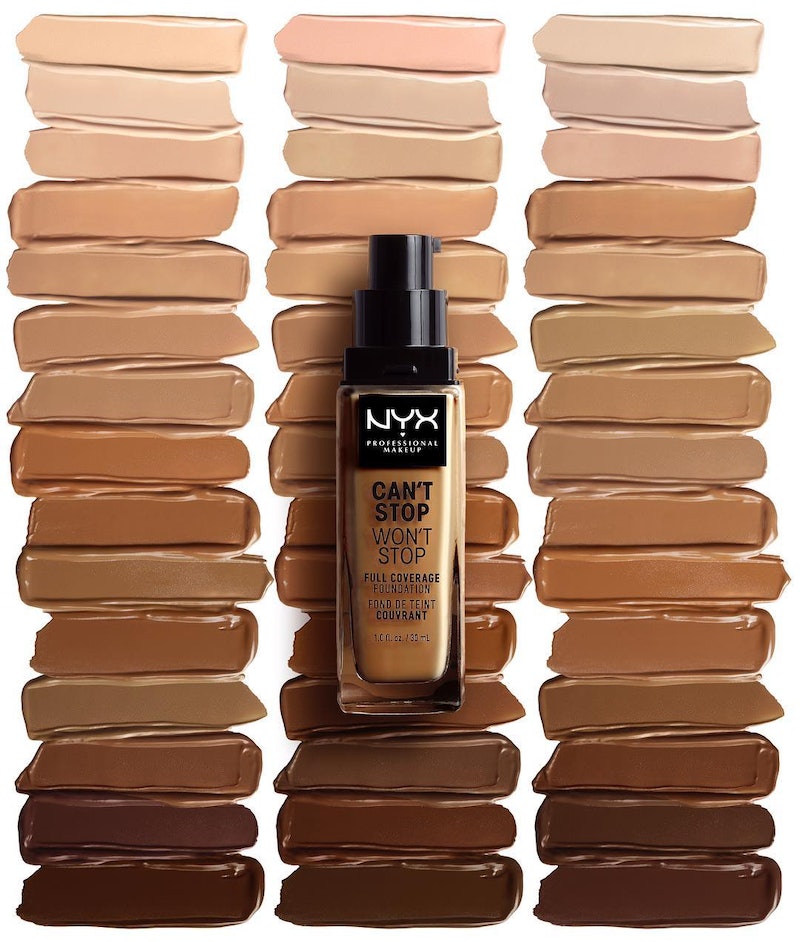 While calls for inclusivity have long been coming for beauty lovers of color, brands finally seem to be listening. Between Too Faced's work with Jackie Aina and drugstore brands like Maybelline expanding their shade ranges, things are looking up in the beauty world. Now, NYX Cosmetics Can't Stop Won't Stop foundation in collaboration with Alissa Ashley is adding another affordable and inclusive option to the growing number of brands who are hearing the call for diversity.

On Wednesday, both Ashley and the brand took to their social media accounts to announce both the new foundation and their collaboration. The Can't Stop, Won't Stop foundation is a full coverage, long wear formula, and according to the brand's post, it's also going to be incredibly affordable as well. It'll ring in at only $15, but honestly, its coverage, its wear time (a whopping 24 hours), and its price aren't even the best part.

The new NYX foundation will come in a huge 45 shade range. That's where Ashley comes in. The YouTube beauty guru has been a voice in the call for diverse shade ranges for quite some time now — you may remember her video with fellow guru Jackie Aina that focused on the Tarte Shape Tape Foundation's shade range. Now, she's helped developed these 45 shades, and it's a total win for drugstore foundation.

In her announcement post to her Instagram, Ashley described the opportunity as a full circle moment. Why? She's worked with the brand before as a foundation model. So cool, right? In her caption, she explains that she can't wait for her fans to try the new foundation in the expansive shade range. "I’m sooo unbelievably happy to announce that I’ve collaborated with NYX Cosmetics on their new Can’t Stop Won’t Stop Foundation which will be available in FORTY FIVE shades that I helped develop," she wrote, "To think that my first time ever working with NYX was as a model in a foundation campaign to now helping them with a foundation shade range which you guys know I’m so passionate about has me wanting to cry. Talk about full circle."

According to Allure, the foundation is set to launch online at NYX's website, in NYX stores, and at Ulta on Aug. 16, so while you do have a bit of a wait, it gives you plenty of time to contemplate your shade. In an interview with the magazine, Ashley explains that the shades and her help in developing them is all about the in-between hues. "We noticed that a lot of in-between shades were missing," she said, "Nyx already has an amazing shade range to begin with, but even though it was good, it could still be improved by adding some middle or in-between shades."

How do Ashley's fans feel about her work to expand the NYX shade range? Saying they're stoked is an understatement.

Fellow Youtuber and the mind behind the Too Faced Born This Way shade expansion Jackie Aina sent out her congratulations to Ashley.

Her fans, though, are extra lit about the collab.

They are ready for this new product to get here ASAP.

Because of Ashley's involvement, they know it'll be amazing.

The NYX x Alissa Ashley Can't Stop, Won't Stop foundation is hopefully a sign of more to come in the world of beauty. Finally, women of color's calls for inclusivity are being heard. If you want to support Ashley, mark your calendar for Aug. 16 because these 45 shades are coming your way.