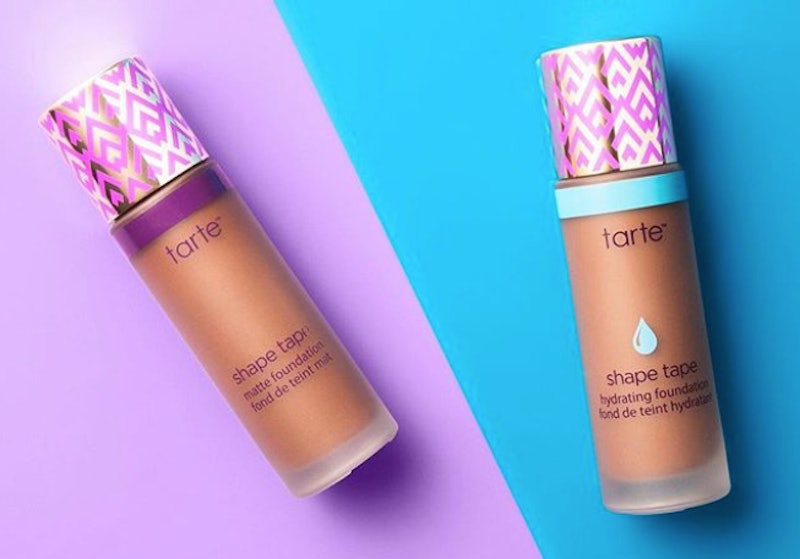 Considering Tarte's Shape Tape Contour Concealer became a cult-favorite product as soon as it hit shelves, the brand usually isn't one to disappoint. But Tarte's new foundation shade range of the same formulation has the internet — especially black beauty vloggers and makeup lovers — outraged by the lack of inclusion of POC-friendly shades.

When rumors circulated that the makers of a holy grail coverup would be making a base to match their high-in-demand concealer, beauty enthusiasts instantly clung to Tarte's social media for clues. "When does Tarte's Shape Tape Foundation come out?" was the question that plagued everyone's mind. So, to say that the hype around the foundation was real would be the ultimate understatement.

Once the shade range was finally revealed, however, that hype took a turn for the worse. With commendable shade ranges from recent launches like Fenty Beauty foundation and even Kylie Cosmetics concealer, there was an assumption that Tarte would have strived for inclusion, too. But a 15-shade foundation range, with three options suitable for tan to deep complexions, left a sour taste in the mouths of many Twitter users who were so not here for Tarte's new product.

Top social media influencers weren't impressed either, posting reviews that commented on Tarte for what they perceived to be a blatant disregard for the needs of people of color.

Alissa Ashley and Jackie Aina, two heavy hitters in the beauty vlogger sphere, took to YouTube to share their concerns with the foundation. As if the lack of shades wasn't enough, Ashley and Aina believed the brand added insult to injury by formulating the deeper colors with an orange undertone that wouldn't suit melanin-rich skin.

Both vloggers get even more outraged as they read the shade names out loud. They name one "fair" and "light" shade after another, saying that Tarte didn't do people of color any justice. They believe that the first 12 shades of the foundation basically look like the same beige hue is inexcusable for any foundation, let alone one that so many had been looking forward to trying.

"I don't appreciate the blatant erasure of a whole spectrum of people," said Aina 14 minutes into the video, voicing the frustrations being expressed by people of color across social media.

Attempting to explain where Tarte may have gone wrong, MakeupShayla mentions in the video above that many brands will launch a foundation and later fill in the gaps to extend the shade range. Reading comments from a Tarte rep in an interview with PopSugar, she adds that brands include more shades seasonally to accommodate complexions being paler in the winter and darker in the summer.

"I would like Tarte to know my skin tone isn't seasonal," said Shayla immediately following the reading. Update: PopSugar has updated their article to clarify that this was the opinion of the author, not a quote from a Tarte rep.

As revealed exclusively by PopSugar, 10 more shades are indeed in the works, but many fans don't believe this makes up for the original launch. For many, it's a matter of putting people of color last that makes news of additional shades disappointing.

If the extended shade range doesn't include majority deeper hues, the brand will likely receive a ton of backlash from the Twitterverse.

For many, additional shades are pointless when there's still improvement needed on the current deeper foundations that are far to orange in undertone for many people of color to use.

Whether it was the intention or not, it seems to many as though the brand prioritized lighter skin by releasing "50 shades of beige" during their initial launch.

Whether it eases tensions with the brand or not, a released statement from the Tarte via Instagram offered an apology:

"We wanted to get the product out as fast as possible, and we made the decision to move forward before all the shades were ready to go. We know there is no excuse & we take full responsibility for launching this way. We lost sight of what's really important in this industry, & for those who feel alienated in our community, we want to personally apologize. We're doing everything in our power to bring those unfinished shades as fast as we can, at any cost. WE CAN AND WILL DO BETTER.

This apology may not be enough to make up for what the brand has suggested to the beauty community — the sentiment that darker skin is an afterthought. Even if the 10 shades to come fill in the tan, dark, and deep gaps present in the foundation range, black beauty bloggers and those initially excluded from the product may not give it a second chance.

When Tarte, a mainstream brand, made having options for darker skin feel like privilege rather than a priority, it only makes sense that people of color are completely turned off by the Shape Tape Foundation altogether.