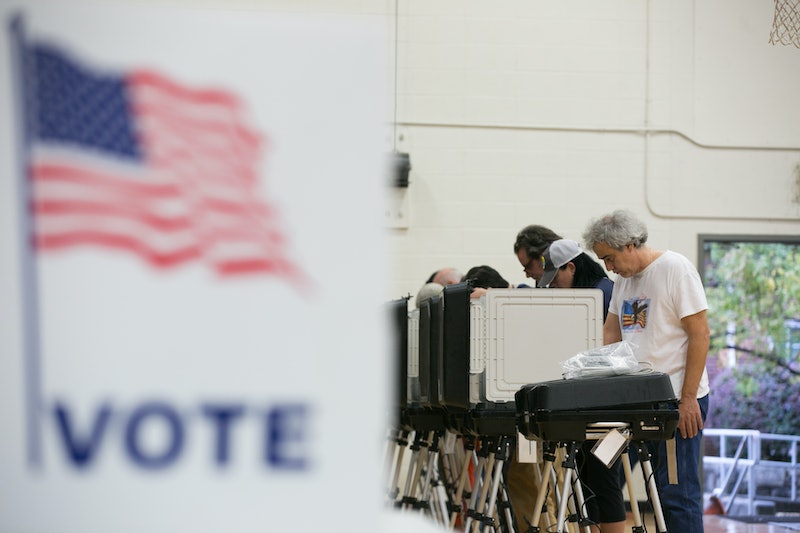 Georgia's elections Tuesday night were among the most watched in the country, and — despite reports of voter suppression — received record turnout numbers. According to recent reports, just how many people voted in Georgia's 2018 midterms surpasses 3 million by a long-shot.

According to The Atlanta Journal-Constitution, of Georgia's 6.4 million registered voters, 3.9 million people voted. In fact, with 100 percent of precincts reporting, The New York Times counted 3,920,577 votes in the gubernatorial election between Republican Brian Kemp and Democrat Stacey Abrams. It's unclear whether that number is only in-person votes, or whether it also contains some absentee and mail-in ballots.

A spokeswoman from Kemp's secretary of state office told the Associated Press that there are still some 22,000 provisional ballots left to be counted. The number of mail-in ballots is unknown as of yet, since voters had until yesterday to make sure they were received, but the Abrams campaign said Kemp's office told them they are waiting on 3,000 mail-in or absentee ballots to be counted, according to Huffington Post.

At 50.3 percent of the vote, Kemp's campaign went ahead and declared victory on Wednesday, but Abrams' team is not giving up until every vote is counted, hoping for a run-off. "The sitting secretary of state has declared himself" the winner, Abrams’ campaign manager Lauren Groh-Wargo told AP. "We don’t accept or reject what he said. He needs to show proof."

A spokesperson for the Kemp campaign rejected the idea that there was any uncertainty in the gubernatorial results. "Abrams does not have a mathematical formula to victory, based on our calculations," Cody Hall told The Washington Post. "We have a clear path to victory. We’re declaring victory and we are moving forward with the transition process starting tomorrow."

As polling went on Tuesday, voters across the state faced numerous hurdles in their attempts to cast ballots, from faulty voting machines and long lines due to an insufficient number of machines, to a shortage of provisional ballots. On Twitter, frustrated voters posted videos describing voting machines missing power cords, and complained about inexplicably closed polling places.

A Superior Court judge in Fulton County, and another court in Gwinnett County even stepped in to order that polling places stay open until as late as 10 p.m. to give voters the opportunity to have their voices heard.

According to The Post, many Georgia absentee ballot requests — a large percentage of which came from minority voters — were never answered, meaning some voters never got the chance to vote at all. "From our vantage point, this was an intentional system failure in targeting communities where African Americans made up a high percentage of active voters," NAACP President Derrick Johnson told the paper.

But despite the fact that Kemp's campaign called the race already, his office told The Post that votes will continue to be counted into next week, and Abrams hasn't conceded.

"We believe our chance for a stronger Georgia is just within reach," Abrams, said in a speech early Wednesday morning. "We cannot seize it, however, until all voices are heard. And we are going to make sure that every vote is counted — because in a civilized nation, the machinery of democracy should work everywhere for everyone."