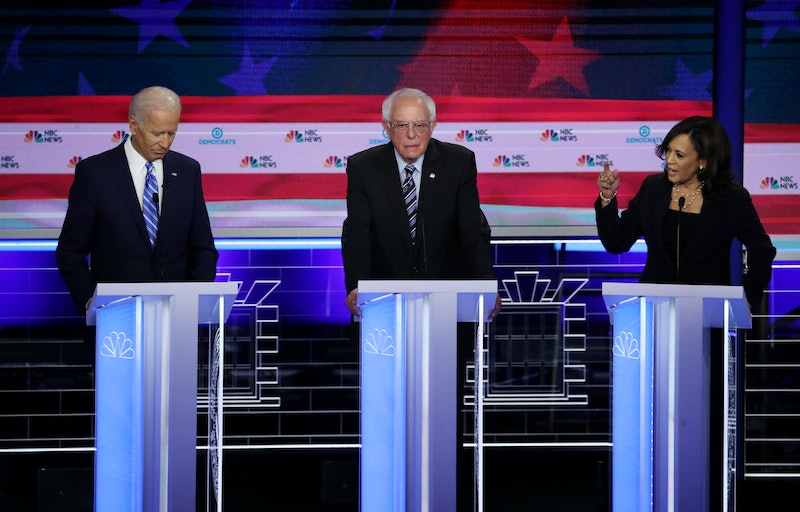 Thursday night marked the second of two Democratic debates hosted by NBC News, and it was filled with heated discussions of immigration, police brutality, the economy, and racial justice. But just how many people watched the Democratic debate on Thursday? According to figures from a data analytics company called Nielsen, night two of the debates broke records.

Preliminary data from Nielsen indicates that 18.1 million people watched the second round of the debate across NBC, MSNBC, and Telemundo, The Los Angeles Times reported, making it the most-watched Democratic debate in television history — and even more people tuned in to online livestreams. The previous viewership record for a Democratic debate took place in October 2015, when five Democratic candidates faced off as 15.4 million people watched. On Thursday night, there were twice as many candidates, and more viewers than ever before.

Thursday night's viewership data also illustrated a 15-20% increase from Wednesday night's Democratic debate, which had approximately 15.3 million viewers. According to The Washington Post, the high Nielsen ratings that the NBC debates achieved are critical to network success, because better ratings can bring in additional advertising revenue. In the case of a debate, meanwhile, these ratings can convince a major political organization like the Democratic National Committee to continue partnering with the network, per The Washington Post.

Although Thursday night's debate broke records for the Democrats in terms of viewership, its Nielsen ratings were still lower than those achieved by the first two debates in which Donald Trump participated in 2015. According to CNN, an August 2015 Republican debate on Fox News drew 24 million viewers, while 23 million people tuned into a subsequent Republican debate on CNN.

But this week's Democratic debates nonetheless illustrate an early interest in the 2020 presidential election, per CNN. Thursday night's debate has gotten significant amounts of attention, particularly due to a face-off between California Sen. Kamala Harris and former Vice President Joe Biden. In a heated exchange, Harris confronted Biden on his policy record, and asked him why he would oppose busing policies that directly benefited black students like her.

Both of this week's Democratic debates saw their fair share of memorable — and at times, intense — moments and exchanges. On Wednesday, former Texas Rep. Beto O'Rourke and New Jersey Sen. Cory Booker tried to show off their Spanish-speaking skills, while former Housing and Urban Development Secretary Julián Castro won widespread praise for his responses to questions about immigration, abortion, and equal pay. The very next day, all 10 candidates onstage raised their hands when asked if their health care plans would include coverage for undocumented immigrants, and Harris, Biden, South Bend Mayor Pete Buttigieg, and California Rep. Eric Swalwell had a candid discussion about racism and police brutality.

The field of candidates running for president is already quite crowded, with at least two dozen Democrats competing to make sure that Trump is a one-term president. For candidates who are lesser-known and who have been trailing in the polls — like author Marianne Williamson and former tech executive Andrew Yang — these debates are a chance to pitch their policy proposals to a wider audience, while front-runners like Biden, Vermont Sen. Bernie Sanders, and Massachusetts Sen. Elizabeth Warren must hold their own. After all, the record-breaking viewership of this week's Democratic debates is proof that voters are paying close attention to what the candidates have to say.