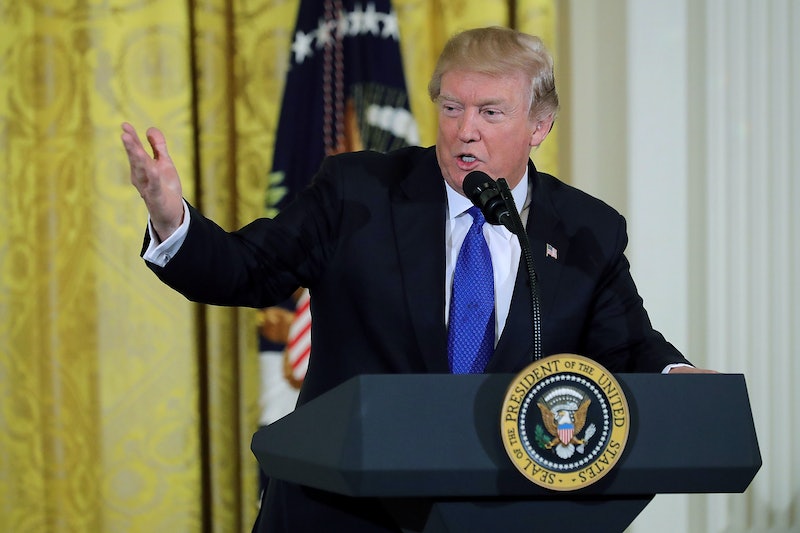 Even if you're not big into social media, you probably know that President Donald Trump spends a lot of time on Twitter. And if you've ever wondered how many times Trump tweeted during his first year as president, the actual number might startle you.

Twitter was one of the preferred ways Trump communicated with the public as a candidate, and that hasn't changed since he entered the White House last year. And presidential tweets, needless to say, are a lot more important than candidate tweets of reality TV host tweets.

Trump has started, stopped, and distracted from entire news cycles on the basis of his tweets, and it's almost impossible to rank them on the basis of newsworthiness. Simply put, there's never been an American president who's pumped out so many of his unfiltered thoughts into the public discourse as Trump has, and the method he uses to do so is his Twitter app.

As for how many times he's actually tweeted throughout his first year in office ― that's Jan. 20, 2017 to Jan. 20, 2018, to be clear ― that's pretty easy to figure out, thanks to the hyper-searchable Trump Twitter Archive.

So, what's the raw number? You might want to prepare yourself. From the morning of his inauguration through its one-year anniversary, Trump has sent out a whopping 2,568 tweets. That amounts to just a bit more than seven tweets per day.

Obviously, this tweet was sent hours prior to Trump's swearing-in, so he wasn't actually president yet. Given that he did post it on the very same morning, however, teasing his imminent swearing-in with a rather decisive tone, it's being included in this count. The count also include retweets, something Trump does quite often, especially from his children's accounts.

The last tweet on the list, sent out at 9:34 p.m. ET, was a line from his son, Eric Trump, albeit by way of the Fox News Twitter account. Trump retweeted the following quote, praising him for "putting America first."

Trump spent more time tweeting as his first year wore on. As Mashable noted on July 20, 2017, he was sitting at just 1,002, meaning he really picked up the pace in the closing months of the year. It's worth noting, however, that the tweets on his account almost certainly aren't all his; social media manager Dan Scavino appears to also have access to the account. Furthermore, some observers have noted different details and styles that seem to give away when the real commander-in-chief is writing the tweets.

The last tweet Trump actually sent from his account on the one-year anniversary of his presidency, in case you're curious, was a plug for Eric's appearance on Fox News' Justice with Judge Jeanine, starring former prosecutor and conservative Jeanine Pirro. Trump has frequently tweeted praise for Pirro, and encouraged people to watch her show throughout his first year.

It remains to be seen just how many tweets Trump will have sent out by the time his presidency comes to an end. Assuming he kept the same sort of pace his did throughout his first year ― posting about 2,568 tweets every year for three years, until Jan. 20, 2021 ― he'd be looking at approximately 10,272 tweets.

If he managed to win re-election and serve a second term, that number would swell to more than 20,000 ― although that also assumes Trump would be as active a tweeter at 78 as he was at 71, and there's no telling whether that's likely to be true.