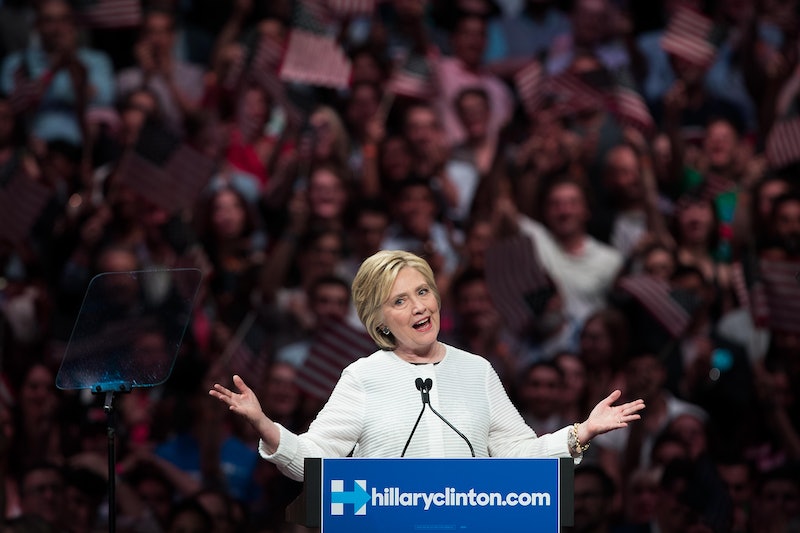 When Hillary Clinton won the Democratic nomination in 2016, she made history as the first woman to ever be nominated for president by a major political party in the United States. But she wasn't the first to try. Those who came before her were often ridiculed and rarely taken seriously — but exactly how many women presidential candidate there have been over the years might surprise you.

No less than 31 women have received party nominations in their bids to become president, according to a report by The Guardian. Their campaigns date back to 1872 — before women got the right to vote —when Victoria Woodhull ran for president under the Equal Rights Party. (The party chose Frederick Douglass as her running mate, but according to Politico, he never actually participated in Woodhull's campaign, and actively spoke in favor for Ulysses S. Grant, the incumbent.)

A few years later, there was Belva Ann Bennett Lockwood, who ran in 1884 and 1888, per the Center for American Women in Politics (CAWP). Lockwood also ran under the Equal Rights Party, but while she didn't make it very far, either, she did leave another legacy behind. Per CAWP, she drafted the legislation that allowed women lawyers to practice law before the Supreme Court — and then became the first woman to ever do just that.

After Lockwood and Woodhull, a woman wouldn't go on to appear as a viable candidate until 1964, when Margaret Chase Smith took on Barry Goldwater for the Republican presidential nomination. ("I have few illusions and no money, but I'm staying for the finish," she said at the time, according to the House archives. "When people keep telling you, you can't do a thing, you kind of like to try.") While Chase also lost her bid for the nomination and the presidency, like Lockwood, she still made history. Per the archives, Chase was the first woman to be elected to both the House and the Senate.

Another first took place in 1972, when Shirley Chisholm became the first Black woman to vie for a major political party's presidential nomination. Although she only received 151.95 electoral votes at the Democratic National Convention, per CAWP, she made history all the same. She was also the first Black woman to serve in Congress, where, per The New York Times, she represented Bedford-Stuyvesant.

Women's campaigns for the U.S. presidency picked up speed after Chisholm. There was Ellen McCormack, who in 1976 became the first woman to receive federal federal funds for a presidential campaign, per the National Constitution Center. She made it on the primary ballot in 20 different states, per the center, running on an anti-abortion platform. McCormack ultimately lost.

Qualifying for federal funds is no small feat. A few years later, in 1988, Patricia Schroeder geared up to make a serious bid for the presidency, only to drop out after not raising enough money, per CAWP.

Several other women vied for a major party endorsement after Schroeder, leading up to some of the recent women presidential candidates, including RepublicansMichele Bachmann and Carly Fiorina, Jill Stein of the Green Party, and, of course, Clinton.

Although the momentum has been slow to build, it's been building all the same. And given the number of women running for president in 2020 — at least six, so far: Kamala Harris, Elizabeth Warren, Kirsten Gillibrand, Amy Klobuchar, Tulsi Gabbard, and Marianne Williamson — it's definitely possible that a woman could make it to the White House sooner, rather than later.