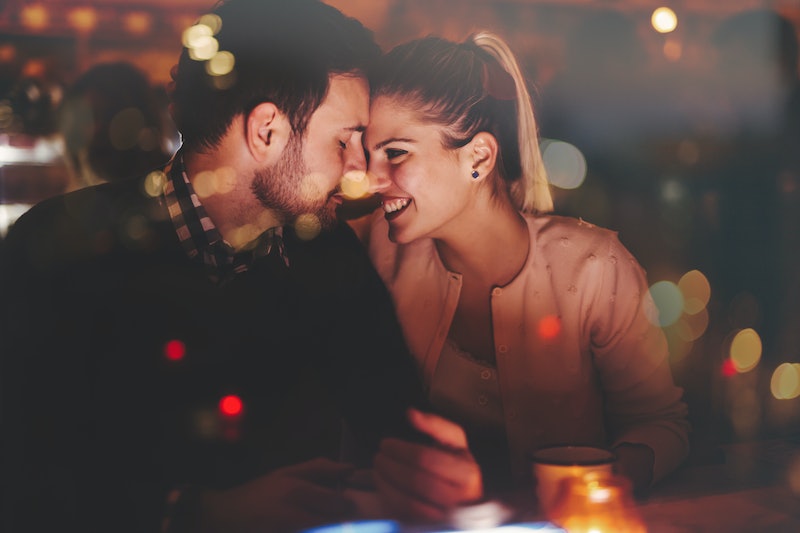 Mercury has officially slipped into its last retrograde of the year, and it's going to low-key complicate things on major and minor scales for us all until Nov. 20 — NBD. Just as we were all settled in for a cozy cuffing season, the extra planetary motion has made things a bit more complicated than anyone has the energy to deal with, but the ways in which this event will complicate things isn't necessarily intuitive. Aka, it doesn't mean that because Mercury retrograde is happening during peak cuffing season we're all destined to uncouple or go into the holidays without any cuff luck, if that's what you're after.

Bustle talked to astrologer Kyle Thomas about how Mercury's retrograde will directly affect our cuffing game, because the rest of the internet will be quick to tell you that this retrograde is going to ruin our love lives, but the reality is that Mercury's wrath is not that ruthless, and most importantly, not that powerful. And according to Thomas, this retrograde doesn't threaten to uncouple us as much as it threatens to send us into the past, if anything. "Retrograde in Scorpio is all about intimacy and reevaluating our needs in love, sex, and union. Scorpio is an energy that wants to go deep and doesn’t enjoy superficial relationships or connections. This is an all or nothing energy," Thomas tells Bustle.

So on one level, we'll be analyzing what we have, thinking more deeply about what we want and how what we have measures up. While this thought process could theoretically lead to break ups, or "aha!" moments, that's not a negative thing. It's actually Mercury's retrograde forcing you to take pause and pay close attention to how you already feel and take action. OK, but why are we slipping into the past and opening the ex files? Thomas tells Bustle that quite literally, this is the “season of the ex.”

So, if there's someone you're still carrying a torch for from the past, "this is the perfect time to see if the energy still exists between you — in love or friendship," Thomas says. While there's often a lot of negativity around opening closed doors, Thomas reminds us that "all relationships need to evolve and sometimes timing can be off. If that was the case, the timing could now align," so if your gut tells you there's something to explore in one of your ex files, go for it. Just manage your expectations and remember that your ex might not be having the same "aha!" moment that you are having — and that's OK. We don't all respond to the retrograde energy the same.

On a more spiritual level, Thomas tells Bustle that "all retrogrades create a déjà vu phenomenon for us, and they also stir up very powerful karmic connections. That’s why sometimes we cross paths with a soulmate — or realize someone from our past was a soulmate all along." So whether that pertains to you reconnecting with an ex for that reason, or someone from a past life, if you believe in that concept, you might find that you're actually being confronted with love opportunities left and right, not counting your losses as Mercury retrograde's reputation might have you believing. So be open to learning new things about people who had your heart in the past, and prepare yourself for new feelings regarding people who have your heart now.