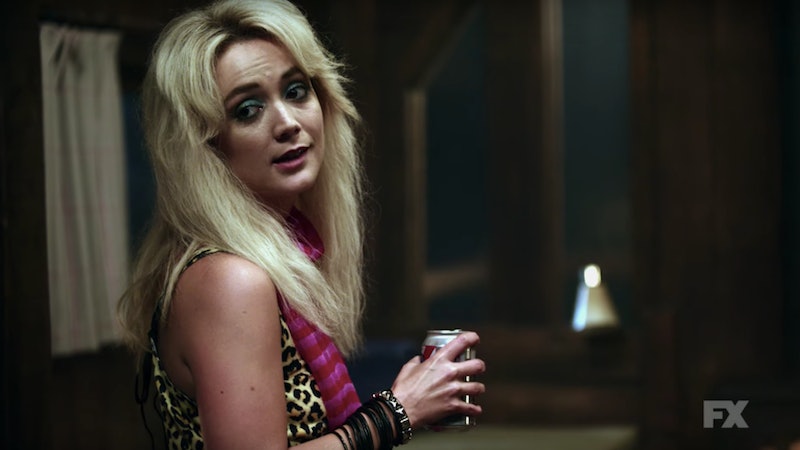 Spoilers ahead for Episode 2 of American Horror Story: 1984. The plot of any good slasher movie is high-stakes — sometimes so much so that those stakes go on to impale several different people. Such was the case in the Oct. 2 episode of American Horror Story: 1984, aptly titled "Slashdance." However, bloodshed wasn't the only thing that dominated the hour — plenty of secrets came to light as well, including the fact that Montana and the Night Stalker know each other and have been working together to bring Brooke down this whole time.

After Ray left her to fend for herself with the Night Stalker, it initially seemed like Montana was about to meet a violent end. But rather than attacking Montana, the Night Stalker started passionately making out with her. She then pulled away to slap him and say, "Why haven't you killed her yet?!" The episode ended there, so we don't actually know which "her" Montana was referring to, but it seems most likely that she was talking about Brooke. She's been the Night Stalker's target from the beginning, when he broke into her apartment, and now it's clear how he figured out where she was so soon afterward. Satan didn't send the Night Stalker to Camp Redwood — Montana did.

How or why Montana and the Night Stalker teamed up to take down Brooke, we don't yet know. Given their recent encounter, they appear to be in some sort of romantic (and slightly violent) relationship, but any clues about their backstory are scarce. The promo for next week's episode hints that the Night Stalker met Montana at one of her aerobics classes. (In it, she calls him Rambo and says the class isn't for posers.) It'll be interesting to see how that encounter evolved into a murder scheme.

Perhaps the most important question to come out of the episode, though, is why Montana wants Brooke dead. Brooke didn't know Montana before they decided to work at Camp Redwood together, so why would a complete stranger want to kill her? One Twitter user suggested a theory that Montana was either related to or in love with the best man at Brooke's wedding — you know, the wedding that turned into a total bloodbath. As we saw in a flashback, Brooke's fiancé accused her of sleeping with his best man the night before their wedding. She denied it, assuring him they were just friends, but he shot the guy in cold blood right then and there. If Montana did care for this man in some way, it's possible she blames Brooke for his death and wants revenge.

Of course, with such little evidence, this is just a loose theory at this point, but clearly there's more to the story than what we've seen. And in the end, Montana's motivations for wanting Brooke dead may not even matter — she's been drugged and abducted by Fake Nurse Rita, and who knows what she and Mr. Jingles have planned.