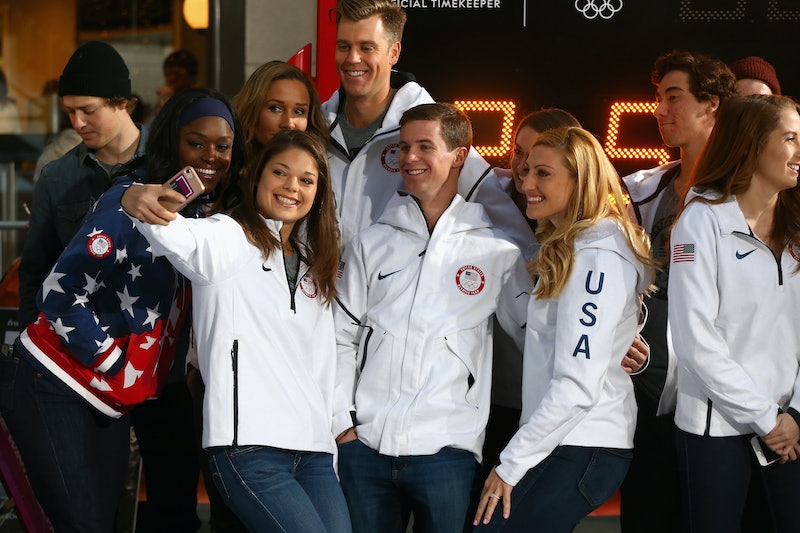 The Olympics are almost here, so you know what that means — cold weather outfit inspiration is, too. Top designers have created some incredible uniforms for Team USA so far and Nike's contribution is no different. A similar replica of Team USA's medal stand white jackets are available online, so you can have a little piece of history to get you through the rest of the season. And, you know, keep you warm.

The uniforms for the 2018 Pyeongchang Olympics are incredible to say the least. On top of the Ralph Lauren opening ceremony jackets that are heated and the space-themed snowboarding suits, there's a whole lot to take in. But Nike's might just be the most practical of them all. As Team USA hits the medal stand, they'll be wearing bright white jackets with their team name down the arm.

The jackets are sleek and minimal while being extremely nostalgic at the same time. If the red, white, and blue color wasn't already enough, there's also an Olympic patch on the chest, an American flag on one arm, and USA on the other.

Compared to the Ralph Lauren Opening Ceremony uniforms, these are extremely simple, but that's what makes them so great. Because when the athletes hit the medal stand, it will be all eyes on them — not their outfit.

While you can't buy the exact replica of the outfit, you can buy the pieces that are pretty darn close. Nike came up with a half zip that looks almost identical to the medal stand outfits. The pattern and the colors are exactly the same. The only difference is that the design is even more wearable.

Instead of having to keep you warm, the ones on the Team USA Shop website are more for show. Considering that the athletes will be taking a part in what is rumored to be the coldest Olympics ever, according to Time Magazine, they will need all the help that they can get. You, however, will probably not.

Everyone will know what team you're cheering when they see you in this sporty design, despite the fact that it's mainly white. This team spirit will cost you though. The jacket is a cool $180 on the Team USA Shop website, and, like all the best pieces of clothing, are limited edition. The only downfall is that it comes in sizes small to XL, making the sizing limited.

You might not be able to get it in time for the Opening Ceremony, but it can be yours between one to four business day, which means that you can have it for Closing Ceremony, if you plan it right.

That's not the only item that you can snag from the shop, either. There are 294 styles available in the team shop. You can grab classic Team USA gear and even some for specific sports as well. There's a sweatshirt for you to rep your favorite sport like curling, hockey, and bobsled and skeleton.

None of the items are currently sold out, but some do say limited quantity by them. Like I said, all of the Olympic apparel is limited edition, so you'll want to stock up on them while you still can. You won't have another chance to score them until four years from now.

The best part of the Team USA Shop is that it takes all the different designs and puts them in one place. Not all of the sweatshirts and zip-ups were designed by Nike, but they are all extremely wearable. You'll be able to watch your team of choice and then go shop what you wear. If that's not the coolest fashion show every, then I don't know what is.