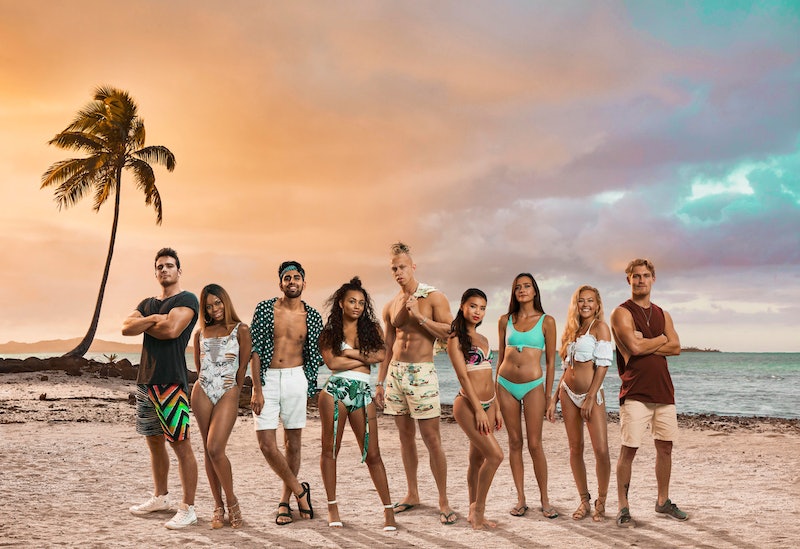 The 2019 series of Shipwrecked has introduced a whole new generation to this legendary reality series. The current season follows the classic "battle of the islands" format, in which two competing tribes — known as Team Tiger and Team Shark — battle it out to attract as many new arrivals to their island as possible. But how much are the Shipwrecked contestants paid?

Bustle reached out for comment about the financial arrangement, and will update this post if we hear a response. However, according to Chronicle Live, the official Channel 4 website where potential castaways were invited to apply previously stated that contestants would take part in the series for free, though they do have a chance at a stake in the £50,000 prize money. The now deleted application page for Shipwrecked 2019 stated that potential islanders must be aged between 18 and 30, and provide the casting team with pictures and an audition video. The casting post on the Channel 4 site reportedly read "Are you aged 18 or over? Ever dreamed of living on a stunning paradise island? Fancy doing it (for free) THIS summer?! We’re looking for people who are totally EXTRA, have strong opinions, and the ability to hold their own during the experience of a LIFETIME." The post then concluded "You’ll make friends, memories, and possibly a bucket load of cash… All while you tan to perfection! It’s a competition, and the competition is fierce — so get in touch ASAP."

If the stars of Shipwrecked do indeed take part in the series for free, then contestants face the real possibility of walking away empty handed after weeks of fierce competition. However, the winning tribe will be rewarded greatly for their efforts, and as previously reported by Bustle, will walk away with a hefty £50,000 prize. In order to bag the all important cash at the end of their stint in paradise, the two tribes must compete to win over the new arrivals, who gradually arrive throughout the season. At the end of the series, the team with the most islanders will be named Shipwrecked champions.

In a recent episode, viewers were left heartbroken when new arrival, Josh Christie, was forced to leave the island early due to a family emergency. According to the Daily Star, Christie previously arrived on Tiger Island after beating fellow newbie, Casey, to secure a permanent spot on the show. But despite his victory, the Shipwrecked star decided to bow out of the competition — and twitter was very upset about it.

When informing his fellow islanders of his decision to leave, Christie said "I’ve been in touch with family back home, I’ve been notified that I have a family emergency so this has caused me to leave with immediate effect from this competition," and when speaking of his short but sweet experience, he added "I’m actually so happy for the time I’ve been given. I think I’ve met a real good bunch of people."

Upon his departure, new islander Troy, who was just about to be sent packing after losing a challenge, bagged the empty spot on Tiger Island. You can follow the latest Shipwrecked drama every week night on E4 at 9 p.m.