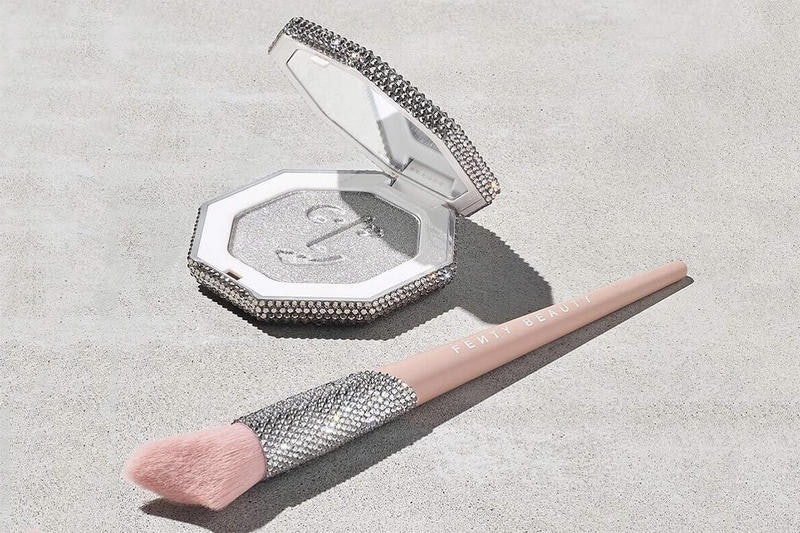 Fenty Beauty is about to step up your makeup vanity with a major dose of bling, where a new limited-edition Fenty Beauty Killawatt Highlighter is covered in Swarovski crystals, bringing an extra injection of sparkle to your highlighter. For those who know their Fenty Beauty products, they might notice that the silver highlighter isn't new. Rihanna created the chrome “Diamond Ball-Out” Killawatt highlighter in July 2018 to celebrate her annual Diamond Ball event that helps raise funds for her charity, the Clara Lionel Foundation, a non-profit foundation that was founded in honor of the artist's grandparents, Clara and Lionel Braithwaite.

With the original Diamond Ball-Out highlighet, 100 percent of the proceeds went directly to CLF, which aids impoverished communities across the world and provides them with education, emergency responses, and healthcare. The Foundation's mission statement is, "We believe in the right to education as a weapon against injustice and inequality, and the right to health as a necessity for happiness and productivity."

Now the limited-edition illuminator is back, and even more glitzier than the original, just in time for the sequin-heavy, glitter-bombed holiday season. The Swarovski crystals stud both the highlighter compact and Cheek-Hugging Highlight Brush 120, and 100 percent of the proceeds will go to CLF once again.

Which means that with this purchase, you won't only be adding a dose of sparkle to your makeup bag, but you will also be helping an important cause. "This very special Killawatt takes highlight to a whole other level. It will have you glowin like never before because whenever you wear it, you're supporting children and other people in need all around the world," Rihanna shared in a release of the original Diamond Ball-Out highlighter. It still rings true for the 2.0 crystal version. Plus, Rihanna custom-selected the Swarovski gunmetal crystals herself, which were then each expertly applied by hand to the compacts and brushes.

The only downside is that only 10 of these crystal studded, chrome highlighters have been created, and they are already sold out. You were able to nab your purchase directly on the Fenty Beauty site, and you would have had to drop $350 to make the metallic illuminator yours. But 10 lucky beauty fans have already beat us to it.

Do you love the luxuriousness of the highlighter and believe in the cause, but were hesitant about the purchase because you weren't sure if you could pull off a heavy dose of silver on your cheekbones? While it's an intense shade, the Diamond Ball-Out highlighter doesn't have to be exclusively worn on the traditional highlighting points of cheekbones and nose bridges. You can also use it as a silver eyeshadow, dab it in the corners of your eyes to make your eyes pop, layer it over lipstick to give your mouth a metallic touch, or use it across your lash line like a metallic eyeliner. So the next time there is a silver highlighter available, you will know all the ways you can play with it.

And seeing how December and January calls for all things metallic, a silver highlighter would have come in handy for this upcoming festive season. Here's to hoping Rihanna does a round three with the chrome highlighter in the near future!