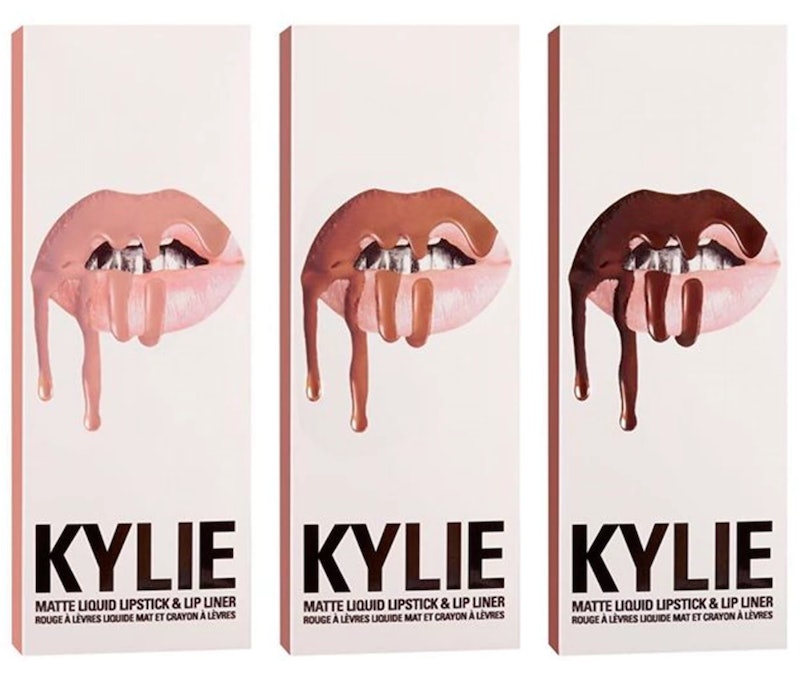 It's fairly obvious that Kylie Cosmetics is massively successful. From its debut drop of three $29 Lip Kits, oft-crashing site, continuously sold out product, at times frustrated customers, frenzied restocks, and ultimate development into an online cosmetics behemoth with a smooth operation, it's been a learning and growing process.

So how much money has the Kylie Cosmetics empire earned since launching back in November 2015? According to a Women's Wear Daily report, Kylie Cosmetics has raked in $420 million in retail receipts in just 18 months. Whoa. Nearly $500 million? Talk about a growth spurt. That type of rapid expansion is relatively unprecedented in the makeup industry, and Kylie Cosmetics is on track to see a 25 percent increase this year alone.

The brand is also on track to reach a billion dollars in sales — making it a true beauty biz unicorn — by 2022. To provide a little perspective, L'Oreal-owned brand Lancome hit the billion dollar mark in 2015, after 80 years in existence, according to WWD.

Bustle reached out to Kylie Cosmetics' PR team regarding the authenticity of these sales numbers.

The publication reports that Jenner's momager Kris Jenner confirmed the sales stats during a recent interview in her Los Angeles office. WWD claims this is the first time that Kylie Cosmetics sales have been revealed beyond speculation and that documentation was provided to back those figures.

WWD also reports that estimates from beauty and tech experts regarding Kylie Cosmetics' worth have run from as low (!!!) as $50 million to as high as $300 million. Jenner has sprinted well beyond those approximations, making them seem like chump change.

Now it's an empire with a wide variety of shades, textures, and formulas, as well as other-than-lip products.

Let's put the rapid growth of Kylie Cosmetics into perspective. WWD notes that Tom Ford Beauty, which is owned by Estee Lauder, hit $500 million in revenues ... in a decade. Kylie Cosmetics is approaching that sales high watermark in less than two years. So, yeah, the growth is astronomical.

Granted, Tom Ford Beauty is super prestige, selling $60 lipsticks and appealing to a more affluent customer, whereas Kylie Lip Kits appear to speak to a millennial, online-savvy customer with an iPhone glued to their hand.

It was widely reported that Jenner's big sis Kim Kardashian, who obviously studied Kylie's business model when launching her own KKW Beauty, made $14 million in mere minutes during her launch.

Clearly, the Kardashianners know what they are doing in the beauty space.