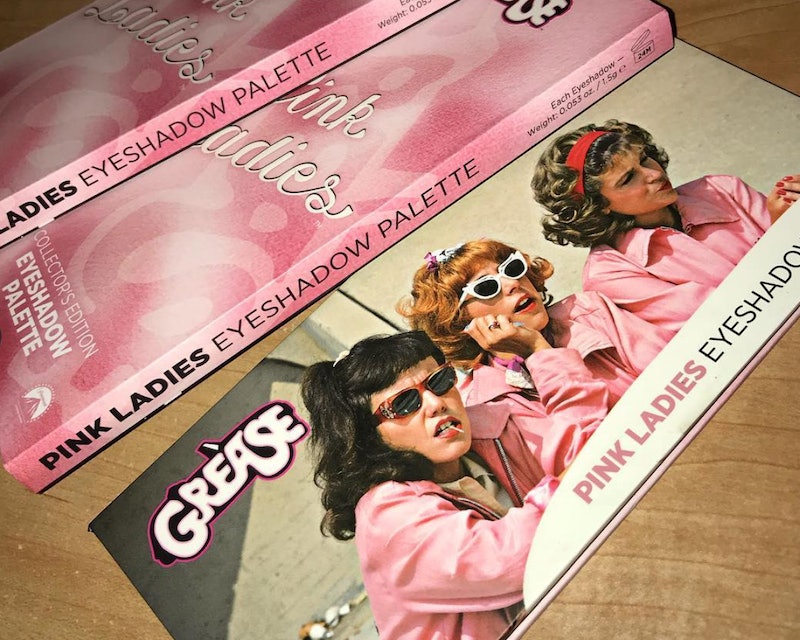 The Pink Ladies are finally getting their due. Indie makuep brand Sola Look is dropping a Grease eyeshadow palette inspired by the iconic, pink jacket-wearing clique from the film. Rizzo, Frenchy, Marty, Jan — the gang's all here and well-represented by this palette. The palette is available for pre-order as of Saturday, June 16, which is an important date in the film's history. It's the 40th anniversary of its arrival in theaters!

Bustle got the scoop directly from Sola Look regarding the price and what's under the hood of the palette. There are 10 cruelty-free eyeshadows inside and it boasts a $40 price tag. That shakes out to about $4 per hue. You can't beat that.

Sola Look hasn't shared any swatches nor has it revealed the names of the eyeshadows as of press time. But the brand certainly has our rapt attention. There's just no way a palette inspired by the Pink Ladies and the enduring pop culture touchstone that is Grease won't be good!

While upon first look the packaging appears to be millennial pink, it's really a nod to the Ladies and their fave accessory. The images from the film, which was set in the late '50s and released in 1978, show off the flushed cheeks, red lips, darkly rimmed eyes, and the beauty aesthetics of the era.

The book-like packaging will certainly prettify your vanity or wherever you choose to store or display it. Waking and making up with the Pink Ladies sounds like a "do" to us.

All of your other makeup palettes are going to be bummed out once you get your hands on the Sola Look x Grease Pink Ladies palette. You will be hopelessly devoted — natch!— to this palette. We can say that, sight unseen, since we've used and loved the brand's other film-inspired palettes — namely the Flashdance and Dirty Dancing collections.

As if 10 eyeshadows wasn't enough to reel you in regarding this palette! Sola Look is including this Rizzo sticker with each purchase. OMG, right? You can totally slap it on your laptop, the back bumper of your car, or on the cover of your journal. You cannot deny that Rizzo had such style — from her cropped 'do to those killer shades. That's to say nothing of her sassy, strong personality and 'tood!

ICYMI — here are the swatches from the Dirty Dancing palette. It included eyeshadow, a highlighter, and a matte liquid lippie that smelled like a freshly baked vanilla cupcake. The colors were oh-so-'80s, which made sense since that's when the film was released.

The Flashdance palette featured recognizable imagery from the film. While there were only four pans of matte eyeshadow named after characters and concepts related to the film, they were complimentary, easy to blend, and extra large.

Sola Look shifted gears away from palettes in favor of a liquid lipstick trio for its most recent pop culture collab. The brand issued three metallic lippies inspired by Saved by the Bell's main female characters earlier this year.

Sola Look has clearly found its niche with makeup ranges that take inspo from beloved films or TV shows. While the brand has definitely demonstrated a keen understanding of the '80s and '90s, the Grease x Pink Ladies palette is new and multi-generational territory.

We hope the brand reveals the swatches sooner than later. We can't help but wonder if Sandy will somehow be incorporated into the palette or if one of the shades will be christened after her.

You can follow Sola Look's social feeds for more intel on the PLP. Or you can head over to the website and sign up for email notifications. That way, you'll remain in the know and be well-informed.

Remember: You're never too pure to be pink.

And now they have their own palette.