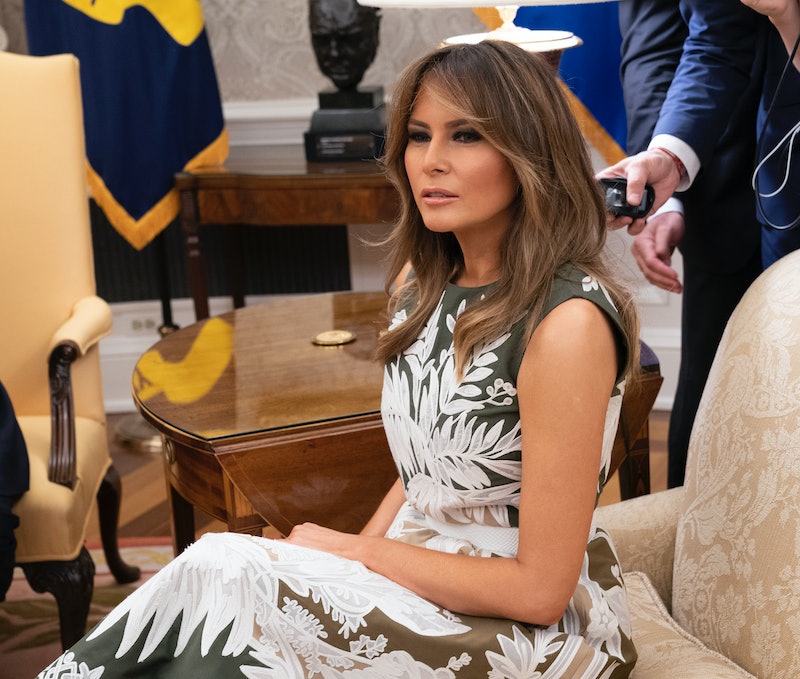 This member of the White House team has yet to be kicked of a restaurant. But the press secretary and communications director for the First Lady of the United States definitely sees her name in print often, given Melania Trump's hesitation to give interviews or go on Twitter rampages like her husband. It's definitely a busy job — especially given recent controversies. How much that's worth to the White House is reflected in how much Melania's spokeswoman Stephanie Grisham makes.

According to the latest numbers from the White House, which was released on Friday, June 29, Grisham brings home $155,000 a year to represent the first lady with the nation's media. That is a significant raise from last year of $40,000. That puts her high above the average American — her raise alone is more than many take home in a year — but still below the top dogs working in the Trump White House.

Grisham has been on the job since March 2017 and covered the first year in the White House, as well as Melania's embrace of typical first lady duties like the French state visit. She also has been on duty for Melania's surgery, and now the first lady's trips to see what's happening on immigration and the wardrobe choice that has drawn so much criticism.

Neither Trump nor Melania have commented on Grisham since she got the job, but Melania was positive then. "Stephanie is a wonderful addition to the team,” the first lady said in a statement. “She brings a wealth of experience and expertise to the job, and will be an incredible asset to my office as we build out our agenda, preserve our country’s rich traditions, and serve the American people.”

The president would likely agree. Grisham moved to the White House from the Trump campaign, where she was the head of the traveling press team.

Last year, Grisham was listed on the form as "Special Assistant to the President and Director of Communications for the Office of the First Lady." For that she took home $115,000.

In general, the Obama White House spent more on staffing in its final year. The total spend was nearly $40 million in Obama's last year, whereas this year Trump spent just over $35 million this year — a bit less even than last year (though the total number is also down, Trump is famous for firing staffers and having them quit).

But Obama employed more people than Trump did. Therefore Trump spends more per staff member, about $89,000 each compared with Obama's $73,051. Grisham is making above the median for either.