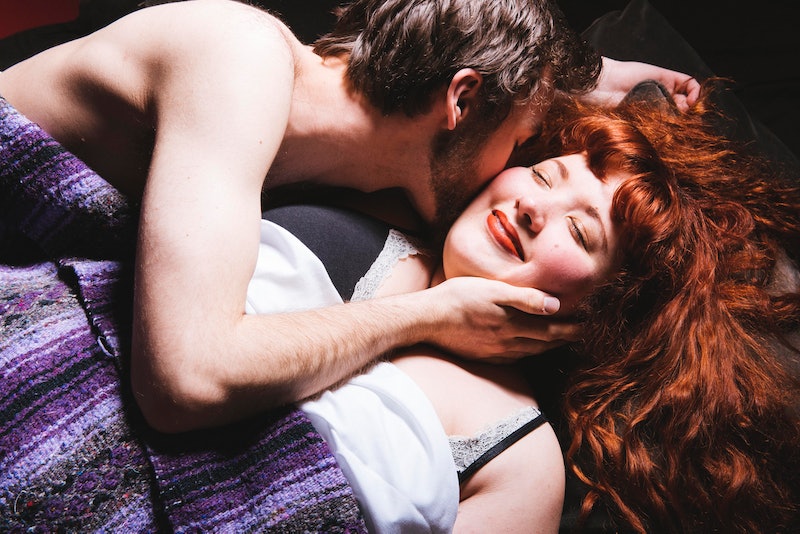 We worry far too much about whether we're having the "right" amount of sex. We worry that our sex drive is too low — or too high. We worry that a change in our sex life means something has gone horribly wrong in our relationship. But we really shouldn't worry because how often you have sex depends on you and your relationship. And new research from the Kinsey Institute for research in Sex, Reproduction and Gender says that age can actually have a lot to do with the "normal" amount of sex for us to be having.

I say "normal" in quotes for a reason. Because really, there is no normal. I don't care if you're 23 or 83, everyone has a different sex drive, different needs, and just different things that make them happy — and everyone's relationship is totally different. So if you are happy, if you and your partner are happy, it doesn't matter if you're never having sex or going at it like rabbits. It's totally up to you.

"A healthy sex drive is different for each person," Amy Levine, sex coach and founder of Ignite Your Pleasure, tells Bustle. "Overall, it's when we feel balanced in our desire (it feels good to us, as opposed to something being off whether too high or low) and sexually fulfilled whether it's alone or with a partner." So really, don't beat yourself up over the numbers.

But we're all curious people and it is interesting to see how age can affect our sex lives. Here's what the Kinsey Institute found.

Average Sex Sessions Per Week Went Down As People Aged

Then, 30- to 39-year-olds came in at only slightly less, having sex 86 times per year, which is about 1.6 times per week. Those from the 40 to 49 age range were much lower — they had sex 69 times per year, or about half the total for 18- to 29-year-olds. Life commitments were found to be a big part of this, as we gain more responsibility it can take up more time, which makes sense. That means sex gets put on the back burner.

"The younger people feel, the more likely they are to maintain high sexual satisfaction as they get older."

But — and there's a big but — if the participants felt younger they had more sex than average for their age group. It was about how young you feel in addition to how old you actually are.

"Perhaps not surprisingly, frequency, quality, and interest in sex all declined over that ten-year period," Dr. Justin Lehmiller, researcher and scholar, wrote in a Kinsey Institute post. "Also, consistent with past research, those who remained in better health tended to maintain more active and satisfying sex lives... At the same time, the younger people feel, the more likely they are to maintain high sexual satisfaction as they get older (or at least they’ll experience a much less noticeable change)."

So there you have it. Sex may change as you age, but feeling young is keeping it alive. But at the end of the day, just do what works for you — numbers be damned.