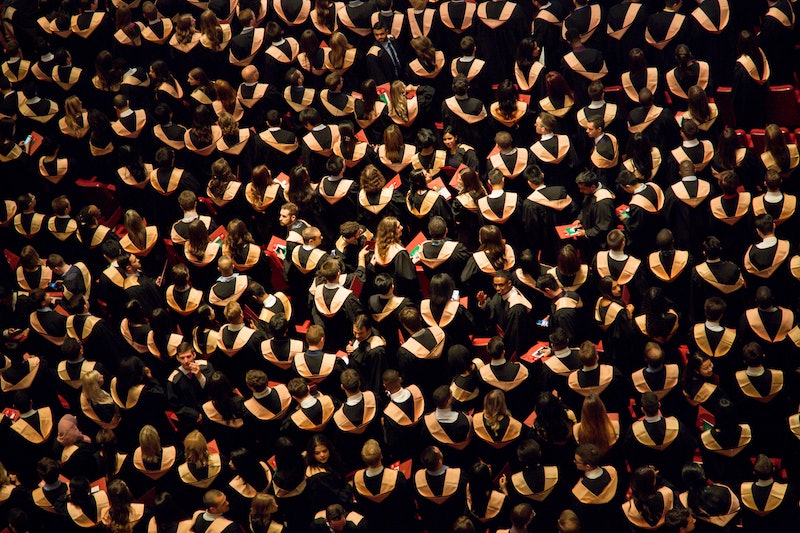 Debt is pretty much a widely accepted part of going to college in the U.S., with 71 percent of college graduates leaving school with student loans to pay off. The number is even higher for those who attend for-profit universities, with nearly 9 in 10 students being left with debt. The average college graduate owes $37,172, and the average 2017 graduate will make somewhere around $49,785, which doesn't make it easy to pay off tens of thousands in loans. It's not hard to see why student loans can cause stress, but a new study from finance company SoFi shows just how stressful student loans can feel. The company surveyed 1,200 of its members who have refinanced their student loans with SoFi, and over half of them reported feeling anxious or depressed because of their debt. Almost half — 43 percent — said it interfered with their self care.

This is a reminder of just how much we need education reform, but the new GOP tax proposal would actually make things worse for those with student loans. The plan would eliminate the student loan interest deduction, which allows graduates to claim interest paid during the year when filing taxes. Essentially, we have no guarantee that things will get better any time soon, and there's a chance it may all get much worse if the tax proposal becomes a reality.

Some other findings from the SoFi: Young adults are skipping out on trips with family members and friends and putting off starting families and buying homes because of their debt burden. And even those who aren't willing to cut off digits would still make sacrifices if it meant student loans would disappear — 75 percent of respondents said they would give up social media for a year for loan forgiveness, while 1 in 3 people would move back in with their parents. That isn't too far-fetched, considering that 15 percent of millennials live with their parents already.

"Thinking back to when I was an 18-year-old, [I was] like, 'Oh great, I got into college, and I got a great scholarship, but I'm still gonna have $50,000 worth of loans," Kate, a SoFi member, tells Bustle. "That wasn't a real number to me, I didn't really understand it." Nevertheless, Kate is able to practice self-care while managing her student loan debt — and the adverse mental health effects it comes with. "In terms of self-care, I can't just go get a facial when I want to. I definitely have to say, 'Is it really worth it?'" she says. "If I'm gonna spend money on something, I really need to make sure it's worth the time and the money and the value it's adding to my life."

Kristina, who was also able to refinance her student loans through SoFi, tells Bustle that her student loans payment "were equivalent to my rent. Refinancing allowed me to afford my apartment by myself versus dealing with nightmare roommates, and that was extremely helpful, stress-wise."

Student loans can feel overwhelming, and 26 percent of people have talked to a therapist about the stress that student loans bring. About 7 percent of people want to talk to a therapist about their debt but can't afford to. Something clearly needs to change — no one should have to sacrifice their emotional wellbeing in exchange for a college education.