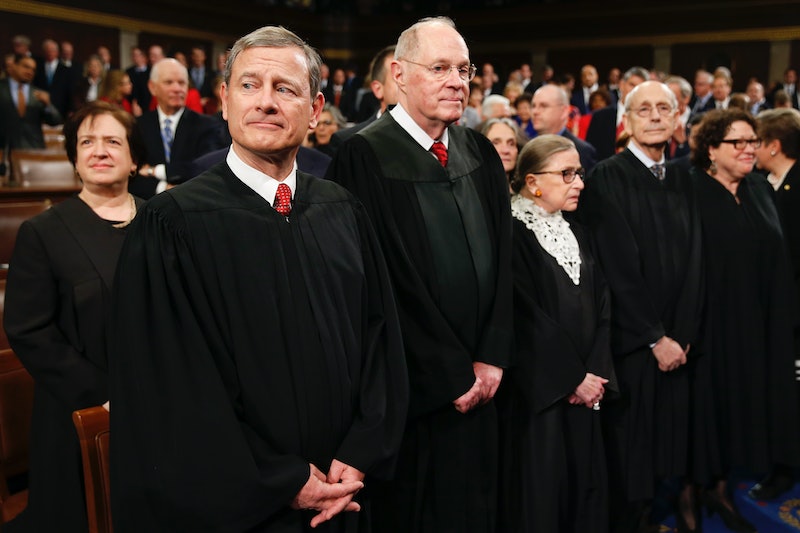 Thanks to President Trump's nomination of Brett Kavanaugh to the Supreme Court, people can’t get their minds off the highest court in the land. And the world has some questions. Some of them are tough to answer at this point, like how Kavanaugh will change how the court comes down on a range of issues including environmental regulation, gay rights, gun control, abortion — you get it, the list is long. There are other questions we can answer definitively, though, such as how much Supreme Court justices make for a living.

If the Senate decides to confirm him, Kavanaugh will not just have power to help dictate important government policies for decades to come. He’ll also have some newly acquired monetary power. We’re talking a six-figure salary, according to Business Insider.

In 2018, U.S. Courts figures show that the salary of a Supreme Court associate justice came in at $255,300. And the salary for Chief Justices is $267,000 this year, which makes John Roberts the justice with the highest salary.

This seems like a lot, but that salary on its own surprisingly wouldn’t put the justices in the top 1 percent. In 2016, the Economic Policy Institute calculated that a household in the top 1 percent of U.S. income earners overall included those making $389,436, before taxes. And that’s just the U.S. average. In Connecticut, for example, income must be at least $659,979 to qualify for the top 1 percent.

In Washington D.C. — where the justices work when they’re not on recess — the 1 percent must make at least $554,719. D.C. is also where Kavanaugh has served on the Court of Appeals District of Columbia Circuit since 2006. With all that said, The Supremes have extra ways of making that cash money, such as books, lectures, and speaking engagements at prestigious universities, CNBC points out.

If Kavanaugh, who’s earning $220,600 each year in his current role, is confirmed to the Supreme Court, he could be seeing an almost 16 percent raise, Business Insider reported.

And coincidentally enough, a potential pay bump could come at just the right time for Kavanaugh. According to a deep dive into Kavanaugh’s financial disclosures from The Washington Post’s Amy Brittain, Kavanaugh has accumulated tens of thousands of dollars in credit card debt. And some of that debt comes from buying baseball tickets to Washington Nationals games over the course of a decade. A White House spokesman told The Post that the debt came from season tickets, tickets to playoff games for Kavanaugh and his friends, as well as home improvements.

Brittain’s report also said Kavanaugh’s financial disclosures and information provided by the White House indicated that at times the Supreme Court nominee reported liabilities that may have “exceeded the value of his cash accounts and investment assets.” But things may look up for Kavanaugh, as justices seem to have knack for picking up side-hustle cash.

Aside from lectures and book royalties, some of the justices have also invested in lucrative stocks.

And in the past, those stocks have posed problems when it came to hearing cases. For example, Breyer couldn’t work on a patent case involving the technology conglomerate Cisco because he held $100,000 worth of stock in the company, according to U.S. News and World Report.

Then, once Alito recused himself in a case involving Coca-Cola because he owned stock in the company, which he sold of before the case was heard, Business Insider reported.

All in all, these justices are bringing in a lot of dough. And despite his baseball-fandom-rooted financial faux pas, Kavanaugh can expect a big pay raise if confirmed.