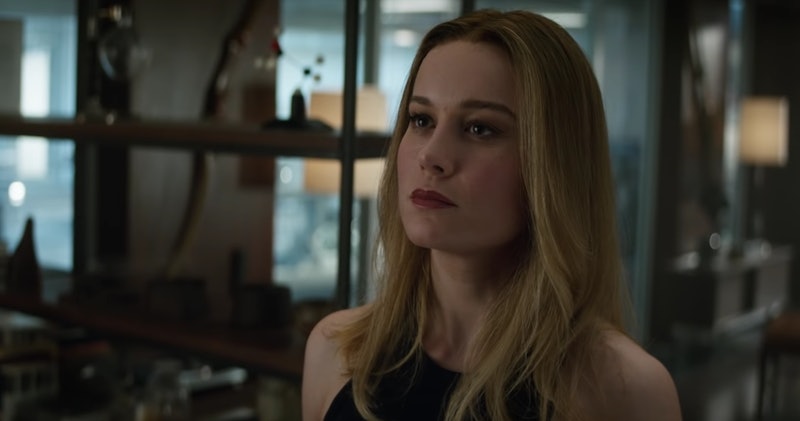 As the April 26 release date of Avengers: Endgame comes closer and closer, it's going to become increasingly difficult to think about anything other than the MCU. A couple of Marvel movies have been released between Infinity War and its follow-up, including Captain Marvel, which seems to lead right into the final chapter of Phase 3. But how much time passed between Captain Marvel and Endgame? Considering that Carol Danvers's first standalone movie throws the entire franchise back to the '90s, literal decades have gone by.

Infinity War takes place in 2017, and the main action of Captain Marvel occurs in 1995. So when does Endgame pick up after the tragic outcome of Infinity War? Nerdist points out that Scott Lang says in an Endgame trailer that he met Black Widow and Captain America "a few years ago at the airport," meaning that at least part of the movie takes place not very many years after Civil War, which is the battle he's referring to. The site also notes that Scott's daughter Cassie has been recast for this movie; Abby Ryder Fortson, who's now 10, played Cassie in both the Ant-Man movies. Emma Fuhrmann, who is 16, takes over the role in Endgame.

The fact that Endgame might not start right after Infinity War ended might come as a bit of a surprise, seeing as the aftermath of Thanos wiping out half of the earth's population seems like something that requires some cinematic explanation. Like, what did the surviving Avengers do after leaving Wakanda? When did that happen? While Shuri (Letitia Wright) didn't survive the mass-dusting, Okoye (Danai Gurira) lived, so one can imagine that she got to work immediately organizing the Wakandans and surviving Avengers to make an action plan.

It seems like people may have to just imagine those few hours following Thanos' disappearance, because Endgame definitely includes a time-jump at some point. In the trailer scene that shows Thor (Chris Hemsworth) meeting Captain Marvel, Natasha has hairstyle to the blonde bob she sports in Infinity War, but in another shot from the trailer, she has longer red hair with blonde tips. That very well could indicate that the storyline of Endgame unfolds over a long time, perhaps even years, with a time jump occurring during the movie itself.

If Endgame begins a year or two after Infinity War, that would mean that about 25 years has passed since Carol and Nick Fury met. So once Captain Marvel joins the Avengers for the upcoming showdown, she'll probably be a lot more confident in her superhero abilities than she was when we last saw her. (And she was already pretty confident!)

While the Avengers have been protecting Earth, Captain Marvel has been zipping all over the galaxy putting out other fires. And fans have to be hoping that they'll get some explanation of what exactly she's been up to in the quarter century since she blasted off at the end of her own movie. Then again, there's a lot to do, so we may have to wait until Captain Marvel 2 to actually get the details.