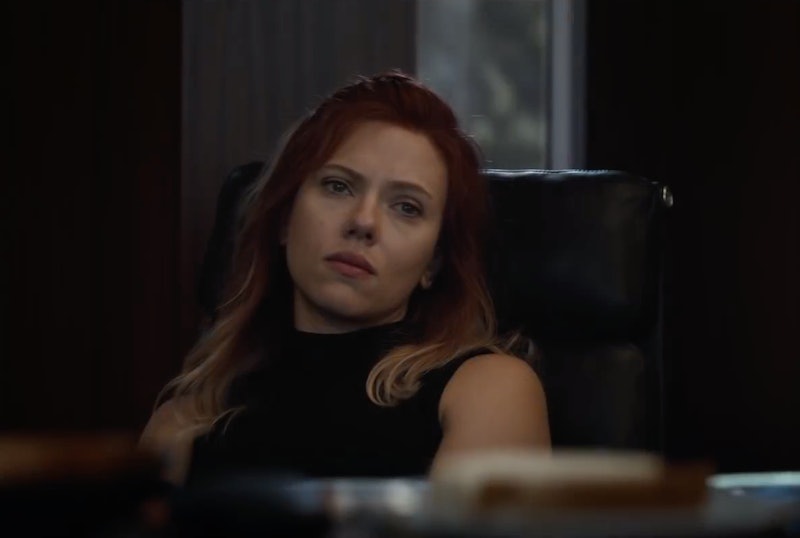 Marvel Studios has released a new trailer for its latest Avengers installment, Avengers: Endgame, and we already have a lot of questions. Frankly, most of them concern the evolving hairstyles of Black Widow (Scarlett Johansson). In the new Avengers 4 trailer, Black Widow’s hair frequently changes throughout the new clip, which has sent Marvel fans into a tizzy trying to figure out what her hair evolution could possibly mean. Our most pressing concerns also include the fate of our beloved Thor and the possible meanings of the Avengers’ new suits, but frankly, there’s nothing more important than Black Widow’s hair, which goes from blonde, to red, to red and blonde throughout the trailer.

After analyzing the trailer one frame at a time, many fans think that Black Widow’s changing hair could signal a major time jump within Avengers: Endgame. The first clue lies at the very end of the trailer, as Captain Marvel makes her introduction to the Avengers compound. In this scene, Black Widow is sporting a short blonde bob, the same style that she had at the end of Avengers: Infinity War. It’s safe to say that this scene likely takes place soon after the final events of the last Avengers movie, signaling that the film may start only a few days after the remaining Avengers return from Wakanda to the U.S.

But a scene earlier in the trailer may give fans the biggest clue into the timeline of Avengers: Endgame. In one key frame, Black Widow sits at a desk sporting an ombre style — red hair on top with dirty blonde tips. This sort of color transitions could mean that the superhero is gradually growing her hair out through the movie, from a dyed platinum blonde to her natural red roots.

We also see a brief shot of Black Widow sporting a longer blonde ‘do while she takes on shooting practice, and two shots of the superhero in full redhead mode — one of which is an intense frame featuring Hawkeye also sporting a suave new haircut.

It’s hard to predict exactly how much time passes through the movie just yet, but given these clues from the trailer, there’s enough time for Black Widow to completely grow her hair out and return to her red roots before going back into battle towards the end of the film. In other words, it might span a very long time.

Fans on social media seem to agree based solely on Black Widow's hair that Avengers: Endgame likely has a major time jump. But there are some Marvel enthusiasts who think that her hair evolution points to something bigger — namely, an entire alternate universe. Others theorized that time traveling could also play a role in the new movie, which would explain the superhero's constantly changing hairstyles, but also keep the exact timeline a mystery, while a few others have speculated that Black Widow simply changes her hair to reflect her mood, which is very relatable.

In the Marvel universe, the smallest details could signal a major plot development, especially important choices like the shaving of Captain America's beard and Hawkeye's smooth makeover. Black Widow's hair could truly mean anything, and we wouldn't have it any other way.