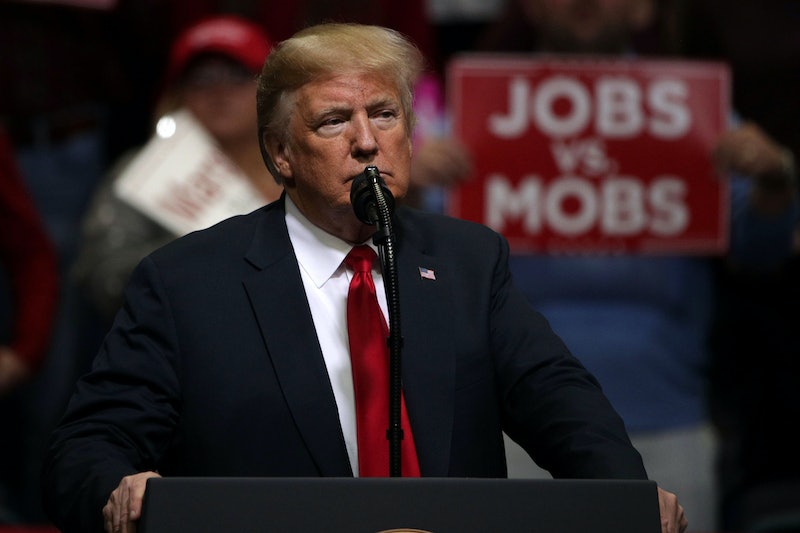 If you pay attention to what President Donald Trump says, then you might have noticed something in recent weeks. While you've probably noticed that he doesn't always hew exactly to the truth, how much Trump lies during the midterms has reached a new level of frequency, according to a Washington Post analysis.

There's one arena in which these claims tend to flow faster and more furiously, the Post's analysis suggests, and it often takes place in literal arenas. Trump's rallies tend to be the places where he lies the most — and his words paint a version of the Democratic Party so distorted as to be almost completely fictional. Taxes, health care, and the Second Amendment have all come up — but immigration is perhaps where Trump's most egregious false claims tend to come up.

In a televised speech from the White House, for example, Trump conflated refugees and asylum seekers with undocumented migrants, saying that there was an "influx" of them at the border and that the caravan of Central American migrants was an "invasion," according to NPR. Asylum seekers and refugees, however, are allowed by U.S. law to present themselves at the border — and the numbers have actually gone down recently.

The caravan of Central American migrants slowly making their towards the southern border is another target at the president's rallies. He has made various false or baseless claims about terrorists included in the group, "hardened criminals" among the migrants, and Democratic funding for the caravan, as The Guardian described.

In a more specific case, Trump tweeted a campaign ad blaming Democrats for letting an undocumented man into the country who would go on to kill two police officers in 2014 — but as The Washington Post explained, it was actually mainly Republicans who handled his case. Trump also completely made up a bill that he claimed Democrats would pass if they won the Senate, Vox wrote.

"Every single Democrat in the US Senate has signed up for the Open Borders — and it’s a bill! It’s called the Open Borders Bill!" Trump said at a rally in Kansas, saying that California Sen. Dianne Feinstein had written the non-existent bill.

At two Trump rallies in West Virginia and Indiana that The New York Times fact checked, moreover, Trump doubled down on his false claim about Democrats wanting open borders and inviting numerous migrant caravans. In addition to that, though, he also added lies about — among other things — Republicans fighting to keep health care coverage of pre-existing conditions (Democrats have fought to keep this, against all Republican efforts), and Democrats using "socialism to turn America into Venezuela."

The Washington Post interviewed several people who see Trump as more truthful than most politicians — but lately, his statements very often do not correspond with reality.