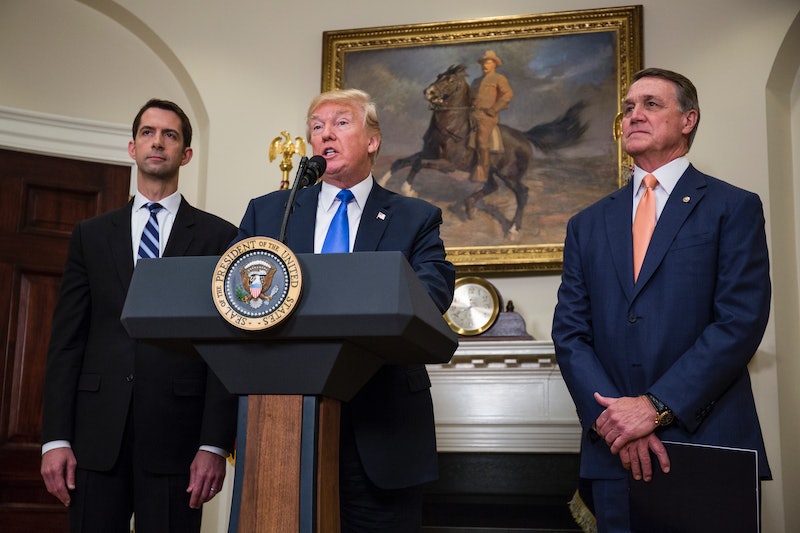 With health care behind them and tax reform still coming down the pipeline, the political debate has moved on to the new immigration bill that Trump introduced Wednesday. How much will the RAISE Act cost? With this legislation, there's no official Congressional Budget Office (CBO) estimate, but experts say it could cost the economy greatly because immigration could be cut in half.

Many bills that are sent before Congress receive an official cost estimate from the CBO that explain the economic implications of a bill. Consider the Obamacare repeal and replace efforts and the role that the CBO's ratings played in the debate. The office did the estimates to see how many people would gain or lose insurance and what the budget implications would be.

That hasn't been done yet with the RAISE Act, which, despite the big drum roll on Wednesday, was introduced originally back in February. It's therefore impossible to say whether it would save or cost extra on the budget, raise or lower tax collection, or otherwise directly affect the nation's federal coffers. But there's more to a bill than just that. Immigration reform can cost the economy jobs and economic growth for example — or have the opposite effect.

One expert explained that despite its name, the Reforming American Immigration for a Strong Economy (RAISE) Act, it would actually be detrimental to the U.S. economy. Donald Kerwin, director of the Center for Migration Studies, spoke with VICE about the new bill, and he had some concerns.

"We would be going from admitting 1 million a year in a country of 330 million people to one that's admitting 500,000. I think it's fairly reckless, economically reckless," Kerwin told VICE, explaining that many immigrants who don't receive a formal education have actually trained on the job and are prepared to do many of the jobs that keep the economy moving like construction:

There aren't sufficient U.S. workers willing to do this work. You're not admitting lots of unskilled workers to start with, there are very few legal channels for them to come in, and now you're actually restricting it even more.

Rick Newman, a columnist at Yahoo! Finance, made an even more compelling argument for the economic implications. He said that when there are more people working in an economy, there are "more people spending money, helping the economy grow and creating new jobs." That means that the new jobs that an immigrant fills can actually boost the economy and create another new job for someone who's already here.

He quoted Mark Zandi, who is the chief economist at Moody’s Analysts. "More immigration is the single best way to consistently lift economic growth and standards of living," Zandi said at a conference.

Even though there is no CBO estimate for this bill yet, the office has scored other immigration reform bills in the past, as Newman points out. The last one they worked on was in 2013, and instead of cutting immigration, it expanded the legal pathways. The estimate at the time said it would grow the economy.

So until the CBO does a full estimate, it's hard to say what the bill will cost the budget or the economy more broadly. But the evidence seems to point to the RAISE Act being bad for American workers if it becomes a drag on the economy.