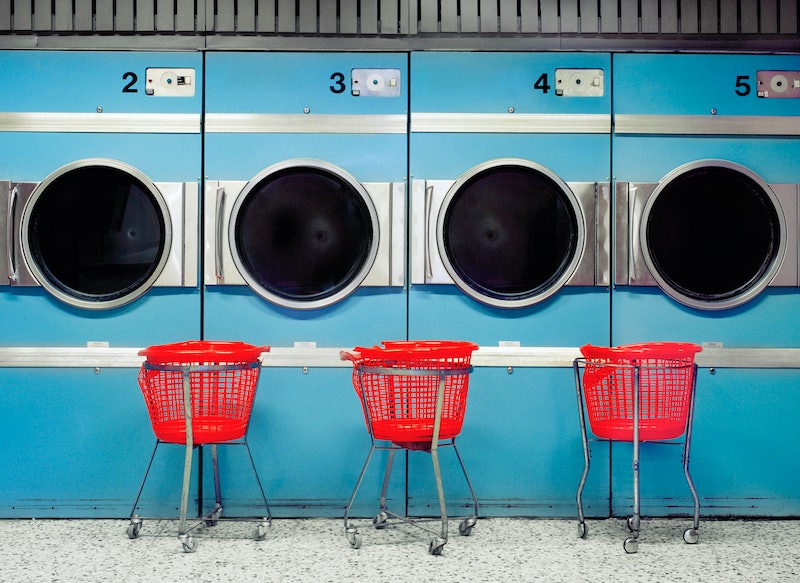 While the devotedly hygienic among you might insist that you should regularly wash your clothes, designer Stella McCartney has a different take on the issue. The environmentally conscious fashion maven briefly commented on the topic during an interview with The Guardian, and readers have a lot of opinions about it. Whether your concerns are fashion driven, environmental, or based on a love of all things hygiene related, you might be wondering how often you should wash your clothes.

McCartney told The Guardian that, as a bespoke fashion student, she learned that not washing certain clothing items can help them last longer. “Basically, in life, rule of thumb: If you don't absolutely have to clean anything, don't clean it.” Instead, it's best to "let the dirt dry and you brush it off,” she said. And while that all sounds fine in theory, you might be asking how you'd go about this while avoiding, well, grossness.

When it comes to hygiene and the health of your skin, Dr. John Zampella, IV, MD, of New York University (NYU) Langone's Medical Center tells Bustle that there are good reasons to wash your clothes.

Dr. Zampella adds that although infections from clothes aren't necessarily common, they're not impossible. "If clothes are dirty with body fluids (sweat, blood etc), those are the most likely culprits to contain and harbor infectious agents, and those clothes should be washed," he says. "I would say that if there is visible dirt to brush off, it's probably time to wash those pants no matter how expensive they were."

Hygienic concerns aside, McCartney mentioned the significant impact washing machines have on the environment. The National Park Service (NPS) says that the average residential washing machine uses roughly 41 gallons of water per load, while commercial washers use about 34.74 thousand gallons of water each year. While modern clothes washers use about 70% less energy today than they did 40 years ago, according to the NPS, a clothes dryer accounts for up to 6% of energy use in the average home.

No matter how often you decide to wash your clothes, "going green" with your laundry habits can make a difference, according to the NPS. Avoiding scented detergents and dryer sheets, for example, can help cut back on hazardous chemical emissions, and can also lessen the risk of allergic skin reactions, according to Dr. Zampella. Similarly, cleaning your clothing in cold water, and washing and drying full loads at the appropriate water setting are simple ways to reduce your impact. Air-drying your clothes can also help, the NPS notes, and may also extend the life of certain fabrics.

If you want to make your clothes last, but aren’t quite sold on the notion of not washing them, the American Cleaning Institute (ACI) says that laundry tips vary. While you’ll want to toss your socks, underwear, tights, t-shirts, and tank tops into the wash after each wear, bras, pajamas, and jeans can be worn up to three times before going in the laundry, says the ACI. Dress clothes such as suits and blouses can be worn a few times before washing, and having your winter coat washed once or twice per season should do the trick, according to the institute. Following the laundry guides on your clothing labels can also help you figure out how best to care for different fabrics.

No matter what your stance on laundry schedules might be, taking care of your clothes, while being mindful of the environmental impact, is totally doable. And when it comes to washing your bra, that little life detail is just between you and you.

This article was originally published on July 25, 2019