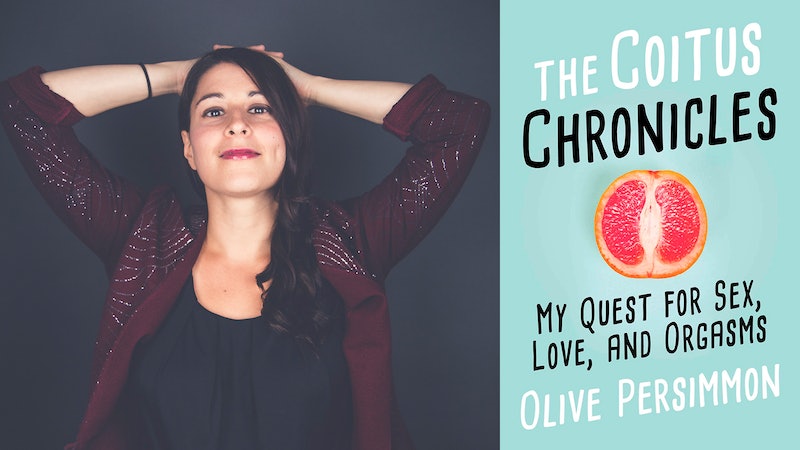 While other teenagers were beginning to discover sex and develop crushes, Persimmon, a self-proclaimed "Danny DeVito lookalike," was disappointed that no one seemed to be particularly interested in her. It didn’t help that her mother was still dressing her (hello, pom-pom glitter sweatshirts!) and one of her favorite pastimes was sitting in an inflatable chair, smack in the middle of the front lawn of her home in Ohio.

She was 28 years old when she lost her virginity to a "Ken doll look-alike," a story chronicled in her new book The Coitus Chronicles: My Quest for Sex, Love and Orgasms. The guy she lost it to was more interested in putting his patio table together than sleeping with her and so, after having sex with him in the missionary position a grand total of eight times, they broke up. Her biggest fear at the time was that she might die never having tried the reverse cowgirl position.

"It definitely wasn’t the best introduction to the world of sex," Persimmon, now 32, tells Bustle.

'The Coitus Chronicles' by Olive Persimmon

That first relationship was followed by two years of an on-again-off-again friend-with-benefits situation. Her partner was caring and attentive. She felt as if she’d undergone a sexual redemption as a reward for having previously slept with a man more interested in lawn furniture. Persimmon says the relationship, however, only resulted in penetrative sex on one occasion. A month after they slept together, Persimmon wound up moving to New York City in what she now calls a "piss poor plan." She tempted at first, then accepted a job in the non-profit sector. Little did she know at the time, she was at the beginning of the longest dry spell of her sex life, a five-year-long experience that prompted her to write her first book, Unintentionally Celibate, released in 2015.

"I used comedy as a defense mechanism to deflect the fact that I was going through a bonafide sex rut," she says.

Of course, no one is owed sex, and many people simply do not want to be sexually active for a variety of reasons, but Persimmon did want to have sex. Luckily for her, she would soon be introduced to the sex-positive community, where conversations about pleasure, consent, and boundaries are key.

It began one Sunday night when she wound up at a party with a small group of people, some of whom were — unbeknownst to her at the time — active members of the sex-positive community, something she was completely unfamiliar with at the time.

When her friend Renee enthusiastically began talking about OM’ing, Persimmon, who’d recently gotten into yoga, was eager to join the conversation. Only moments later, she realized her friend wasn't discussing the OM chanting she participated in at the start and finish of a yoga session. She was referring to Orgasmic Meditation, a partnered experience that involves stroking around the clitoris for a set amount of time.

It was only a matter of time until the conversation shifted to her dry spell.

“It was like a spontaneous 'sex-er-vention,'" says Persimmon when she recounts how Renee encouraged her to give Orgasmic Meditation a try in the hopes of unblocking her sexual energy. "Initially, I protested and that’s when Renee said, 'This is your next book. You should spend a year exploring a sex-positive lifestyle in NYC,'" she says.

Over the next two years, while working as a public speaking expert and doing TedX talks, Persimmon took on the boldest challenge of her life: She learned to be more open sexually and to say "yes" more often.

Persimmon wasn't initially convinced, but the more she listened, the more intrigued she became. She thought about the proposition this experiment could present. "I could explore sex and dating, fix my love life and write a book about it," she says. "I was in."

Maybe she wouldn’t die without doing reverse cowgirl, after all.

"The seed had been planted and because I was going to write a book about it, I had permission to explore and experiment and embrace the whole experience," she says.

A self-proclaimed "control freak" armed with a quirky sense of humor and a solid poker face, Persimmon immersed herself in the sex-positive community, only coming up for air to share her escapades with readers, one experience at a time. She explored Orgasmic Meditation, was shadowed professional pickup artist who introduced her to the Rejection Challenge (the art of putting yourself out there and hitting on enough people so it softens the blow of being rejected), paid a stranger to come her apartment for a platonic cuddle, and attended a Squirt Lab alone.

"You don’t know what you don’t know," Permisson says. "A lot of this wasn’t even on my radar".

Persimmon’s unwavering curiosity allows readers a unique opportunity to take a front-row seat to New York's kink community. Persimmon fully embraces her quest to find sex, love, and orgasms in what readers will come to know as her signature endearingly awkward way. While she set out to write a so-called anthem to single people, her story is actually a powerful lesson about self-discovery and the value of saying "yes" to things that scare you.

As for whether she ever got to try out the reverse-cowgirl, you’ll have to find out for yourself.