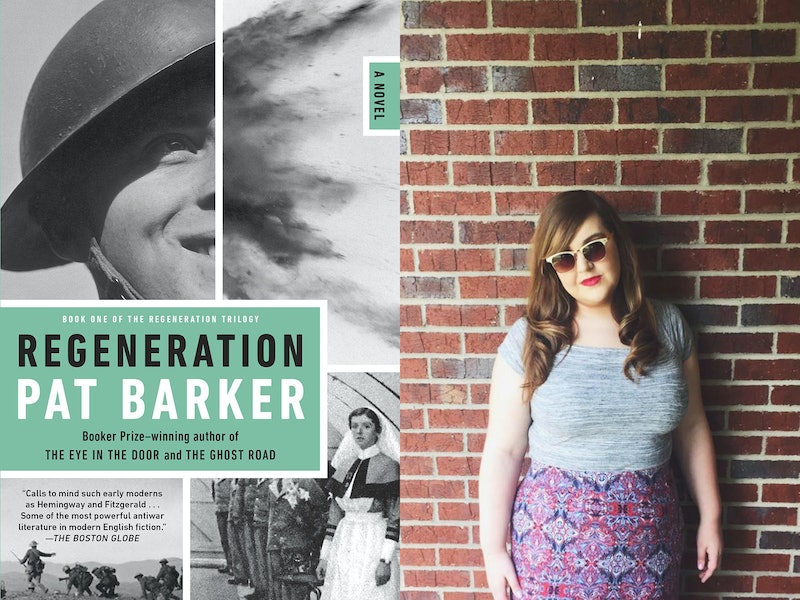 I was a college freshman in 2011, and it was the spring semester, though that year felt uncommonly cold. Every Tuesday and Thursday, I would trek up the hill in my winter gear and — by the time I reached the top — my layers felt soggier than my morning cereal. For weeks, my classmates had been discussing Regeneration by Pat Barker, a historical novel centered around war neuroses, shell-shock, and the unrest of World War I. I could have been contributing to the conversation — considering the class participation policy, I probably should’ve been — but I was still stuck on page ten. There was a word printed there, second paragraph. Stammer. In fact, it was printed twice, same sentence. Stammer.

It was the British spelling of a word that I knew well. I had been born with a neurological speech impediment, a stutter, which I now know to be lifelong. But at 18-years-old, deeply covert about my disability and suddenly exposed to a novel with not only one character who stuttered — but two — the book felt overwhelming. Reading on my loft twin bed, inside my dorm room, I cried at every mention of the word. Stammer. How can Pat Barker write about stuttering, I thought, when I can barely bring myself to read past page ten?

The course instructor was Dr. Alison Langdon, a literature professor. She would lead the class discussion and cross her legs, nonchalantly, her pencil skirts and patterned dresses revealing plastic braces on her legs. The braces looked durable, clinical, the quality signifying a type of longevity. I didn’t know yet what her condition was, but it seemed chronic. I had noticed the braces, and felt a surge of admiration watching her wear them so visibly. Immediately I wanted to know — how did she live her life unapologetically?

It seemed to me that I’d spent my entire life in shame. Lately, I had taken severe measures to avoid stuttering: substituting words, erratic and at random, until the original meaning of my sentence was unrecognizable; sometimes in conversation I would lie, though unintentionally, saying whatever word seemed to reach to the surface of my mouth.

Worst of all, I started to push my body, contort it, cause myself pain, believing the words could be ejected by force. This did sometimes work, though the method began to intensify. Making a fist while speaking seemed, at first, quite harmless; then came the pinching of skin, the kicking of my own ankle; then my fingernails dug into my palms, sometimes drawing blood; finally, I began carrying a guitar string—wound tight, like a steel bracelet—and when I made phone calls for my after-school job, I used the sharp end to cuts into my wrists.

I arrived at college ashamed of these methods and eager to change. But every day, in every conversation‚ I stuttered. Even in moments of fluency, I dreaded the stutter’s eventual return. My disability turned every joy into a shade of gray. I couldn’t imagine enjoying life until I had been cured — an impossible task, of course, since no cure for stuttering exists.

But in my mind, beneath the self-loathing, I often thought of Dr. Langdon and her leg braces. Sometimes I pictured page ten of Pat Barker’s novel. Stammer. Written so boldly on the page. I attended our twice-weekly class meetings with a nervous sort of zeal. I entered Dr. Langdon’s classroom thinking—what will I learn today?

It turned out, a great deal.

Dr. Langdon paints a picture of her teenage herself. “I was a California punk kid,” she tells me. She describes the miniskirts, the mismatched patterns, the various shades of black. “And then, on top of everything—” she pauses, smiles. “I had the braces.”

It’s 2017, and Dr. Langdon is sitting inside her home office. It’s the same home she’s lived in since moving to Kentucky, the same home where I dog-sat her two pups the summer after my senior year. She’s still teaching at the same university where we met, six years ago. I’m in graduate school now, my second year as an MFA student in central Arkansas. We live 400 miles apart, and mostly keep in touch through social media. But today we’ve scheduled a Skype call, one that lasts over two hours.

“So you never tried to h-h-h-hi-hi-hi-hide your bbbbbbbbraces?” I ask. “Not-not-not-not-not even as a kid?”

“It was never about hiding them or showing them,” she says. “It was about the aesthetic, the fashion.” She shrugs earnestly. “I just wore clothes that I liked.”

Dr. Langdon wasn’t born with a disability. She contracted the syndrome after catching a virus — a cold, or maybe the flu. Something that seemed harmless at the time. Until her calves started burning in PE class, sabotaging her performance during the 100-yard dash. She went to see her pediatrician, and found she could no longer walk in a straight line. She spent months in the hospital.

The eventual diagnosis was Guillain-Barré syndrome, a disorder that causes the body’s immune system to attack its nerves; it also triggers paralysis. The syndrome is rare, though I’ve heard of it before. My grandfather had it. Dr. Langdon spent an entire school year at home. Some days she brushed her teeth in bed. She was only 11-years-old when she was diagnosed.

She had been an active kid, the type to spend all summer strapped inside her roller-skates. But after Guillain-Barré, she began to feel complacent. She spent her seventh-grade year inside a wheelchair. Once the treatments started working—the plasma exchange, the physical therapy—she transitioned to the leg braces. But the syndrome is chronic, lifelong. She knew that she would spend the rest of her life wearing braces.

But part of her did recover: her bravado. Her nerve. “I tried rollerblading in my twenties,” she admits. “I figured the boots were stiff, like my braces.” She grins, shakes her head discerningly. “I didn’t realize that — when I walk — I bear my weight on my heels. In the rollerblades, I lost my balance, and...” With her hands, she shows an upright figure sliding forward. She laughs. “I fell right on my ass.”

At the end of the spring semester, still eighteen, still stuttering, I decided to visit Dr. Langdon in her office. I sat across from her at her desk, noticing the dogwood trees in full bloom through her window.

She’s glad I’ve stopped by, she said. She’s worried that reading Regeneration has made me uncomfortable. Disability is a tender topic, she knows. Most fictional accounts get it wrong.

It’s true. In the novel (and real life) Wilfred Owen was a poet and a solider; William Rivers was a respected military psychiatrist with an ambivalence towards war. Both men were aware of and effected by their stutters, of course. There’s an honesty in that. But they are not stereotypes. Their identities have not been boiled down to disability.

Dr. Langdon nodded. “I’m glad to hear that,” she said. “I think there’s a real power in representation.” She shuffled her feet, the leg braces silently hitting her desk. “It makes a difference to see yourself reflected.”

I thought of the other stuttering characters I’ve encountered. No books came to mind, but there’s the tortured schoolteacher in The Sixth Sense, Adam Sadler’s protagonist in The Waterboy, even the Porky Pig cartoon. For years I saw myself there, inside these characters, red-faced with shame and ridicule.

But Regeneration. My copy was safe inside my backpack — highlighted, well-used. I thought of all the things Owen and Rivers represent: poetry and knowledge, sensitivity and discernment.

My sophomore year, Dr. Langdon asked me to be her teacher’s assistant. I was instantly flattered and terrified. I was still a covert stutterer and rarely acknowledged my disability. All my life I had avoided public speaking, rushing through class presentations and feeling anxious for days afterwards. How could I make this situation different?

I took time to think it over. And then I accepted.

On the first day of class, I sat beside Dr. Langdon at the front. I introduced myself. “Hi, I’m Ra-Ra-Ra-Rachel, I’m a s-s-s-s-sophomore creative w-w-w-w-wr-wr-writing student.” I took a deep breath. “I have a s-s-s-s-stutter, but I w-w-w-w-won’t make a bbbbbbig deal out if it if-if-if-if you don’t.”

There was a pause. A classroom full of freshman peered back at us—me, the teacher’s assistant with a stutter; Dr. Langdon, the professor wearing leg braces. In the silence, I thought we must have failed. Could I ever be seen beyond my disability?

Dr. Langdon moved forward. We began reviewing the syllabus, the reading list, and before I realized it, weeks had passed and we were discussing mid-terms, quizzes, Dante’s Inferno. I met with each student and gave feedback on their papers. Life moved, grew, changed.

Later that year, I was challenged in a writing class to define myself in words. Here’s the first thing I wrote, the chronology intentional: Writer, daughter, friend. Person who stutters.