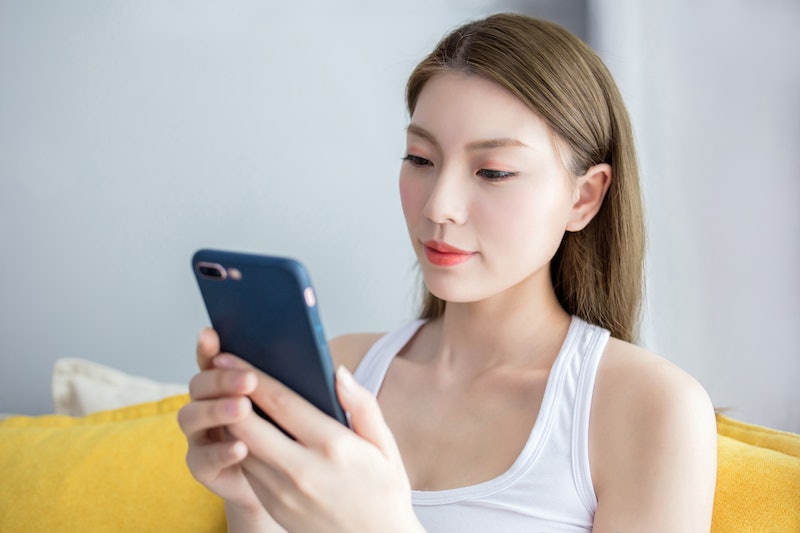 When Melissa*, 43, began social distancing with her spouse, she knew she'd quickly grow restless in her relationship. What she didn't anticipate, however, was that her long-term affair would begin to thrive. While self-isolated, she's been sexting an old lover, sending them daily pictures and videos, unbothered that her husband could be peeking over her shoulder. "I would say the cadence is freer, lighter, more intimate, and filled with deep longing," she tells Bustle. "It’s all oddly romantic, like a fairytale, or a dream of a magical reunion."

Melissa, who reconciled with her lover amid the pandemic, says the mutual acknowledgment that the two will be unable to see each other face-to-face has added a "sexy element" to their relationship. But she isn't sure the affair will last in the long-run, once quarantine is over. "I sometimes wonder whether or not I am in it for the build-up to the post-isolation hookup, or if I really care [for them]," Melissa says. "It’s been hard for me to distinguish between the two."

It's that excitement — the longing for physical contact, the edging without a release — that has many igniting old flames or embarking on new affairs. According to a representative from Ashley Madison, a dating site for married individuals that has long helped facilitate infidelity, over 17,000 new members have joined daily since shelter-at-home orders began across the United States.

If you’ve been in sweats for more than four weeks, it can be reassuring to meet someone online to flirt with who can make you feel sexy.

"People are curious and looking for something to distract them from their current state of lockdown," Dr. Tammy Nelson, Ph.D., a sex and relationship expert and author of When You’re the One Who Cheats, tells Bustle.

According to Nelson, joining a site like Ashley Madison, swiping right on a dating app while fielding texts from your partner, or simply sexting with an old acquaintance while on a Zoom call with your SO can add an element of intrigue and a much-needed twist to an otherwise mundane and predictable daily schedule.

"If you’ve been in yoga pants or sweats for more than four weeks, it can be reassuring to meet someone online to flirt with who can make you feel attractive and sexy," Nelson says.

The allure of an affair may be even more intense for those who are not getting along with their partner while sheltering at home together. Ashley Madison reports that 41% of its members have become less attracted to their spouse while quarantining, and 62% are no longer having sex. Nelson says this comes as no surprise. "If the isolation of social distancing at home isn’t helping your sex life, it makes sense that you might try to find it elsewhere," she says.

But William Schroeder, LPC, NCC, a professional counselor and co-owner of Just Mind, believes that emotional or physical cheating while confined to a small space might not be worth the cost of a cheap thrill. With so many people's routines disrupted, so little space for direct contact, high stress levels, financial concerns, and family pressure, the ability to maintain an affair may cause more grief than relief. In fact, some folks won't have the energy to commit to multiple relationships.

We have been maintaining [our affair] through daily phone calls, disguised as meetings.

That's exactly what Julia*, 28, has been doing to communicate with her lover. "We have been maintaining [our affair] through daily phone calls, disguised as meetings," she tells Bustle.

Social distancing has also offered people different avenues to experiment with infidelity if they've always been curious about having an affair, but aren't ready to fully commit. While unable to leave home, people have the time to reach out, form cyber relationships, and test the waters of infidelity, without having to risk actually meeting up in person, or charging a hotel room to your credit card.

But in spite of the temptation to continue thrill-seeking, Schroeder says some couples are also using the time at home to focus on their relationship, and iron out problems. It's when all else fails, and there's nothing left to say, that eyes (or, rather, mousepads) begin to wander.

"I feel like I finally have something exciting to look forward to," Melissa says.

Dr. Tammy Nelson, Ph.D., a sex and relationship expert and author of When You’re the One Who Cheats