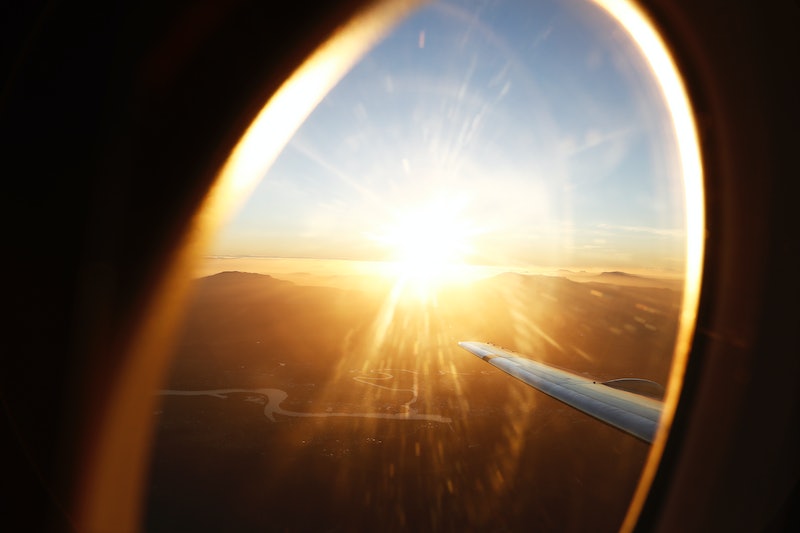 Planes are a major part of our transport landscape, with 1% of the global GDP every year — around $871 billion — spent on air travel, the International Air Transport Association (IATA) says. Unfortunately, though, it's caused some serious problems with emissions and air pollution. If you fly regularly, or want to know how to mitigate the cost of taking that trip to a far-flung destination long dream flight, here's the lowdown on how plane flights cause environmental problems, and what to do to help.

The biggest problem with flying long-haul is the carbon emissions that it generates. Planes burn large amounts of fuel both during take-off and while in the air — take-off alone may use up to 25% of a plane's fuel. According to the Financial Times, the IATA found that air travel was the source of 2% of all man-made carbon dioxide in 2017. (Carbon dioxide is a greenhouse gas that traps heat within the earth's atmosphere, and is a major factor in climate change.) The New York Times also reported in 2017 that statistics indicate that a round-trip flight from New York to San Francisco "emits about 0.9 metric tons of carbon dioxide per person. For an American, that represents about one-eighteenth of your carbon emissions for the year." And the numbers climb if you're flying further distances.

If you're traveling somewhere remote and, like most of us, have time constraints — in other words, you can't spend four months on a boat — air travel is really your only option. And researchers explain that's one of the big reasons behind its environmental impact: people don't have a choice.

"Unlike other sectors where there might be a greener alternative (solar not coal, LEDs not lightbulbs etc), there is currently no way to fly 8 million people every day without burning lots of dirty kerosene," environmental sociologist Roger Tyers wrote for The Conversation in 2017.

Airlines are developing ways to use cleaner and more sustainable energy in the air — Rolls-Royce, which produces many of the planes used in long-haul travel, revealed in 2018 that it was working on an UltraFan Engine that would improve fuel efficiency and reduce emissions, and other airlines are exploring changing engines mid-flight, which would reduce the fuel burned whenever a plane lands to refuel. However, aviation hasn't kept pace with other transport industries when it comes to exploring alternative fuel sources.

Long-haul flights are not only consistently bad for the environment, they're also getting more popular — which increases their environmental impact. Umair Irfan reported for Vox in 2019 that in 2018 more people traveled by plane than ever before: a whopping 4.3 billion passengers, an increase of 38 million from 2017. "Global international aviation emissions are projected will be 70 percent greater than in 2005. By the middle of the century, they are slated to increase by upward of 700 percent," Vox added. And that means a lot more carbon — and a lot more climate issues.

Beyond carbon dioxide, aircraft engines also produce other nasties that contribute to air pollution worldwide. "Aviation-related aerosol emissions contribute to the formation of contrail cirrus clouds that can alter upper tropospheric radiation and water budgets, and therefore climate," a study in Nature noted in 2017. In plain English, the chemical residue created by planes can alter the world's climate.

Particulates and nitrogen oxides are also found in the trails that planes leave, and they're not great for our health. The Guardian reported in 2016 that nitrogen oxides from planes have "doubled since 1990 and are forecast to rise 43% by 2035" — which is a massive issue, as nitrogen oxide exposure can cause health issues respiratory diseases and lung cancer.

Fortunately, there's a considerable amount that we can actually do to help make aviation less carbon-intensive. For starters, fly less, and explore other modes of transport; they may also end up being cheaper. When biofuels and sustainable sources of energy are more common in flying, use your money to show you support that. And use a reputable carbon offset program where you attempt to mitigate the carbon cost of your flight through other carbon-reduction techniques. Airlines often do this themselves, but it's worth trying to make a contribution that might help the worldwide carbon problem. Also, try to fly direct, as aircraft burn more emissions during take-off, so lots of short-haul hopping around may end up being more damaging than a single, long-haul flight.

The environmental costs of flying, even for a short trip across the country, can be pretty profound. However, with a few good consumer choices — and pressure on airlines to invest in cleaner energy — you can reduce the impact of your travel.