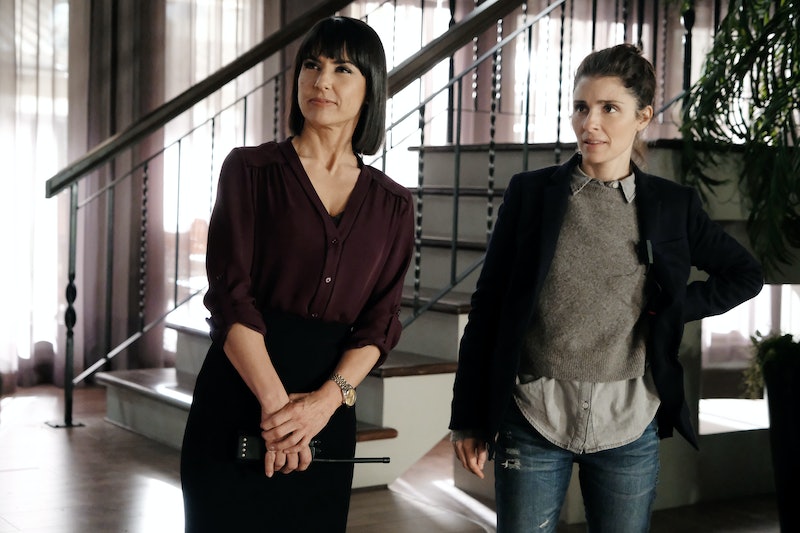 If UnREAL's fictionalized version of the job is to believed, working on a show like The Bachelor or The Bachelorette is something that shouldn’t be done for a long time — too many seasons spent manipulating other people, and you start to lose sight of what it’s like to treat people nicely. To treat people fairly. Take, for example, Quinn. Quinn thinks she’s helping out the women of UnREAL, but really, her twisted machinations single her out as just plain cruel. Spoilers for the March 19 episode.

There was a time when Quinn was on top of the world — Everlasting, the Bachelor-esque dating show she co-created — was a ratings juggernaut, and she was in love with Chet, the other creator and a general bigwig in the television business. But following a deadly car crash and disastrous ratings, Everlasting is on its last legs, and Quinn is on her last nerve. She’s alone, relationship-wise, because Chet left her, Rachel left her, and she found out last season that she can’t have children. But instead of these hardships making Quinn a more empathetic and kind person, Quinn has doubled down on the “tough bitch” shtick that got her to where she is today. The only difference is that now, there’s no gooey caramel center beneath the crispy exterior — Quinn is cold and hard, and there’s no going back.

And this coldness reflects itself in the way that she reacts to the women around her. Quinn likes to talk a big game about empowering women, but in reality, the way she treats her staff is not just unprofessional, but nasty, too. Rachel was at the top of Quinn’s producer list for years, but now that Rachel is asserting herself, not wanting to be a part of Quinn’s manipulations (Rachel has her own problems), Quinn seeks to punish Rachel. Quinn knew that Rachel had eyes for a particular contestant on the show — which is a no-no, but we have to have some relative morality here — so Quinn seduced him and slept with him instead, basically just so Rachel couldn’t have him. Quinn has played this withholding game for Rachel for years, but now, Rachel doesn’t want to play back.

Madison was just a production assistant when she started back in Season 1, but now, she’s sold a pilot and she wants to make her mark. In order to do that, she’s sleeping with the head of the network. It’s ill-advised, but Madison is a grown woman who can make her own choices here. Quinn is weirdly jealous of Madison’s youth and eye for what’s next, and so, she’s taking her frustration out on Madison. But when she calls Madison aside in "Confront," Quinn frames it as that she’s just trying to help. She tells Madison:

"You don’t get it, do you? I’m hard on you because I’m trying to help you. Do you think Rachel got so good at her job because I was nice to her? You should be looking for a career that lasts and means something. Slow down, all right? You’re trying to cut to the front of the line with Gary, and I promise you, that is not going to end well."

This tactic is as weird and damaging as when society tells little girls that the little boys who are mean to them are the ones that like them the most. Quinn is terrible to people she loves, and they’re just supposed to put up with that. In reality, Quinn is deeply insecure, and what she calls building the women around her up is simply needlessly tearing them down.

And yet Quinn definitely doesn’t believe that what she’s doing is wrong, because it’s gotten her to where she is today. But what does she have to show for it? She’s driven everyone who could deign to get close to her away, and all she has is her job — a job that’s slowly sinking into the ether. At one point, Quinn had it all figured out, and she thinks that women like Madison and Rachel should follow her lead. But today, Quinn’s creeping irrelevancy is making her blind, and it’s making her meaner that before. It’s only a matter of time before she ends up truly alone and for good.

More like this
It’s Official: 'The Bachelorette' Is No Longer A Fairy Tale
By Samantha Allen
What's New On Netflix: A Third '365 Days' Movie & Lili Reinhart’s New Film
By Arya Roshanian
What’s New On Netflix: 'Never Have I Ever' & 'Indian Matchmaking' Return
By Arya Roshanian
Everything To Know About The HBO Max & Discovery+ Streaming Service Merger
By Brad Witter
Get Even More From Bustle — Sign Up For The Newsletter