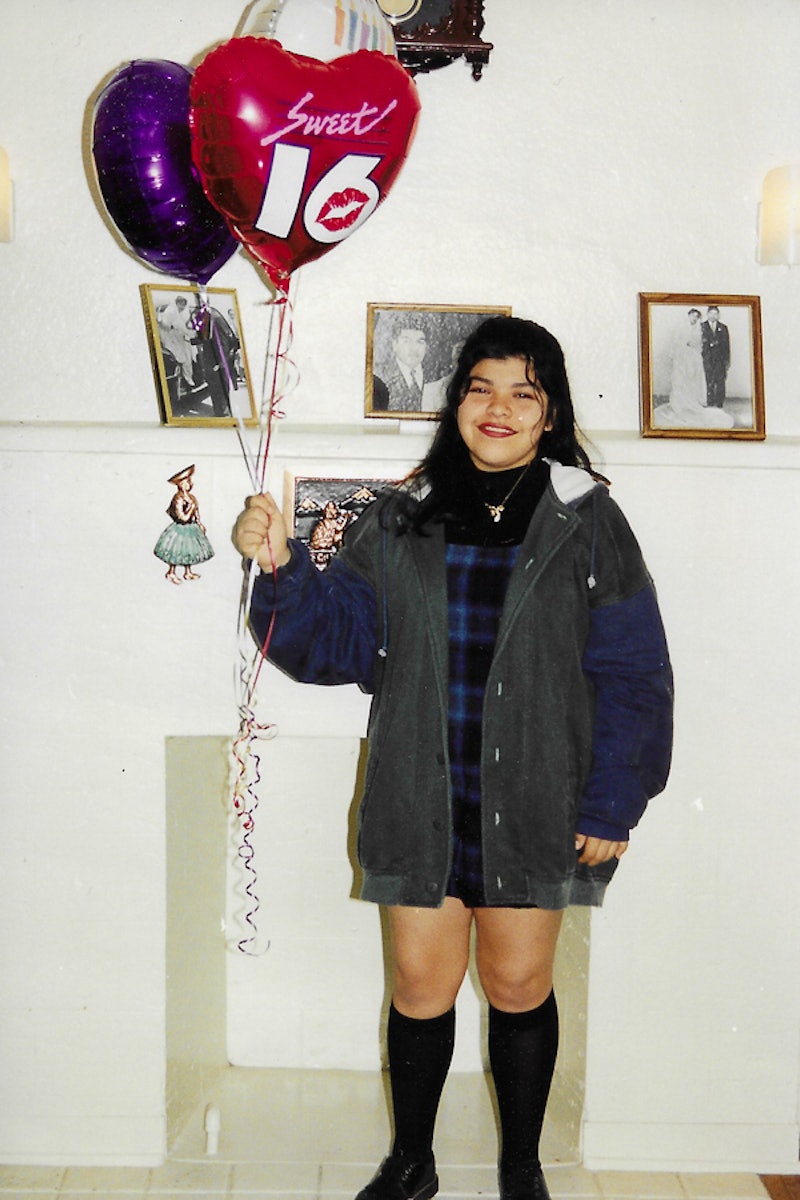 I still remember the first time I watched Real Women Have Curves. I was 24, and had been living on the other side of the country, for four years at that point. I had friends and a boyfriend, and was going to school while working at a Blockbuster right down the street from my apartment. One of the employee perks was that we could rent five titles a week, and I used that perk to the fullest possible extent. One night, when I was scanning the latest shipments into our computer inventory, I opened a box and saw a young Latinx woman with my body shape, on the cover of a DVD, staring right back at me. I was immediately drawn to it and without even reading the back of the DVD to see what the movie was about, I set it aside to take home with me that night.

A few days later, as I sat alone in my little apartment in a suburb of Philadelphia, 3000 miles away from my family in Los Angeles — I don’t really remember why, but I knew I wanted to watch it alone — I put on the DVD and in less than three minutes, I started to cry. That first scene of Real Women Have Curves, when Ana (America Ferrera) and her mom (Lupe Ontiveros) squabble over making breakfast, I knew that scene by heart. As I watched them argue, I could hear my mom’s voice in my head: “Yoli! Make your sister breakfast... Yoli! Help your little brother get ready... Yoli! You better come home after school — I need your help!” And it didn’t end there. Over the next 83 minutes, a flood of emotions flowed through me as I watched my hometown, my family, and my relationship with my mother — as well as my relationship to my weight, my body and my culture — in a way I hadn’t ever seen before.

I knew it was coming from a place of fear. Fear that we would be ostracized... because of her accent, her unusual last name, her immigrant family with the odd llama and tumi decorations all over their home.

Real Women Have Curves was more than just a representation of my culture, even though that in itself was huge. To me, it also grasped what it meant to be the daughter of an immigrant, stuck in the world between classic Latinx traditions and the modern American society I had grown up in. I remember being a teenager and being faced with a double standard every day. My mom was a single mom of three, she worked hard so we never went without. She taught us to be strong, and, in her own words, “Never take sh*t from a man.” And yet, because she was a young mom, she was also extremely cautious and strict with my sister and I, less so with my brother, who was almost nine years younger than me. While my sister and I would never be allowed to go to our friend’s houses (“You’re a girl, anything can happen to you!”), my brother had free reign to go and do as he pleased at a very young age (“He’s a boy, it’s different.”)

At times, I knew it’s because she was raised to lead a household, to “be a lady” and to cook and clean and care for her kids. My mother was much like Ana’s mom in Real Women Have Curves — and others — and I knew it was coming from a place of fear. Fear that we would be ostracized as she had once been; because of her accent, her unusual last name, her immigrant family with the odd llama and tumi decorations all over their home, and most importantly, because she was a woman whose value and worth were determined by whether or not she could attract a man, and care for him and “his” home, thanks to traditional ways of thinking.

Much like Ana in the film, my nickname my entire life, even now in adulthood, is “gorda” or “gordita" They are terms of endearment but basically mean "fat" or "my little fat girl." While I wasn’t forced into any diets, workouts or weight loss trends, and the food in our home was plentiful, every so often I would get a “You should watch your weight, mamita” comment. To an outsider, they sound like cruel comments, but as most Latinx women my age know, it was typically said with love, though not without consequence. It took me years to like my body as it was, to not consistently try different fad diets or weird starvation rituals, which were always met by my family with, “Are you sick? You lost too much weight! Are you eating?”

I know it frustrated my mom because she struggled to understand my American feminist point of view.

Much like Ana, I am a feminist and always challenge the concept of what my family believed would be my value as a woman. Somedays, I know it frustrated my mom because she struggled to understand my American feminist point of view, but most days, I think she enjoyed my arguments. To this day she reminds me of my response when she would tell me I needed to learn how to cook and clean because my future husband would expect me to, just as my grandmother did for my grandfather, and she did for my stepfather. “Why shouldn’t a guy learn to cook and clean for me?” she tells me I would say. “I shouldn’t be expected to do anything more than he does.” When she tells me this, she laughs before she adds, “So what is my favorite son-in-law making for dinner tonight?”

“Lomo Saltado,” which happens to be my favorite Peruvian dish made of steak, fries, herbs and veggies. “I taught him how to make it just the way you taught me.”

More like this
Jodie Turner-Smith & Joshua Jackson's Relationship Timeline Includes Her Proposing
By Jake Viswanath
Keke Palmer Paid Tribute To "Other Half" Darius Daulton After Announcing Pregnancy
By Jake Viswanath
J.Lo Wants To Make A Sequel To This Movie With Ben Affleck
By Jake Viswanath
Sarah Michelle Gellar & Freddie Prinze Jr’s First Date Was Unexpected
By Maxine Harrison
Get Even More From Bustle — Sign Up For The Newsletter