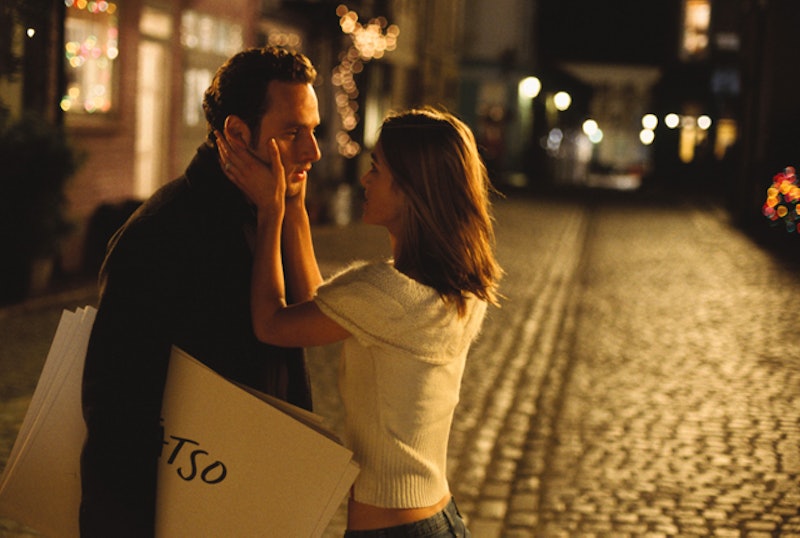 Romantic comedies can be sweet and funny to watch, but they can also be pretty idealistic when it comes to portraying love and relationship. Case in point: The dating app Sapio recently launched a study examining how the film industry's depiction of love differs from real life, and let's just say the movies don't exactly tell it is like it is.

Sapio started their examination by analyzing the 150 top-grossing romantic comedies of all time, specifically at plot devices involving romantic clichés. To compare, the company then surveyed 1,000 Americans about their own personal experiences with love. The final results shed some interesting insight most peoples' feelings about relationships and whether movies in this genre can influence them.

It goes without saying that romantic comedies are packed with predictable romance-themed tropes, like the "love switch" (in which a character starts the movie attracted to one person and ends up with someone else) and the "false identity” (in which one of the characters lies about their true identity or intentions). But how does this compare to real life? It turns out there are some pretty big discrepancies in the way romantic clichés are experienced in the real world as opposed to those in movies.

Some of the biggest differences? According to Sapio's study, while 30 percent of the examined movies featured an "unlikely pairing" (in which a character dates someone unexpected), it turns out that's even more common in real life. In fact, 66 percent of survey respondents report having been in a relationship with someone who isn't an obvious match. Wow… it seems opposites really do attract.

Meanwhile, only six percent of the rom-coms feature a story of unrequited love, in which a character's romantic feelings aren't returned. Unfortunately, according to Sapio, that scenario happens a lot more often in the real world. A whopping 78 percent of the survey participants said that they've once loved someone who did not love them back, proving that, contrary to what the movies say, some things aren't meant to be.

But perhaps the biggest discrepancy uncovered in the study has to do with online dating. Only one of the 150 examined rom-coms featured a relationship that started on the web. Obviously, dating apps and other online dating services are much more prevalent outside the big screen: More than a third of the survey respondents have gone on a date with someone they met digitally.

While there are clearly some pretty major disconnects between film and real-life relationships, that doesn't mean you can't enjoy a good rom-com now and then. Grab your popcorn and laugh (or cry) it up — just remember what you're watching isn't exactly realistic, so there's no use in attempting to replicate it or taking it too seriously.