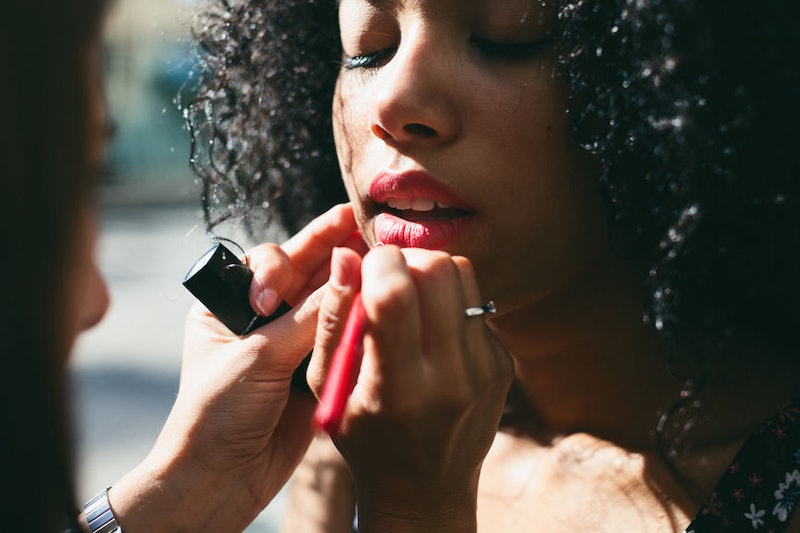 In the latter part of 2018, I was rebounding from a series of career rejections, delays, and upheavals. My self-belief was being tested considerably. Still, I clawed my way into 2019 determined to work hard, regain my confidence, and push towards the success I knew was waiting for me. Instead, I began the new year under what felt like a pile of rubble. Only very recently have I begun to figure out how to pull myself back up to the surface, and the most unlikely tool started my journey back to happiness: a bright red lip.

The major blow came when a conversation with my husband swelled into a force of catastrophic, seismic activity. My marriage — the one thing that I was sure of — crumbled and fell apart in what seemed like an instant. I felt weighed down by shock, grief, anger, insecurity, and emptiness for months.

As one would expect during a life-altering experience, I’ve been stuck in a cycle of depression and rage. My brain shifted immediately into survival mode, where my energy was spent primarily on ensuring that our two daughters (almost five and two years old) were OK, and hopefully unaware of the turmoil swirling between their father and I. I fell into the common practice of not really giving much of a damn about what I looked like at first. If I took a shower, that was a win for that day. I was losing sight of who I was and what I had to offer the world, so what did my appearance matter?

But as a freelancer, work had to continue. Writing allowed me to be a recluse, and I didn't have to interact with many people face-to-face. However, things differed when it came to my busy public speaking career, I had to look put-together. There would be no hiding out at home or choosing not to shower in those instances.

Despite makeup always being a source of fun and expression for me, it started to serve a different purpose in my life, it became a part of my survival. I often wondered if people could actually see my sad eyes or my fake smile beneath the eyeshadow, lashes, and lip gloss, but even on days where I surely thought someone would pull me aside and say “Hey, everything OK?” no one did. My mask did its job.

One day, though, things shifted in terms of my makeup routine. My girls started singing one of their favorite songs, “Happier” by Marshmello ft. Bastille, and my eldest made sure to dedicate the lyrics “I want you to be happier” to me. That day I only had a grocery store run on the schedule, but as I pulled on my go-to sweatpants I asked myself, “What can you do in this moment that will make you happier?” I didn’t have one stitch of makeup on, but spotted one of my favorite red lippies languishing in the bottom of my purse: Stunna Lip Paint in Uncensored by Fenty Beauty. I pulled it out and put it on, fully acknowledging that my “bare face, red lip” combo probably would never look as good as it does on Tracee Ellis Ross, but here I was. The burst of red was electric, and whether it was the power of the pop of red or simply divine timing, where I was ready to get back to feeling like myself, I started to find Bee again that day.

Color psychology tells us that red represents passion and desire just as much as it does fury and danger. It stimulates and excites us, raising our pulse and respiration rates. Red calls us to action, and that’s a reminder I needed in my life. For me, the color acts as a friend pushing me out into the spotlight when I've been lurking in the shadows for too long. With so much feeling utterly out of my control, a red lip was a simple act of doing something. It was me reminding myself to feel the fury and to keep putting one foot in front of the other, even though my destination was unknown. I still don’t know exactly where I’m going, but I know how I want to feel when I get there — and I get a taste of that feeling every time I step out with a bright red lip.

I now wear a red lip at least a couple of times a week, and it has brought me back to my enjoyment of makeup, rather than just using it to hide my emotions. While I generally leave makeup for my public life, I also enjoy playing around with new shades and techniques at home. I use application time as an opportunity to literally face myself and relearn how to love the person in front of me. Being in the depths of grief, depression, and insecurity can do a real number on you, and it’s never more apparent than when you have a fleeting moment of revelation that, yes indeed, you actually do like your face and who you are. I'm able to zone out, mindlessly following my routine for base, eyes, and lips, and pull off a look that makes me appear more confident and more together than I might feel inside.

I’m still in the murky waters of what life was, what it is now, and what it will be in the future, but I’m proud to share that I’m slowly pulling myself out of the rubble. Rays of sunlight are meeting me in my darkest place, reminding me that the sun still rises. Soon there will come a day where I’ll fully emerge from the dust with my face to that same sun, ready for the blessings of the new and unknown, as my lips are adorned with that bright red shade.

More like this
Emily Ratajkowski Believes You Should, In Fact, Get Bangs
By Rachel Lapidos
How To Get “Glazed Donut Nails” At Home
By Audrey Noble
Pat McGrath On Her New Star Wars Collection & “Alien-gelic” Skin
By Erin Stovall
The 8 Best Beauty Looks At The 2022 People’s Choice Awards
By Audrey Noble
Get Even More From Bustle — Sign Up For The Newsletter