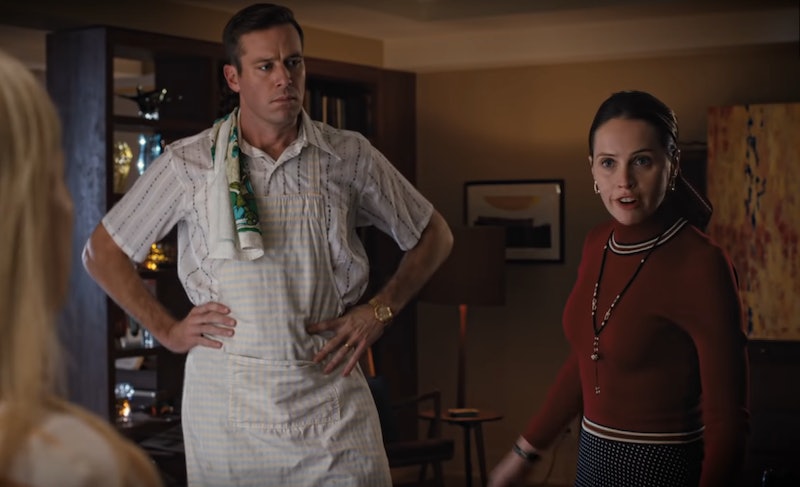 Writing a film about a Supreme Court justice with the Supreme Court justice herself is intense — even if the person in question is your aunt. Daniel Stiepleman, the writer of On the Basis of Sex, is Ruth Bader Ginsburg's nephew — his mom is Ginsburg's late husband Martin Ginsburg's sister. He worked with his aunt on the details of the story, and, being that she's the Ruth Bader Ginsburg, getting the facts straight was very important to her.

"She would point out everything," Stiepleman tells me over the phone. "Her attitude was, if you're going to make a portrait, make it an accurate portrait."

Stiepleman's goal was to not just tell Ginsburg's story, but the story of Ginsburg and Martin's partnership. He came up with the idea at an unexpected moment.

"For me this started in 2010 at my uncle [Martin's] funeral," he says. "I first heard the story when a friend of his gave this lovely eulogy, and she briefly mentioned the only case that Ruth and Marty ever argued together." This was Moritz v. Commissioner of Internal Revenue, which is the case featured in the film. According to Stiepleman, Martin, who worked in tax law, said that it was "the most important thing he'd ever done because it allowed [Ginsburg] to do what she had done."

There's also the fact that Ginsburg and Martin had always been role models for Stiepleman and his wife in their marriage, because of how equal their relationship was. "We very consciously said we want to be like Ruth and Marty, and so it just felt like it was the best story to tell," he says. "Except then I realized I was at my uncle's funeral. What kind of *sshole is sitting at his uncle's funeral mining his life for material?"

Stiepleman put off writing the story for a year, then finally decided to ask Ginsburg for her permission. "Her first reaction was, 'Why that case?' She said, 'I argued bigger cases. I argued cases in front of the Supreme Court.'" He explained that it was because this was an early case and the one she and Martin had argued together. "Then she got it, and her very enthusiastic response was, 'Well, if thats how you want to spend your time,'" he says.

They would go on to spend some of that time together. "The first part of my process was research, which was all sitting with her," Stiepleman says. "By night, we would talk about the marriage and raising kids and [she and Martin] building this life together. And by day, I was combing through her files at the library of congress from the '60s and '70s."

When Ginsburg got the first draft of the screenplay she "read through it like it was a contract," Stiepleman says with a laugh. "'OK. Page one, here in the first sentence you have me wearing high heels. You know, I used to walk to Harvard, so I didn't usually wear heels.' It's like, this is how this is going to be? OK, let's get to work."

"This huge auditorium of people all rose to their feet screaming like she was Mick Jagger. And I'm like, that's my 85-year-old aunt, what are you doing?"

Stiepleman says that, unsurprisingly, his aunt is a stickler for detail, but "what was important to her was that the law was right and the way the law is practiced is right and that Uncle Martin is right." She understood, though, that some things had to be done in a certain way, because of it being a film. "Luckily, she's a movie lover, but heaven forbid I wrote 'Equal Protection Clause' where I meant 'Equal Protection Principle', and I would get a history of the U.S. Constitution."

Spoiler ahead! Being a movie lover also meant Ginsburg was willing to appear at the end of the movie, which was director Mimi Leder's idea. "I was like, 'But if you shoot it, please don't cut it out of the movie, because I don't want to have to be the one to call her and tell her she's been cut out of her own life story,'" Stiepleman says. Thankfully, that didn't happen.

As far as the actor who would play her in film, Stiepleman explains, "We would let [Ginsburg] know what we were thinking about and sort of gauge her reaction just out of respect." She was on board for Felicity Jones. "She loved the idea of Felicity. She was already a fan from The Theory of Everything," he says.

Obviously, Ginsburg is incredibly popular right now as evidenced by the "Notorious RBG" T-shirts and that fact that not one, but two films about her have been released this year. Stiepleman hopes his movie humanizes the icon.

"I was at a conference where she spoke a few months ago, and she walked on the stage and this huge auditorium of people all rose to their feet screaming like she was Mick Jagger," Stiepleman says. "And I'm like, that's my 85-year-old aunt, what are you doing?"

While he admits that "on the one hand it's pretty fun," he doesn't want Ginsburg to be too much of a superhero. "The thing about superheroes is superheroes have super powers and the rest of us can't aspire to do what they do." He continues, "She started out as unsure of herself — or at least as unsure of her future — as any of us. None of it was inevitable. And so I hope the movie sort of humanizes her, because I find that more inspiring than the superhero version."

In the end, Stiepleman wants audiences to leave inspired in their lives and relationships and optimistic about how the world can be changed. It's a tall order, and he has Aunt Ruth's support in all of it.

More like this
At 28, Hilary Swank Was Prepping For 'Million Dollar Baby' & Hanging With Her Parrot
By Samantha Leach
Tove Lo Is Still Crying On The Dance Floor
By Ivana Rihter
Lauren Lyle Is Keeping The Contents Of Karen Pirie’s Bum Bag A Mystery
By El Hunt
Everything You Need To Know About The 'Knives Out' Sequel
By Bustle Editors
Get Even More From Bustle — Sign Up For The Newsletter