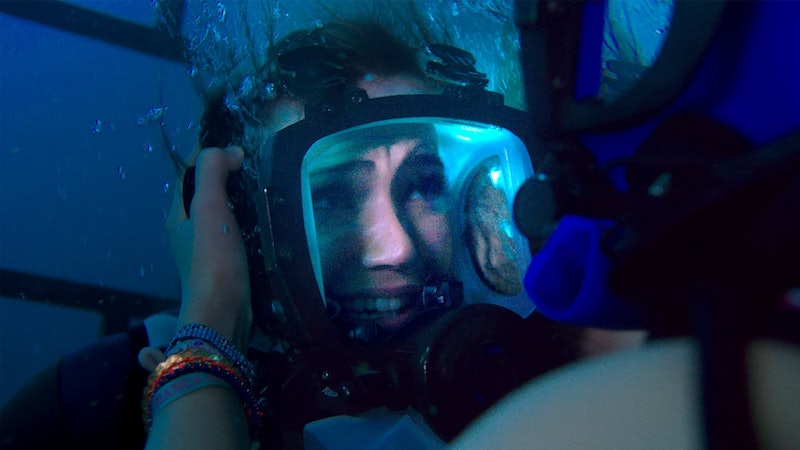 The word "blockbuster" gets thrown around a lot in relation to summer movies, whether those films have earned that distinction or not. But most agree the term first came into wide use in 1975 thanks to the massive summer hit Jaws. The movie, about a great white shark terrorizing a beachfront town one summer, installed a healthy fear of the marine predators that persists to this day. Sharks continue to be a popular antagonist for horror movies, with the latest example being 47 Meters Down. But how scary is 47 Meters Down?

The movie is something of a new take on the "shark in the water" genre. Rather than ripping off Jaws, the movie looks to use the terror of sharks in a new way — by putting its protagonists far under the surface of the ocean. 47 meters down, to be precise. The film stars Mandy Moore and Claire Holt as two sisters vacationing in Mexico who venture into the deep in a shark cage to observe some great whites. Sounds fun, right? Well, not really, as their fun proves short-lived after the cable to the surface breaks and the pair become trapped in the cage on the bottom of the sea, running out of air as the sharks circle them as their potential next meal.

The movie is by all definitions a horror movie, and all indications are that it's pretty scary. The film offers the typical fear and suspense that goes along with any shark attack movie, like Jaws or last summer's surprise hit The Shallows, in that it features scary sharks trying to eat people in the ocean. But the movie also adds a couple of new elements that elevate the level of terror on display.

For one, much of the action takes place inside a shark cage on the bottom of the ocean. This adds a serious conundrum for the protagonists. If they stay in the cage, they will run out of air and drown. If they exit the cage, then they run the risk of being eaten by swarming, hungry sharks. The cage and threat of running out of air adds a sense of isolation and claustrophobia that complements the constant threat and jump scares that come from the sharks.

With its combination of many different horror elements, centered around a antagonist that many people are naturally afraid of, 47 Meters Down might just be the scariest movie of the summer — so don't watch it if you plan on going to the beach any time soon.