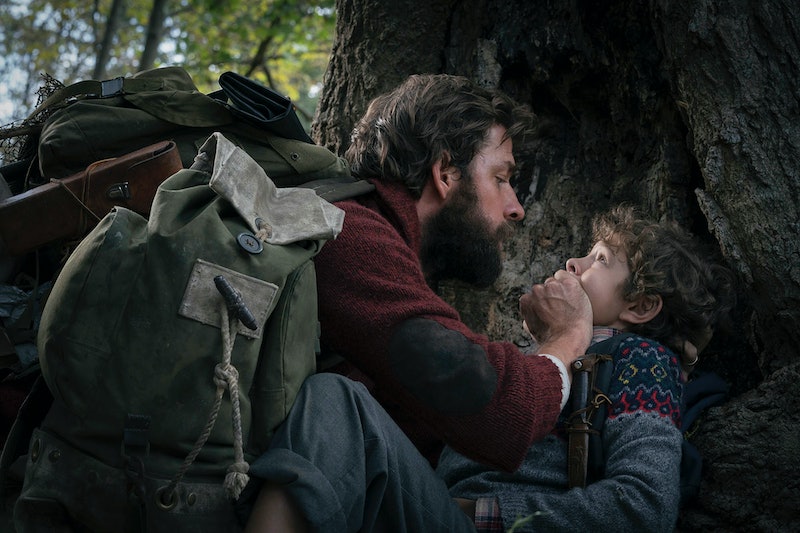 Emily Blunt and John Krasinski are one of Hollywood's most beloved real life couples, but the two hadn't appeared on screen in a film together until now. The husband and wife duo star in the new thriller A Quiet Place, which was also directed and co-written by Krasinski. And although fans are used to fawning over the couple's adorable public persona, the new movie puts them in a terrifying position as their family is hunted by a supernatural force. But how scary is A Quiet Place?

By all indications, A Quiet Place is a very frightening — and innovative — horror movie. In the film, Krasinski and Blunt portray parents Lee and Evelyn Abbott. They currently have two children: their son Noah and deaf daughter Regan, and Evelyn is pregnant with a third. But although they appear to be a perfectly fine and normal family, their lives are anything but. They live in a rural farm in a post-apocalyptic world, one overrun by vicious carnivorous creatures. The creatures hunt by sound, meaning that to survive, you have to stay absolutely silent. Anyone who's been around kids knows that it's not easy to keep a family with young children silent, meaning that the characters in the film have to always be on their toes to make sure they're not making any noise whatsoever. If they do, the creatures will hear them and kill them.

The movie's unique use of silence makes it stand out among other horror films and offers an added sense of tension to the genre, and it had some interesting influences. The story is meant to be an allegory for parenting, as the Abbotts try their hardest to keep their kids safe, and was partly inspired by Krasinski's own children with Blunt and his desire to protect them. "We just had our second daughter about three weeks before I read the script, and so I was already in the state of terror of keeping this girl safe, keeping this girl alive, and whether or not I was a good enough father to be her father," the actor and director told students at Indiana University, according to Indiana Daily Student. "In comes this script about a family that relies on each other, about parents that would do absolutely anything for their kids ... What I wanted to do is further that. So when I asked to do the rewrite, I really wanted to drill down on all that family stuff and make every single part of the movie come back to being a family."

Krasinski was also influenced by classic horror films, particularly those that played up suspense such as the films of Alfred Hitchcock, Alien, and especially Jaws. "I remember Jaws was one of the first movies Emily and I watched together," Krasinski told IGN. "What's weird about that is that while both of us don't like to be scared, there's something cool about watching a movie you think is a scary movie but it's really something else entirely. The more you watch Jaws and the more you pay attention, it's one of the best-written films ever with one of the best set-ups ever for exploring people's plight. Really the movie's about three men dealing with their own fears and what they want to accomplish in their lives and the shark is this backdrop. There's something powerful about that idea that I hoped to bring to this movie."

A Quiet Place is really about two people trying to protect their family in a dangerous world; a relatable set up made all the more terrifying by the addition of terrifying creatures that will disembowel you if you make a sound.