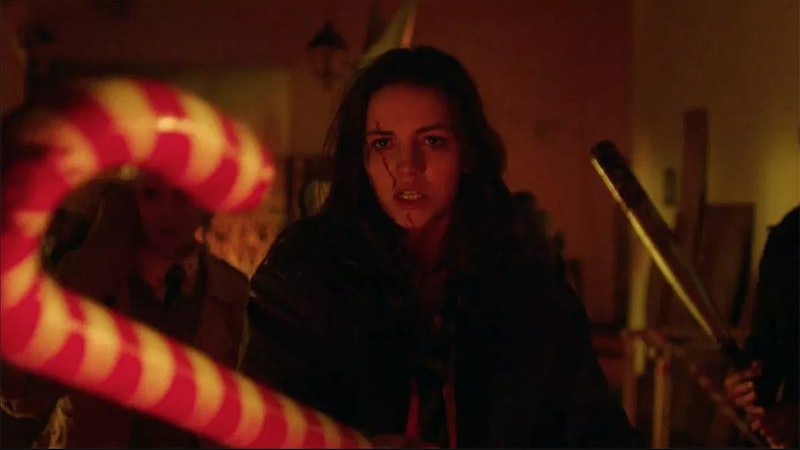 Musicals centered around the holidays just make sense — Christmas is the ultimate theater kid time of year, with outlandish decor, rampant singing, prancing encouraged, and glittering lights abounding. The holiday also attracted a fair share of horror to cut through the holly jolliness, with films like Silent Night, Deadly Night, Black Christmas, and Don't Open 'Til Christmas putting the slay in sleigh bells. Zombie musical Anna And The Apocalypse perfectly splits the difference, adding some tingle to the tinsel with a song-filled spectacle of high schoolers trying to survive. But exactly how scary is Anna And The Apocalypse, out Nov. 30? If a little gore won't put you off your figgy pudding, this might be the film for you. Mild spoilers ahead.

The film's first half hour is completely monster free, setting up the lives and dramas of suburban Little Haven residents. Anna's almost a prototypical Disney princess, dreaming (and singing) of bigger things beyond the small-town life she's known and loved. She's just ditched smug jock boyfriend Nick, doesn't realize her best friend John is in love with her, and is disappointing her working-class dad by not immediately heading off to college.

In a scene similar to Shaun Of The Dead's clueless lead going through his daily routine ignorant of the world burning around them, Anna and John sing their way to school in headphones, clueless of the violent zombie outbreak tearing their neighborhood (and neighbors) apart — the graphic gore contrasting the cheery decorated lawns and Anna's joyful song. The violence is played as cartoonish — a typical example is a zombie in a snowman outfit, the cheery suit offsetting the dead-eyed creature within trying to kill Anna and her friend. When they manage to dispatch it, there's a fountain of arterial blood spraying, so much so that it's impossible to take seriously.

Still, part of Anna And The Apocalypse's genius is getting the viewer as invested in its characters' lives before having some of them torn apart by the undead. The holiday season and zombie situation make everything happening more high-stakes and losses are a lot more permanent, but at its heart this is a film about friends, family, and who you can truly rely on. Holidays are about family, and teen years are about learning to grow up and let go; combine the two and there's plenty of tension between loved ones wanting the best for those they care about and young people striving to forge their own path. Tossing in some limb-ripping monsters adds gore, but the pathos of the situation adds true feeling — you care about who gets their throat ripped out.

And here's the real secret: though the film mines plenty of humor from the seeming incongruity of bloody horror and upbeat musicals, both genres allow and emphasize existing emotions — they just push them to outsize limits. And while horror usually focuses on extremes of physical fear, there's plenty of overlap. How many musical numbers can you think of expressing anger, sadness, grief, and self-doubt? Les Mis's musical take on the brutality of the French Revolution hits people harder with its impassioned expression than a dry reading of historical statistics, so it makes sense a musical number could handle the horror of being thrust into a situation where friends and family are killed and turned against you.