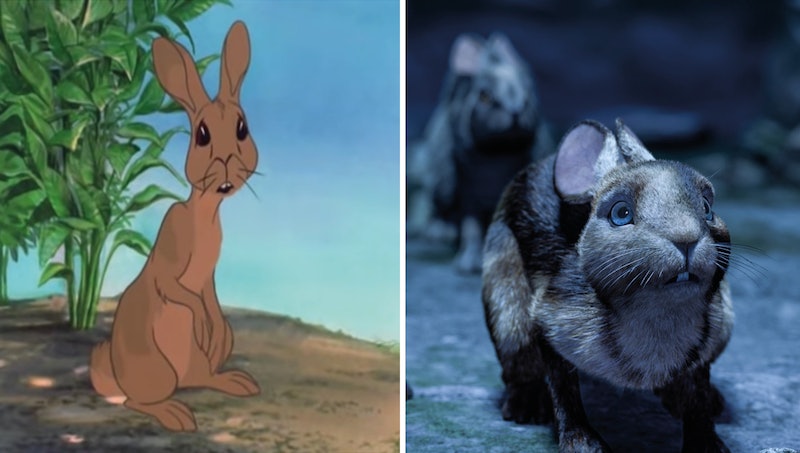 If you watched the original version of Watership Down, you've probably been scarred for life thanks to its gory realism in cartoon form. But with a remake set to appear on TV screens over the Christmas period, it's only natural to wonder how scary the BBC's Watership Down adaptation will be. Luckily, I have some good news for you.

At first glance, an animation about rabbits sounds like the most child-friendly TV programme in the world. But Watership Down is based on a bestselling novel written by author Richard Adams in 1972. As the Guardian reports, the tale was originally told to his two daughters during a particularly long car journey and depicted the trials and tribulations of being an animal in today's world.

Although Adams, who passed away in 2016, denied that the story had a deeper meaning, its brutal violence terrified both children and adults and allowed many to liken it to several historical atrocities. The plot follows a young rabbit called Fiver (voiced by Nicholas Hoult in the BBC version) who, after experiencing a vision of the imminent destruction of his home, takes a group of rabbits, including his brother Hazel (James McAvoy) to try and find a safe haven.

The adorable rabbits experience several nightmare situations on the way. The original 1978 film showed a rabbit graphically choking in a snare, rabbits being gassed in their own warrens, brutal depictions of the food chain, and the horrifying General Woundwort ripping a fellow rabbit's throat out.

But the new remake, which is a partnership between the BBC and Netflix, promises to be a lot less violent. Executive producer Rory Aiken told the Telegraph in 2016 that "it's not a terrifying brutal story. I think that in a way we want to restore the reputation that the book should have as one of the great adventure stories of all time.

"While we won't shy away from the darkness in the book, visually it won't be as brutal and scarring. The idea is to bring it to a wider family audience. While Watership Down is never going to be for young children, it will be for the whole family to watch together."

The timing of the two-part series also suggests that there will be no graphic violence. Both parts will air at 7 p.m. and 7:20 p.m. respectively which is way before the BBC's 9 p.m. watershed.

The BBC states that any programme shown before this time "should be suitable for a general audience including children. The earlier in the evening a programme is placed, the more suitable it is likely to be for children to watch on their own." The guidelines also advise broadcasters to be careful about displaying scenes of strong language and explicit violence and sex before this time.

If children can handle it, us adults definitely can, right? Right? I for one am still not looking forward to watching the death of rabbits but I am excited to hear the voices of such a stellar cast. As well as Hoult and McAvoy, some of the UK's top actors have lent their talent to the series. Names include John Boyega, Olivia Colman, Sir Ben Kingsley, Gemma Arterton, Peter Capaldi, Daniel Kaluuya, Rosamund Pike, and Gemma Chan.

The first part of Watership Down will air on BBC One on December 22 at 7 p.m followed by the second half on December 23 at 7:20 p.m.