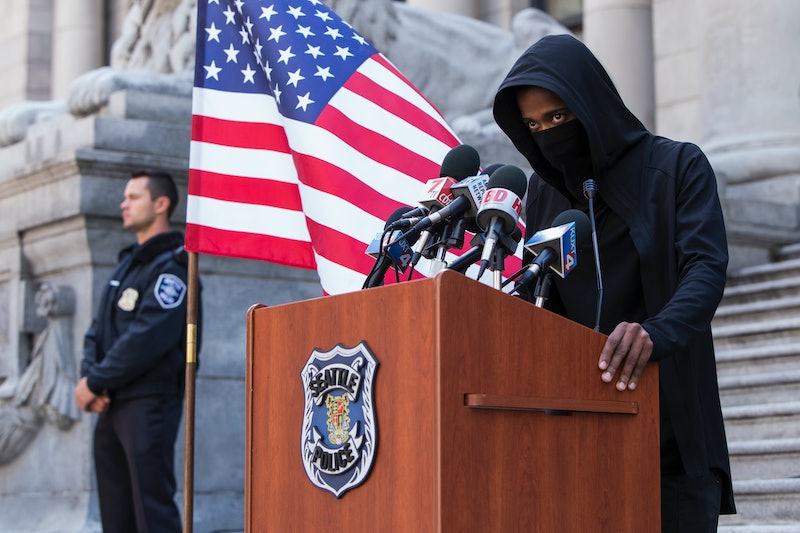 Death Note, Netflix's newest original film, is adapted from a Japanese manga-turned-anime. And spoiler alert (if the title wasn't enough to tip you off), it's got a lot of death in it. While most mere mortals consider death to be pretty frightening, it's not always enough to make a movie actually terrifying. How scary Death Note is isn't actually proportional to the amount of death in it, but, don't worry, it's still a pretty good indicator.

Fans of the original manga and anime might be surprised to find out that Death Note actually does feature quite a bit of gore. It's one of the major differences between the source material and this new version. If you're not into seeing people die bloody deaths, then some scenes in Death Note will be difficult to watch, but believe me when I tell you that death is really the least of your worries.

What makes Death Note so scary isn't necessarily the horror of death (and some of the deaths in the movie are truly quite horrible), but the willingness with which the film's main characters want to commit murder. The movie follows Light Turner (Nat Wolff), a smart, but isolated teenager who finds himself with the Death Note which, as explained by a creepy but not all too scary demon named Ryuk (Willem Dafoe), is a magical notebook. The owner can write in any name they want and specify how and when they die, and it will come true. Long story short, Light is intoxicated with the power of the Death Note and becomes a mass murderer, attracting the attention of an unorthodox detective L (Lakeith Stanfield).

The heart of Death Note isn't really in the blood and guts, which are commonly associated with scary movies these days (think Purge or Saw). If anything, the movie is more of a psychological thriller, and that's by design. "I wouldn't say the movie is really scary; it's more of a game of cat and mouse between L and Light," said director Adam Wingard at Comic Con, via Polygon. The psychological games played by L and Light are, indeed, thrilling, but what's really scary is how easily a teenager becomes a mass murderer. And by scary, I mean "keep you up at night wondering if you could have been seduced by a magical notebook" scary.

Moreover, the real fear that emerges from the film is the worry that any ordinary teenager can be seduced by the idea of mass murder. It's a fear that has proven all too real by the various incidents of young students, inspired by Death Note, to create Death Notes of their own. In 2015, a school in New Hampshire had to do damage control after a female student's Death Note was discovered. The Note contained a list of names of 17 students that she supposedly fantasized of killing via-Death Note, according to a report form The Daily Dot. If that's not enough to scare you, I don't know what is.

Obviously, Death Note is not going to actually turn anyone into a serial killer. (There was no evidence that said student in New Hampshire ever directly threatened anyone with violence or planned on acting on her Note.) However, should you find yourself being inspired by Death Note instead of scared by it, you might need to phone a friend.

More like this
This 'Hunger Games' Alum Will Star In A New Medical Drama Titled 'A Mistake'
By Alyssa Lapid
One Powerful Quote In 'Doctor Strange 2' Is Going Viral On Twitter
By Alyssa Lapid
Watch The Dramatic First Trailer For Netflix's Jennifer Lopez Documentary
By Alyssa Lapid
What’s New On Netflix: A Victoria Justice Rom-Com & The Return Of David Letterman
By Arya Roshanian
Get Even More From Bustle — Sign Up For The Newsletter