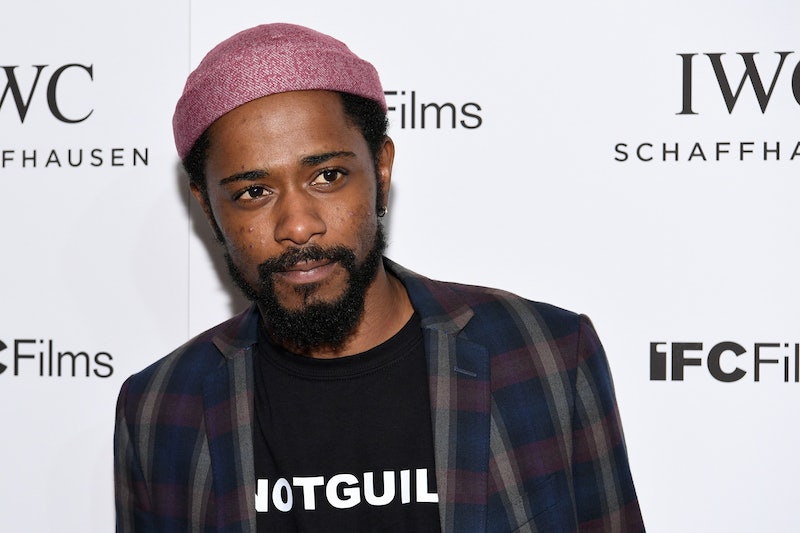 A few days before meeting with Bustle to discuss his new film Crown Heights, Lakeith Stanfield had a run-in with the law. The actor, who recently rose to fame with supporting roles in Atlanta and Get Out, had just bought a new car, and his license plates had yet to arrive. "I got pulled over and the guy asked me to get my license and registration. I go to reach for it; dude starts getting fidgety," Stanfield says. Luckily, he left the situation unscathed, but he is all too aware that things could have gone very differently. "That could have been a close call that night," he says. "I could have been out of here just from that one night, and it’s a real concern."

In Crown Heights, out Aug. 25, Stanfield's character isn't so lucky. The film tells the true story of Colin Warner, an 18-year-old living in the movie's titular Brooklyn neighborhood when he was arrested in 1980 and charged with the murder of a man he had never met. Witnesses, intimidated by white policemen, placed him at the scene, and he was convicted despite the lack of any physical evidence. Warner was sentenced to 15 years to life in prison, and spent 21 years behind bars before his conviction was overturned.

As Stanfield notes, the character's disturbing story is sadly not unique, but a reminder of how much institutional racism has instilled fear of black people in law enforcement. “There is an assumed criminality that accompanies [dark] skin," the actor explains. "And sometimes just being a black male, you don’t stand a chance with it.”

Stanfield, who met Warner prior to filming, hopes that Crown Heights will help spark a conversation "surrounding the astounding number of people in prison in America." The actor cites mass incarceration and harsh drug laws as part of the problem, saying, "I think we could definitely talk more about that and hold our administration and our law enforcement to higher standards. And I don’t care what anybody says, they need to be held to higher standards, better standards, and we need to push them there."

Crown Heights isn't the first summer movie that could spark such a discussion. August's Detroit similarly tackled themes of police abuse and the criminalization of black bodies, but the discourse around it focused less on police brutality and racial profiling and more on whether or not white filmmakers (Kathryn Bigelow in the case of Detroit) should make such a film. Crown Heights, written and directed by Matt Ruskin, a white man, could find itself facing similar criticisms, but Stanfield isn't too worried. "The idea that because a director’s white means that they can’t tell a story that takes place in a black neighborhood or in a black situation, I think that’s silly," he says.

Stanfield clearly isn't afraid of a little controversy. In fact, he embraces it. "I’m not interested in living in a safe career. I want to do things that challenge me and I know I’m gonna f*ck up," he says. Beyond Crown Heights and his new Netflix original movie Death Note, out Aug. 25, not only does he have the second season of Atlanta and a handful of movies lined up, he also has hopes of one day starring in a big fantasy film. "I just want to continue to challenge myself and do bigger and better things, I think it’s worth it," the actor says. "I want to experience everything, but I know that means it’s going to be scary, it’s going to be hard."

Whatever lies ahead for Stanfield, it's certain that it will be unexpected and unpredictable. "I’m just kind of just going down the road, not knowing where it leads," he says. "Kind of like waves at night, just rolling. I don’t really know where it’s going, but wherever it goes, I’m on the ride.” As are audiences everywhere.

More like this
At 28, Minnie Driver’s Personal Life Was “Falling Apart”
By Kate Dwyer
'Derry Girls' Creator Teases Exciting Spin-Off Starring These Three Characters
By Olivia-Anne Cleary
Becky G Once Had A Fear Of Speaking Spanish. Now She's Topping The Latin Charts.
By Tess Garcia
Playing A Scrub Nurse On 'Grey’s Anatomy' Made BokHee An Instagram Royalty
By Brad Witter
Get Even More From Bustle — Sign Up For The Newsletter