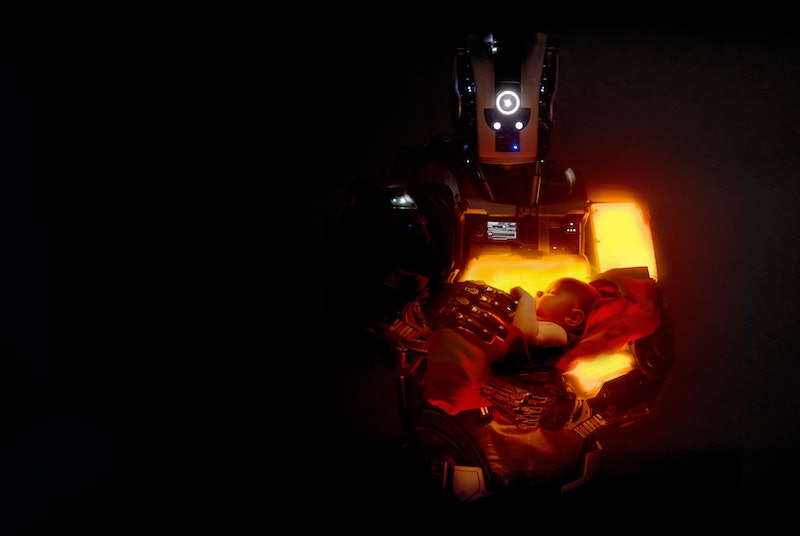 Netflix might want to take a lesson from their own sci-fi thriller I Am Mother: artificial intelligence and algorithmic logic shouldn't be blindly relied on. In the film, streaming now, Daughter (Clara Rugaard) has lived her entire life in a sealed bunker, raised by robotic AI Mother (voiced by Rose Byrne). When another human (Hilary Swank) shows up, it throws Mother's version of the world into question as Daughter discovers her larger plan. For a film with only three characters in one setting, how scary is I Am Mother? While it's not intended to startle or horrify, the Uncanny Valley's still an eerie place to exist.

I Am Mother is centered around questions that have come up since the dawn of the term "robot" back in 1920 (coming from the Slavic robota, meaning "servitude" or "forced labor"). Creating our own image in metal, we're forced to reflect on what defines humanity and where the line is drawn separating person and machine. In presenting a future world where all that remains of humanity are the robots and AI they created, the question's taken a step further in I Am Mother. Can a robot be sympathetic? How would a human raised with robotic values behave? Can a robot program a human, why, and what would that look like?

Talking to Variety, first time film director Grant Sputore made it clear he's not condemning gadgets and mechanization. “I’m not a ‘beware technology is Frankenstein’ kind of person. It’s clearly made all of our lives so much better. I just think we are entering new terrain where machines will likely be smarter than us and we should be mindful of that," he said. To that end, the film made a deliberate choice to give Mother the soothing voice of a human female, but a body modeled on Boston Dynamic's unsettling running robot Atlas and balance bot Spot, creating a character terrifyingly strong but shown gentle enough to cradle and raise a fragile baby. But what is Mother's ultimate aim?

Initially human-designed AI evolving on its own tangent doesn't have the scare of a slasher film, but unlike a masked killer, this horror's already inside your house. An article by the Baffler touting fun workarounds letting YouTube viewers peek at the website's unseen corners shines a light on how much GoogleBrain, the algorithm determining how much and what people watch, decides what we want more of. And when the goal is longer watch time, anything that accomplishes that becomes priority, including even extreme violence and hateful screeds.

Human biases don't disappear with hyper-intelligent networks. If anything, according to a Black Enterprise article on inherent racism in AI and data pools, they become emphasized in an awful feedback loop, even when original intentions were noble. Microsoft's Tay chatbot, built using "relevant public data," became a hate-spewing monster in under 24 hours, according to a Verge article pointing out it was just programed to mirror its Twitter surroundings.

So what of an AI tasked with "preserve humanity"? Mother is following her programming to the best of abilities, but Daughter and the woman who disrupts their experiment may find out that I Am Mother's solution is terrible as it is successful.