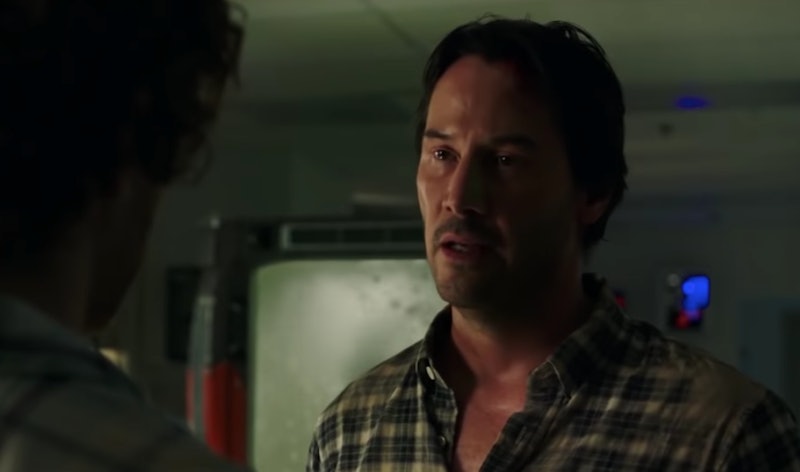 About 20 years after Keanu Reeves starred in one of the most acclaimed sci-fi movies ever, the actor is leading a new movie with a trailer that seems to suggest another glitch in the matrix. In Replicas, out Jan. 11, Reeves plays a neuroscientist named William Foster, whose family dies in a tragic car accident. William, playing god with science, brings his family back to life by cloning them. As if that's not bone-chilling enough, the grieving father's sci-fi mission takes a dark turn when the police attempt to stop William's experiment and a battle between robots and humans commences. Replicas is actually way scarier than you might expect, because William's sci-fi scheme goes horribly wrong.

If you're a fan of Black Mirror, you'll probably appreciate Replicas and its eerie brand of horror because the new Reeves movie has a somewhat foreboding element to it. With real-life cloning experiments well under way, Replicas serves as yet another example of Hollywood's dark portrayal of why modern science could bring the whole world down in some sort of Artificial Intelligence vs. Humans battle.

What sets Replicas apart from other freaky movies about AI, like Ex Machina, is the fact that the "robots" in the movie are treated just like humans, at least by William.

If you can handle spooky sci-fi movies that make you question the direction that technology could be heading in, then you'll probably enjoy Replicas, even if it is pretty scary. You'd be in good company if sci-fi movies are your favorite source of jump scares, because Reeves himself has previously spoken about how much he enjoys the genre.

While at 2017's New York Comic Con, Reeves spoke on a panel for Replicas, according to the blog Bleeding Cool. "I love Science Fiction – love the world building, love the way it can be a Trojan horse — all other genres can fit inside SF... And sometimes you get spaceships and aliens and, you know, cool stuff,” Reeves said at the 2017 panel.

It's hard to tell exactly what you'll get from Replicas, as viewers will probably have a hard time picking characters to root for. On one hand, William's dangerous experiment is dangerous and illegal, but on the other hand, he's motivated by grief and love after losing his family. Then there are the cyborg clones — are they good or bad? And what about the law enforcers who take extreme measures to attempt to stop Williams' family?

The ethical questions, along with the suspense, make Replicas a quintessential sci-fi movie, and director Jeffrey Nachmanoff explained to the same 2017 NYCC panel as Reeves before that he's in it for the ethical conundrum. "There’s a price to pay when you play with mother nature," Nachmanoff said, per Bleeding Cool.

With real-life news stories these days about cloning, including Barbra Streisand cloning her dog, Samantha, movies like Replicas might become scarier and scarier as they seem to become more realistic. If you're a thrill-seeker who loves sci-fi, though, the new Reeves movie seems like the flick for you.

More like this
Blake Lively's Reaction To Ryan Reynolds' Dance Video Was Pure Thirst
By Stephanie Topacio Long
You’ll Be Able To Stream Bullet Train Before The Holidays
By Arya Roshanian and Radhika Menon
How To Stream Knives Out 2: When Will Glass Onion Be On Netflix?
By Radhika Menon
'Avatar 2' Now Has A Teaser Trailer & Release Date
By Jack Irvin and Alyssa Lapid
Get Even More From Bustle — Sign Up For The Newsletter