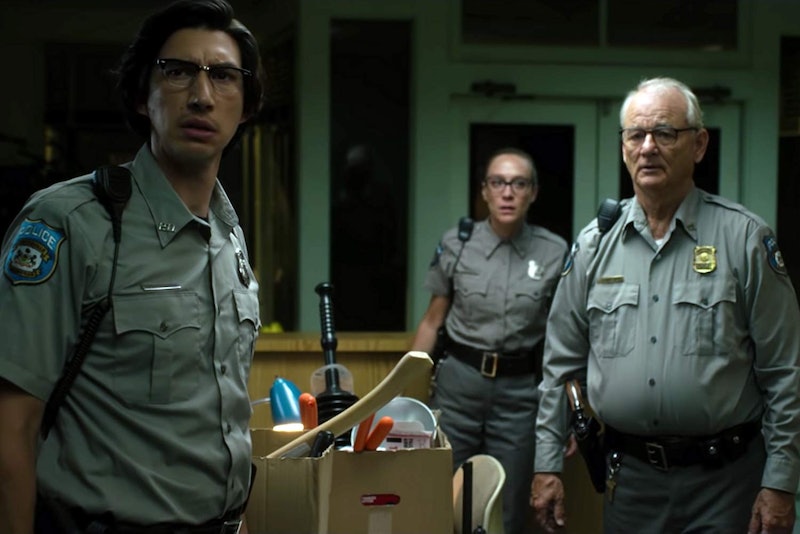 Zombie films have been around since 1932's White Zombie, but didn't become a major pillar of horror until 1968's Night of the Living Dead. But as the years have gone by, the dystopic sub-genre — and the nature of the ghoulish undead — has transformed. Some movies gave zombies upgrades, like the terrifying creatures in World War Z, while others have played with the idea of infusing humor and even a little romance. (See Warm Bodies.) The latest addition to the canon is The Dead Don't Die, a comedy opening June 14, which supplements the gore you expect from a zombie film with a hearty helping of meta commentary on the films themselves.

The story is set in the sleepy, fictional town of Centerville, where Police Chief Cliff Robertson (Bill Murray) and officers Ronnie Peterson (Adam Driver) and Mindy Morrison (Chloë Sevigny) investigate some strange goings-on. Once they realize that they — and the rest of the world — are in the middle of a zombie apocalypse possibly caused by fracking, they take to the front lines to defend their home. The star-studded cast also includes Danny Glover as a friendly old-timer, Steve Buscemi as a racist farmer, Selena Gomez as young city woman traveling through town, and Tilda Swinton as Centerville's strange new funeral home director.

The trailer, the movie poster, and even the very title should already tell you that The Dead Don't Die isn't a straightforward zombie flick. Yes, the rotting flesh of the zombies is still creepy and gross. And, yes, when the attacks happen, the scenes get pretty graphic. But filmmaker Jim Jarmusch's deadpan tone is carried throughout — note the indifference with which Driver and Murray's characters easily accept the dystopian situation in Centerville. No mass panic, no huge fuss.

Even the zombies in the movie's universe provide comic relief, as they crave things that remind them of their past life, like playing tennis, drinking coffee, or having a glass of chardonnay. (Look for Iggy Pop and Carol Kane in offbeat cameos.) And the kills in the film are sometimes played for slapstick fun. But even though the movie is more funny than it is freaky, it's not completely devoid of jump scares. There are a couple here and there, just to keep audiences on their toes. Even with that, the tone is less severe than that of the cult classic zombie comedy Shaun of the Dead — and that's saying a lot.

The Dead Don't Die is also very meta in that Driver's Officer Peterson, repeatedly tells his commanding officer that none of this is going to end well, as if he's seen the movie before. There's more to that element of this film, but to say too much would be to spoil it.

So as long as you're fine with a little gore and some light jump-scares, then The Dead Don't Die should be safe for you to watch. If you're still apprehensive, grab a good number of friends and see the flick together. It's not worth it to deny yourself the fun of watching Bill Murray slay some zombie scum on the big screen.