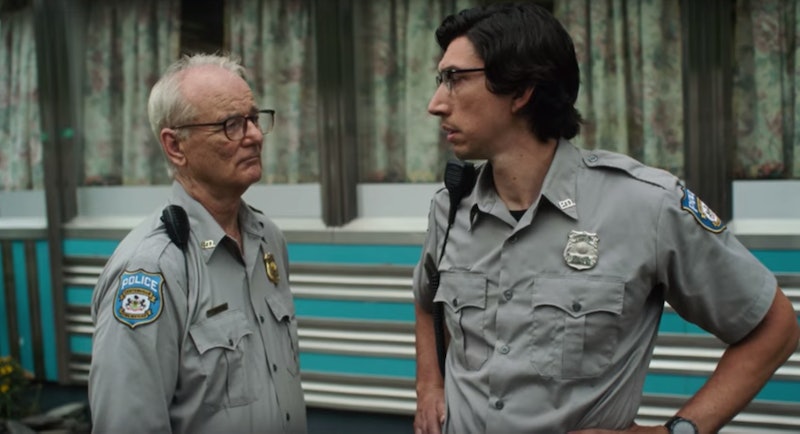 If the thought of watching a horror movie is enough to freak you out, The Dead Don't Die might be just your type of film. Bill Murray and Adam Driver's zombie movie, The Dead Don't Die has a trailer, and it looks absolutely absurd, zombies and all (How could it not be, with that unlikely duo at the helm of things?)

The trailer features Murray and Driver, along with Chloë Sevigny, as small-town police officers investigating what Driver's character, Ronald Peterson, describes as the work of "ghouls." Honestly, the trailer is worth watching for Driver's pronunciation of the word alone, which occurs at the 0:44 mark.

And while it does look like there will be some gore involved, it also looks like The Dead Don't Die will be pretty campy. Based on the trailer, combined with the title font and the ridiculous tagline — "the greatest zombie cast ever disassembled" — The Dead Don't Die looks more like Shaun of the Dead than an actual horror movie. There's upbeat music, for one thing. And the zombies seem almost more interested in reliving their own lives — including drinking coffee and wine — than they do in, say, going after peoples' brains.

In addition to Murray, Driver, and Sevigny, the film's cast list is pretty stacked, too. There's Steve Buscemi, Selena Gomez, Luka Sabbat, and Austin Butler, who appear to be playing characters terrorized by the zombies. And it looks like Tom Waits, Iggy Pop, and Carol Kane are playing the zombies. Even Wu-Tang Clan rapper RZA is in the trailer, wearing a parody UPS uniform.

Swinton's character, in particular, is a puzzling one. The movie seems to be set somewhere in the midwest, in the fictional Centerville, but Swinton has a Scottish accent. Her character doesn't have a name on IMDB yet, but she seems to be a morgue employee who also has some kind of sword-fighting experience. At one point, Swinton's character appears before an altar of some sort, which could either be an attempted joke about the controversy surrounding her Doctor Strange role, or an unfortunate followup to it.

Swinton's character aside, though, fans seem pretty excited for the sheer ridiculousness of the new movie. "This is the greatest trailer I've seen in ages. Count me in," one fan, @salmakia77, tweeted. "I'm in - zombies, Bill Murray and Adam Driver - perfect," another fan, @missadietonks, wrote. "Adam driver + tilda swinton + chloe sevigny X zombies = what will be one of the best films EVER," @devongriffiths posted. Clearly, there's a lot of excitement for the upcoming film.

Director and writer Jim Jarmusch has said much about the movie just yet. But fans are already loving the cast, which might be reason enough to see the movie. The ensemble includes plenty of talent, and it looks like The Dead Don't Die will appeal to a wide range of audiences. If comedy is more your speed than true horror, this could be the perfect summer movie to put on your calendar.