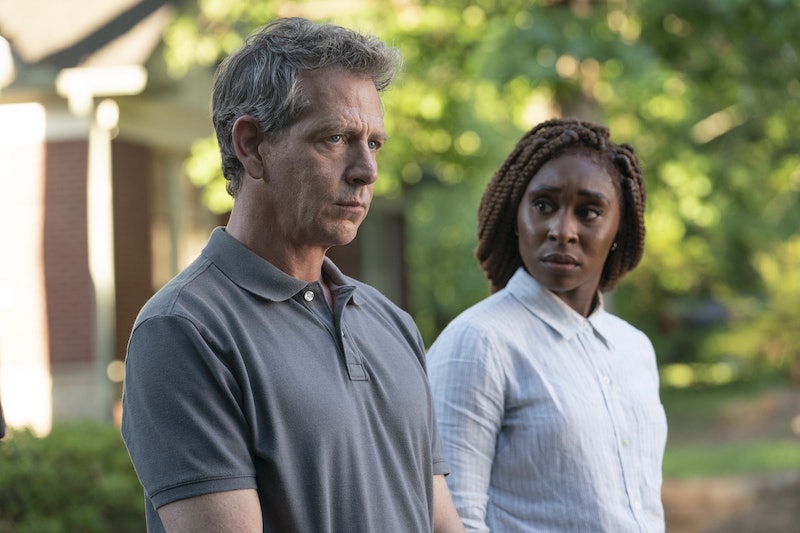 A new Stephen King adaptation, the same old question: "If I watch this, will it haunt my waking dreams until the end of time?" Not everyone has a high tolerance for horror, so asking if The Outsiders is scary beforehand can mean the difference between feeling pleasantly spooked or downright traumatized by the new miniseries. Those who scare easily are in luck: The Outsiders is more crime thriller than horror, and while things will obviously ratchet up in the second half of the season (and take a turn for the supernatural), the show is overall much more restrained than King's other works.

Based on King's 2018 novel of the same name, the show dives immediately into the main conflict: who killed 11-year-old Frankie Peterson? Frankie's body is found in the woods of Oklahoma, and his Little League coach Terry Maitland is at the top of the suspects list. Police detective Ralph Anderson doesn't want to believe that the well-liked Terry is to blame, but DNA evidence and several eye witnesses confirm that Terry was there. So Ralph arrests Terry right in the middle of a game, in front of most of the town.

It feels like a solved case, but then Ralph is shown conflicting evidence: at the time of Frankie's death, Terry was 70 miles away at a teacher's conference, and on video asking an author a question. Yet moments later, Terry is also seen wandering in front of a motel camera, giving the finger to whoever is watching. Meanwhile, a disfigured, hooded man lurks around town.

It's obvious something strange is going on, but how scary are the first two episodes? Not very, but let's break it down. When I used to get nervous about the content of a show or movie, I'd check out the IMDb "parental warnings" section to see in advance if sounded too intense for me. (No shame in my game.) So here's all the potentially scary scenes from The Outsiders' Episodes 1 and 2:

If we compare The Outsiders to film adaptations of King's other works like Pet Sematary, It, and The Shining, it's definitely not as scary (at least right now). It also falls below shows like American Horror Story, Castle Rock, and Haunting of Hill House in terms of gore and jump scares, as the main focus, at least at first, is about pinning down whether Terry is actually guilty.

That's not to say that watching The Outsider is a walk in the park, though. It's clear that things will only get weirder from here, and the show excels in ratcheting up the tension. You can tell early on that something is wrong, and the oppressive soundtrack only feeds into that discomfort. Both episodes are carried by a thrumming and discordant orchestra; the result is feeling like the story is winding you tighter and tighter, until that hooded figure finally reveals himself and the entire story as you know it breaks open.