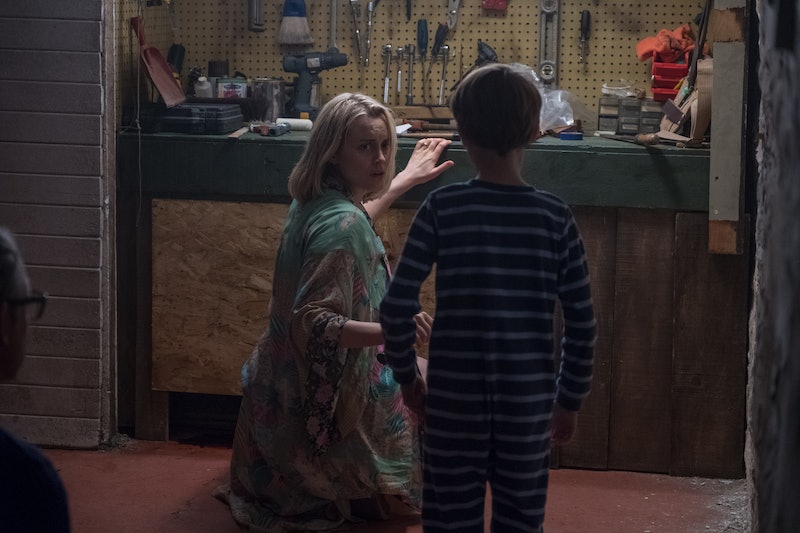 This coming Friday might as well be deemed National Bring Your Blankie To The Movie Theater Day in honor of the release of the new horror film, The Prodigy. Even if you don't scare easily, this movie could leave you shaken up for days. How scary is The Prodigy? It's a little early to call it the scariest movie of 2019, but just the trailer alone will probably give you a fright.

Taylor Schilling stars in the film as Sarah, a mom with a precocious and possibly possessed child. The first trailer featured a major jump scare, and it sounds like there are definitely more in store. In an interview with Entertainment Weekly, director Nicholas McCarthy revealed that the first cut of the movie was so scary that it had to be re-edited after a test audience screening. "The first time we previewed the movie, there is a section where people screamed so loud that we had to go back and re-edit the scene that followed it, because people were still recovering from what they had just seen, and they were missing the dialogue," McCarthy told the publication.

It's sort of a foreboding sign when a movie requires re-editing due to prolonged screaming. But that sort of ominousness may be exactly what you're looking for in a horror movie.

In the trailer for The Prodigy, Sarah's son Miles (Jackson Robert Scott), is sitting in an office being hypnotized. After a series of freaky-looking memories flash on the screen, the man conducting the hypnotism (Colm Feore) suddenly says, darkly, "I'm no longer speaking to Miles. I'm speaking to the person who has taken residency inside his body." The slow knocking of the office metronome adds to the tense vibe, and viewers aren't given any indication of who that person is inside the child, though you can bet their intentions are not good.

Schilling told Marie Claire that "more challenging" than the big scary moments of The Prodigy, were "the quiet moments between Sarah and her son. There’s a fine line between love and deep, deep terror, but the seesaw is very quiet and subtle because she always has to play 'mom.'" Even though Sarah doesn't know what's happening inside her son, she can't abandon him, which leads to some uncomfortable conversations.

While The Prodigy might seem on paper that it has a lot in common with other movies about possessed/haunted young boys like Insidious and The Babadook, the relationship between Sarah and Miles is what sets this new film apart. Schilling explained to Marie Claire that that relationship was what drew her to play Sarah in the first place. "It’s the story of a real mother warrior who had to go places she never could have dreamed of to protect her son and who’s forced to discover a far more resilient part of herself that she hadn’t accessed before," the actor said.

Her description almost makes the movie sound heartwarming, but don't think that that lets you off the hook from being scared sh*tless by The Prodigy. This little boy is definitely not normal.