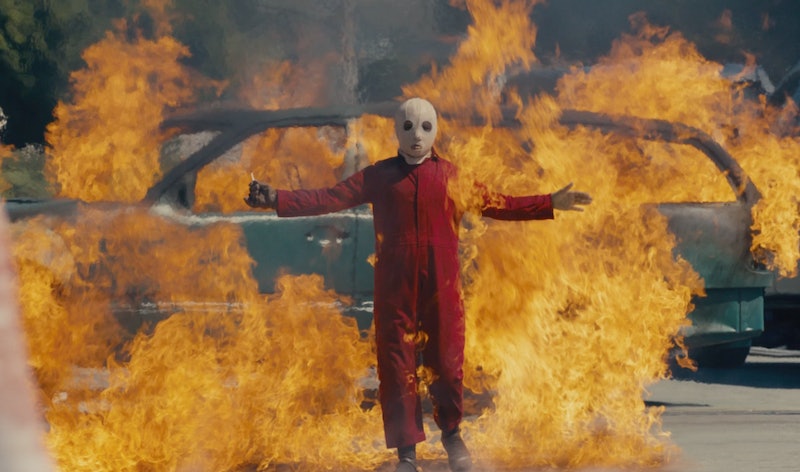 Warning: major spoilers for Us ahead! Jordan Peele's first feature Get Out garnered a Golden Globe Best Picture nomination... for Best Musical Or Comedy. With his new movie Us, out Mar. 22, Peele seems determined that no nominating committee will make that mistake again. Patterned after classic Hollywood horror with a thick layer of home invasion, Us will genuinely terrify you.

The film opens with a disturbing flashback hitting some major horror tropes: A young girl leaves a sensorially overwhelming boardwalk and walks into the dark. A thunderstorm breaks as she walks into a creepy mirrored funhouse challenging her to "find yourself." She does, and is traumatized to muteness by what happened in there; we don't quite know what. Flashing forward to present day, that little girl has grown up to be wife and mother Adelaide (Lupita Nyong'o), whose family is returning to the same beach for vacation.

Eerie moments accrue, including youngest son Jason (Evan Alex) encountering a man standing stiff and unresponsive on the beach, blood dripping from his hand. It all builds to the final night of their stay, when the lights cut out, revealing four silhouetted figures holding hands, standing silently outside the Wilsons' house.

Talking to Entertainment Weekly, Peele said, "For my second feature, I wanted to create a monster mythology. I wanted to do something that was more firmly in the horror genre but still held on to my love of movies that are twisted but fun.” The monsters in this case are The Tethered, doppelgängers of the Wilson family wearing red jumpsuits and bearing large, golden scissors.

When they descend on the Wilsons' house, the film veers into slasher territory. In the same EW article, Nyong'o described the attack, saying, "It turns into this relentless nightmare that taps into [Adelaide’s] deepest fears and ours as well — the idea that we might be our own worst enemies."

"Invasion movies — whether it’s a home invasion or The Birds or UFOs — pull from fear of the outsider," Peele said to The Wall Street Journal. "Right now we’re in a time where that fear is very thick in the zeitgeist: fear of North Korea making a bomb, fear of immigrants. But we’re realizing that the terror is homegrown, too... If we’re not asking how we got ourselves here, from all angles, we’re doomed to rinse and repeat."

Those squeamish about gore should know that there's definitely some scissor snipping and stabbing, but the real terror of Us comes from suspense, watching the family move around the dark, catching glimpses of the killers they're trying to escape. A card at the beginning of the film mentions miles of underground tunnels, and the plot utilizes the kinds of spaces favored by the genre: Attics, basements, claustrophobic tunnels, hallways with multiple doors each inviting possibility of attack, and abandoned areas.

Because of Adelaide's paranoia, the family at least has a fighting chance. Everyone else in the film is taken completely unaware by the fact they even have doubles, forget that the doubles are furious at their lack of autonomy and horrible "living" conditions. The utter ignorance of an entire class of people in a desperate situation isn't likely to terrify anyone sitting in the audience, despite the fact it's happening right now, all around us. But perhaps Adelaide's reaction to her double will make some viewers uneasy.

Adelaide sees Red even wanting what most of us would consider a normal life as an intense threat; that it's something Red's trying to "take away" from her. Those in power perceiving any attempt at rebalancing power as a threat isn't new; it's the backbone of colonial rule. And anyone familiar with the history of colonial rule shouldn't be surprised that Red's ultimate move is a violent uprising.

In an interview with Kinowetter, Peele explained, "I think the greatest monster this world has ever seen is the monster that happens when human beings get together. We are capable of extreme good, but we are also capable of extreme atrocity when we combine ourselves. And part of that is because by connecting we allow each other to get away with things, to not face the consequences." The Tethered are that accountability, a substrata of the world bearing the burden of our choices without access to any joys of life.

The film's bloodiness is tame compared to most slashers. Corpses and rabbits litter the film towards the end, and there are even more rabbits right at the beginning, so if you have leporiphobia, heads up. Most of the movie's frights are mere tension in the moment, but the uneasiness of what Peele's implying will linger long after you leave.

More like this
Blake Lively's Reaction To Ryan Reynolds' Dance Video Was Pure Thirst
By Stephanie Topacio Long
You’ll Be Able To Stream Bullet Train Before The Holidays
By Arya Roshanian and Radhika Menon
How To Stream Knives Out 2: When Will Glass Onion Be On Netflix?
By Radhika Menon
'Avatar 2' Now Has A Teaser Trailer & Release Date
By Jack Irvin and Alyssa Lapid
Get Even More From Bustle — Sign Up For The Newsletter