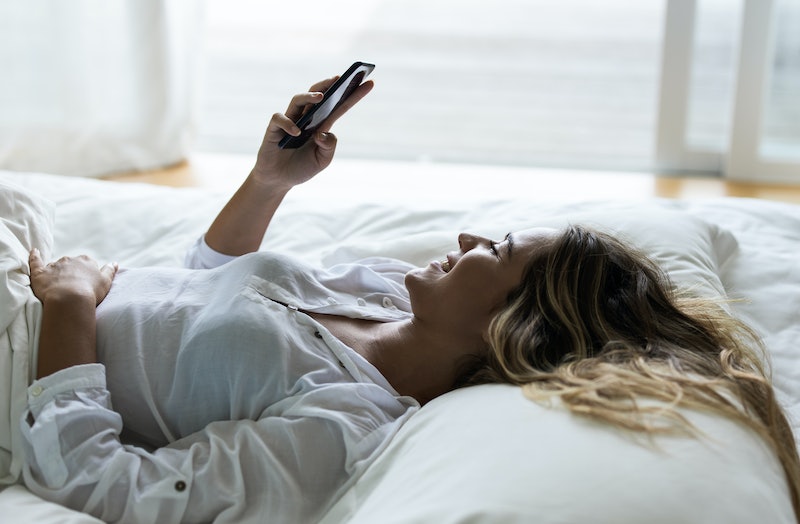 “Unlike viewing pornography, sexting allows us have more control over the interaction and can be empowering,” Dr. Wiggins says. “Power and control can be very arousing, so sexting can be a safe way to explore where desire really begins: in the brain. Sexting [also] allows us to anticipate a response from our partner, to build desire.”

“Depending on an individual's stress patterning, there can be heightened arousal when exposed to risky situations, or the body may shut down,” relationship expert and author Coltrane Lord tells Bustle. “The brain will either interpret the risky situation with a fight, flight, or freeze response, all of which we experience as heightened arousal and excitement to a point.”

Because the messages themselves are arousing and sexting has an added element of risk, Dr. Wiggins says that the act of sexting likely activates the body’s limbic system, which is controlled by the amygdala. The limbic system is how you respond to different stimuli. It’s the automatic fear response when, for example, a zombie jumps out at you in a haunted house.

If you only had a limbic system, your brain would be like “AH YOU’RE GOING TO DIE” and you would run away in real terror from the college student in zombie makeup. But another part of the brain, the hippocampus, helps you interpret that stimulus. It tells you “That’s a fake zombie! No need to flee in terror.” That rationalization of your brain’s primitive reaction to a scary thing allows you to feel pleasure in the fear — or, in other words, to enjoy the arousal that fear gave you.

When it comes to sexting, the feeling of doing something “bad” or “naughty” — and the very real risk of exposure that comes from sending sexy messages and images — can activate that same part of the brain that the haunted house zombie activates. But your rational hippocampus reasons with your emotional amygdala and that risk is translated into sexual arousal. “The art of finding the edge of arousal versus danger is key,” Lord says, when it comes to how your brain responds to sexts.

Of course, your body and brain aren’t separate entities — reactions in one leads to reactions in the other, and vice versa. In the case of a fear or arousal response, your body responds by increasing blood pressure, dilating your pupils, and slowing down digestion. You might feel warmer or notice red patches on your face and chest. Blood might also rush to your genitals and away from your “non-vital” body parts, like your hands and feet. These reactions are fairly standard things that happen to your body when you’re sexually aroused.

All of that is largely positive; generally, people like feeling turned on. But in some cases, your physical and emotional responses to sexting might feel more negative. On the top of that list: Shame.

“The negative reaction from someone sending a sext will be in the alignment of how they feel about the person they are sending it to, and their own acceptance of their sexuality,” Lord says. “If the sender doesn't have a solid relationship with the recipient of the sext, then remorse or shame can come up, based on their own sexual shame or measured appropriateness of the sext. Our brains and our bodies are so interconnected that if the brain interprets something as ‘wrong,’ our bodies will respond accordingly.”

When done with someone you trust, sexting can walk that fine line between pleasure and fear, creating a wave of sexy feelings. It definitely isn't the worst way to get your blood flowing.